Think You're Unlucky? Wait Until You See These 15 Cases Of The Worst Luck Ever.

Think You’re Unlucky? Wait Until You See These 15 Cases Of The Worst Luck Ever. 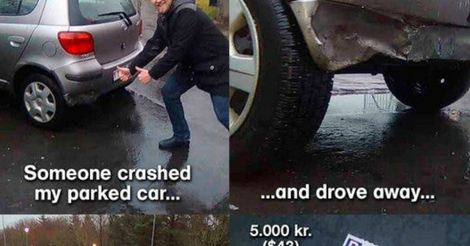 We’ve all had those unlucky days; you forget to set your alarm, you get pooped on by a bird (which is apparently good luck but we don’t get it), spill your coffee or get a month’s load of work to do in one day. We all know what I’m talking about here – we just don’t think it can get any worse.

You thought wrong. Check out these 15 people who would trade their luck for yours any day! Having someone crash into your car is bad enough as it is, and, of course, the car responsible is no where in sight; there’s not a note either. But then on top of that, you get bumped into a no-parking zone and get a ticket? When it wasn’t your fault – you were parked in the correct place, but you can’t do anything about it? Now that’s just unlucky. Tragically, the house that Hurricane Isaac destroyed was actually one that a reality TV show had just spent $20,000 remodeling. Before Isaac hit, Melanie and her family attempted to evacuate but their truck broke down – because nothing good happens for this family when hurricanes are near.

You would think after five hurricanes and five destroyed homes that Melanie might get the hint: it’s time to move out of the hurricane alley – now. Maybe she can try her luck with the overdue earthquake threatening the west coast. National Park Ranger Roy Sullivan has been struck by lightning a record seven times. Roy received his first jolt way back in 1942. He received the next six shocks between 1969 and 1978. Roy has had his hair burned off four times.

He was even knocked unconscious when a lightning bolt, so intent on getting him, bounced off a tree and into his car through an open window. Roy’s bad luck got so bad he started carrying around a can of water to douse himself should lightning, inevitably, strike again.

4. Only person to ever have been hit by a meteorite.

On November 30, 1954, Ann Hodges was just taking some me time and napping on her sofa when a meteorite burst through her roof and hit her. After getting cleared by the hospital, Ann and her husband were left with a giant chunk of space junk.

At first the US Air Force flew in and took the rock. But Ann lawyered up and got it back. Only to have her landlady claim the rock actually belonged to her since it damaged her house. Tired of all the legal battles, Ann eventually donated the meteorite chunk to the Alabama Museum of Natural History.

5. Whole town wins the lottery except one guy. Every year, Spain hosts a massive lottery called, “El Gordo.” And one year, the 70-household village of Sodeto won! All of the households, except for Costis Mitsotakis’, bought into the lottery and when their number came up, the town shared the $950 million jackpot.

The entire town except for Costis. The home association selling the lottery tickets had forgotten to knock on Costis’ door so he never bought into the village-wide ticket purchase. Harry, his dog Jerry, and a few friends went ice fishing in Minnesota. But the ice was frozen solid so Harry came up with the poorly thought out idea to throw a stick of illegal dynamite onto the ice to blow a hole.

Unfortunately, dogs aren’t great at differentiating between wooden sticks and sticks of dynamite. So when Harry threw the stick, his dog Jerry went running.

Harry and his friends managed to get out of the way, but their truck went through the ice and sunk to the bottom. Of course, since the dynamite was Harry’s fault, his insurance company refused to pay for the truck. That’s what you get, Harry. Now give us a minute to shed a tear for poor innocent Jerry the dog (RIP). Thinking her luck might change on a new boat, Violet took a job on the Titanic in 1912. Well, we all know how that one turned out.

Four days later, Violet was escaping off of the sinking boat. Third time’s the charm, right? Nope. Violet took a job on the Brittanic in 1916 only to have it sink on her. Violet had to jump off of her lifeboat and swim. You might say that Tsutomu Yamaguchi was both the luckiest and unluckiest man to ever live. On one hand, the poor guy had to experience two atomic bombs within days of each other. But on the other hand, he lived through both experiences.

In 1945, Mr. Yamaguchi was travelling to Hiroshima for his work as an engineer when the infamous atomic bomb, “Little Boy”, went off just two miles from him. Desperate to leave the city, Tsutomu took the next train back to his hometown, Nagasaki.

Just as he got done retelling his death defying story to his boss back home, the second atomic bomb, “Fat Boy”, hit Nagasaki. Again, Tsutomu was a short two miles from the blast. Luckily, he survived. That’s not to say that Tsutomu wasn’t hurt; he shattered an eardrum, received extensive burns and was temporarily blinded.

In a cruel twist of fate, the radiation Tsutomu was exposed to during the blasts was likely the cause of the stomach cancer that claimed his life in 2010. Imagine you’ve had the worst day at work. If you’re a woman, then you’re cramping. If you’re a man, imagine your internal organs are being grabbed and twisted by a hulk hand – pretty much the same thing. You’re on the verge of crying, and all you want to do is get home, get cozy, and watch your favourite film or TV show – eating some ice cream.

You’re finally home and just moments away from enjoying your ice cream. You can practically taste it. And then, this happens. Yeah, that’s what we mean by unlucky. Now we’re salivating and we’re sad.

Some may think it was unlucky that his girlfriend found out he was cheating and decided to retaliate – but at the end of the day, it was his own fault. In 1962, Frane Selak was on a train that crashed into a river. A number of people drowned but Frane survived to take his first airplane ride. The plane crashed, sending Frane out the door and onto a haystack, and killing 19 others.

From there Frane went on to survive a bus crash, a car crash, another bus accident and two burning cars. Perhaps he should just walk to the shops next time…

12. In the wrong place at the wrong time – every time. Jason and Jenny Cairns-Lawrence have experienced not one, not two but three terrorist attacks while vacationing in three different countries.

On September 11, 2001, the couple was vacationing in New York when horror struck. Four years later, Jason and Jenny found themselves in London during the infamous 2005 subway bombing terrorist attacks.

And then in 2008, the Cairns-Lawrences decided to take a trip to Mumbai, India. You’d think they would have learned their lesson by then. While in Mumbai, Jason and Jenny saw the worst terrorist attack in India’s history. Maybe they should just set up a paddling pool in their back garden… If Jason and Jenny Cairns-Lawrence want to talk to someone about their bad luck of being in the wrong place at the wrong time, they should call Regina Rohde.

Regina was a high school student at Columbine High School during the 1999 horrific school massacre. In fact, Regina was in the very lunch cafeteria where the perpetrators first opened fire and she was forced to run for her life.

Eight years later, Regina found herself in a very similar situation. She was a graduate student at Virginia Tech when another school shooting horrified a nation. Luckily, Regina hadn’t left her home on the morning of the Virginia Tech shooting so was spared having to evade gunshots for a second time. Can someone cut this girl a break? She just wants to get her education. Jeanne Rogers specializes in being unlucky. Like Roy Sullivan, Jeanne has been struck by lightning, but only twice. And like Violet Jessop, Jeanne isn’t so great on boats – at 18 years old Jeanne was on a cruise ship and fell over the railing into the ocean.

Jeanne’s bad luck also includes being mugged, shot at and falling into an open manhole. Perhaps worst of all was the unlucky day a bat flew at Jeanne’s head and got stuck in her hair. The panicked bat began clawing at her scalp and peeing in her hair until Jeanne could drive herself to the vet and get the bat out. Oh Jeanne. We feel for you, girl.

15. Being mistaken for a fire hydrant… by a dog I think this says it all, to be honest.

Enjoying a nice day in the sun, spending time with ‘mans best friend’ – I don’t think they’d be best pals for quite a while after this.