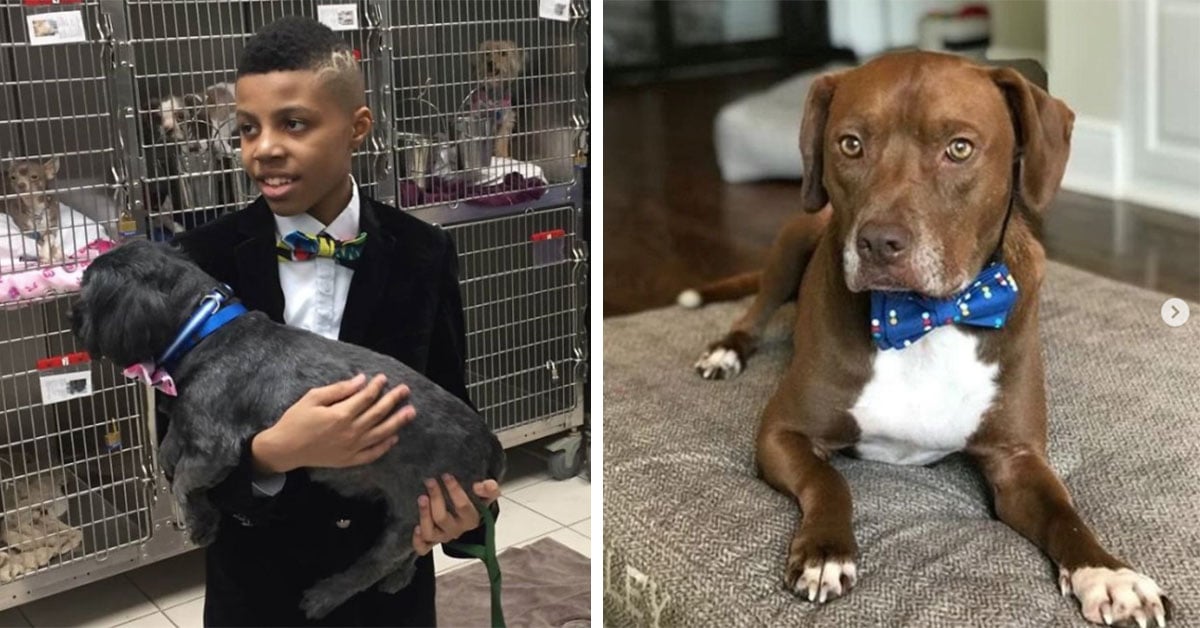 The hashtag #adoptdontshop has been growing in its use in recent years, but there are still some poor, kinda cute animals in rescue shelters waiting for their fur-ever home.

That’s where knight-in-shining bow tie Darius comes into play. At just 12 years-old, this freakin’ cutie creates and donates bow ties from scratch to try and catch the eyes of future pet owners. Who knew millennials could be so sweet?! There might be a reason as to why Darius feels so strongly about helping out the pooches and kitties. He was diagnosed with speech, comprehension and fine motor skills at just two years old! However, he has never let any of them stop him. (If it was me I’d have just given up and be on the couch with Netflix all day).

So how did Darius get into bow tie making?

The young boy got into arty farty crafting when he was eight years-old. He was helping his older sister, Dazhai, create bows that she was making and this helped to develop his fine motor skills.

No one knew about his creative skills! After a few years of just creating bows for fun, he decided to turn in passion into something that could help the world.

At just eleven years-old Darius became the CEO of ‘Beaux & Paws’ after seeing how many dogs were being put into rescue homes – and even euthanised! – after the desolation of hurricanes Harvey and Irma in 2017. Being a dog lover himself – at least the child knows what the superior species is – he decided he couldn’t stand it any more and started to create hundreds of designs to donate to animal shelters in the US and the UK.

That does mean that cats now wear the bow ties… I suppose it is better than them dying.

Here are some bow tie designs I have been working on for the #pawsomemission I will be shipping some and donating some to an animal shelter today. I just want to say again thank you so much to everyone for all of the love and support you are showing to the dogs and myself. Stay tuned for updates. Thank you to @windhamfabrics for donating some of these fabrics? They are great! #pawsomemission #sirdariusbrown #bowtie #dapper dog #divadog #adoptadog #rescuedog #shelterdog #adoptdontshop #doglover #ilovedogs #windhamfabrics #batikfabric #bekind #giveback #staypawsome?

Darius’ work is so well known and appreciated that he even got a letter from the one and only Barack Obama! Naturally, he posted a photo of the letter on his instagram (typical millennials, huh?) with the following caption:

‘I have never been so excited and shocked and speechless in my life. Today have to be one of the greatest days of my life. What an honor! I can not believe I received a letter of recognition from PRESIDENT BARACK OBAMA!!!!!!! @barackobama Thank you so much. I’m truly honored. You are my idol!’

You won’t melt my heart of ice with captions like that, boy. Saying that, rather a letter from him than from a certain someone who is in power now, right?

That isn’t the only recognition that Darius has gotten. He’s received the Leadership Award from Leaders of the Future No Limits; Outstanding Achievement Award from the WDIB Conference; the Youth Changer Award from “Excel Honors”; and (as if they aren’t enough) he’ll be receiving the Jasmina Anema Youth Award from the “Black Cotton Foundation” next month.

I guess it’s not bad going for a kid who has only just got out of diapers.

Darius’ latest venture is his ‘PAW-some’ mission – he is trying to volunteer at rescue shelters across five states, taking his bow ties with him of course!

His sister has even launched a fundraising page for the mission, stating:

‘He motivates and inspires me everyday. He is such an incredible young man and I will do everything I can to help him on his journey. I’m supporting him in his cause 100% and I hope you will join me. No donation is too small’.

You can donate to the PAW-some mission here.