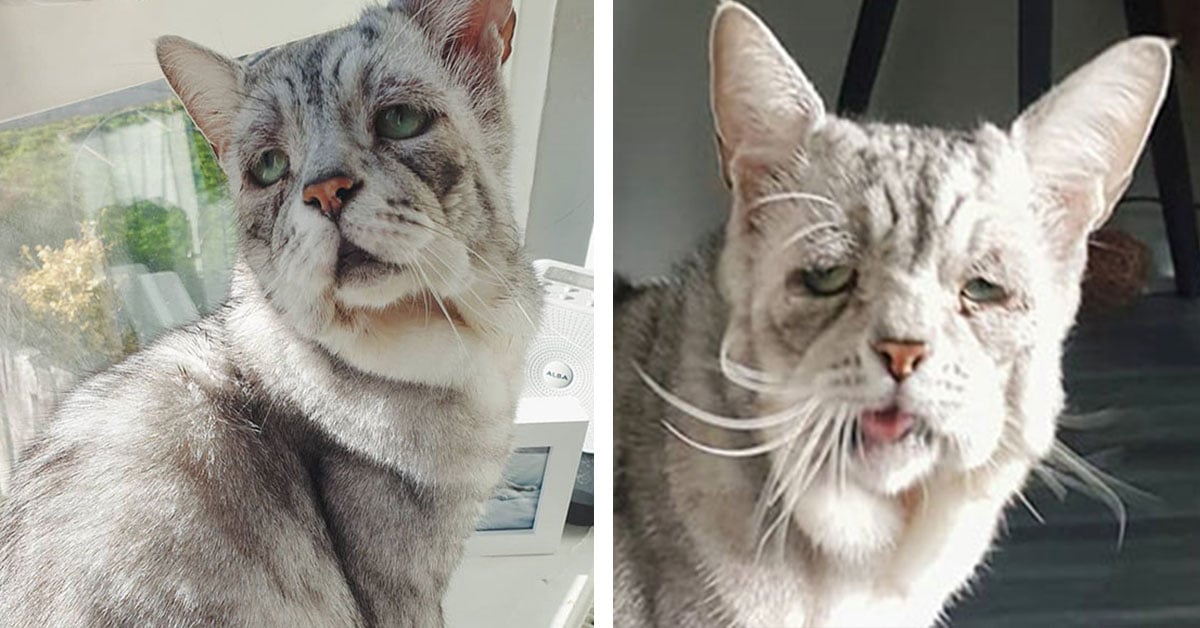 Pets are just the greatest, aren’t they? They love you unconditionally, they never judge you (that you know of) and they never talk back… all you need to do is feed them, walk and them and generally just keep them alive.

If you’re an animal lover like me, then chances are that you’ll pretty much see any four-legged, furry type creature and immediately think “OHHHH THEY’RE SOOOO PERFECT!”, no matter what they may look like. As hard as it may be to believe, however, for some pet owners, this isn’t always the case. So what happens to those animals who turn out to be a little less than perfect? Well, when a wonderful woman named Georgina Price and her equally wonderful fiance Christopher Lardner adopted their first-ever rescue cat, who they named Herbie, he was 16-months-old and was very near the end of his precious life.

Sadly, little Herbie died a few short months later, and even though the couple had only known him for a teeny tiny while. they were absolutely heartbroken by his passing. It did, however, open up their hearts so wide that the space could be filled by someone new. And boy oh boy, what a little superstar they found! “I just kept thinking about all the animals that might only have five months left and would spend the whole of that time in a shelter,” Georgina told Meow. “We decided we would look for an extra special cat that might take a little longer to find a home.” Keeping all this in mind, while browsing the web, Georgina stumbled upon little Toby and Quinton, who were a pair of bonded cats who both were in search of a new home, together.

“I saw them on the RSPCA website and fell in love with their sweet little faces,” Georgina said. Quinton, who was a 7-year-old black and white cat, and was missing all of his teeth and then Toby, who was a 6-year-old short-haired feline, and had a LOT of loose skin. It’s safe to say, they made quite the quirky pair indeed1 Eventually, Georgina found out that Toby had actually been diagnosed with Ehlers-Danlos syndrome (EDS) or feline cutaneous asthenia (FCA), which is a congenital condition that can cause unusually stretchy, loose, and fragile skin due to a lack of collagen.

“We’d never heard of EDS before we found him, we just knew that he needed a loving home and we have so much love to give,” Georgina said. Georgina and Christopher then went and visited the duo at the RSPCA where they lived in a special unit.

“They were both terrified and huddled right at the back. Toby just hid behind Quinton the whole time, trembling.” Georgina was also able to pet Quinton, however, she wasn’t able to touch Toby because the poor little thing was just too darn scared.

All things considered, she and Christopher were still super confident they were ready to take good care of the exceptionally nervous special-needs feline, so of course, they adopted both Toby and Quinton. And they’ve never looked back since! Amazingly, It didn’t take long for Toby and Quinton to find peace in their new home. Just seven short months later, these two are doing perfectly fine… and these are the pictures that prove it! Toby’s delicate skin condition, however, makes him prone to injury even when he’s simply grooming himself or playing with his bestest bud, Quinton.

“Toby and Quinton are inseparable and Quinton tries to clean up Toby’s face when possible and when they play, Quinton knows to keep his claws retracted.” Due to the Ehlers-Danlos syndrome, Toby’s stomach always hangs down to his knees, and Georgina and Christopher are really concerned about the effect the added weight of this extra skin might have on his long-term health.

“EDS can cause joint problems and the excess weight of his skin makes us think that he will have problems in later life,” Georgina explained. In order to help try to minimize stress on his poor little joints, Toby’s owners always try to prevent him from jumping up or down from high places, but even though he requires a bit more extra care, Georgina and Christopher truly couldn’t be happier with Toby and his bro Quinton.

Heck, I couldn’t be happier with them either! Just look at those sweet little faces! His condition aside, Toby is just your average kitty. He enjoys bird watching, playing with bouncy balls, and snuggling with his owners.

“He loves belly rubs and will plop himself next to you and look at you, waiting for you to rub his belly,” Georgina said. Georgia hopes that by sharing Toby’s story with the world, it will not only raise awareness about his rare condition but will encourage more people to consider bringing special needs cats into their lives, which is a truly incredible thing to do.

“It doesn’t take any more to love them and despite whatever it is that may make them ‘special needs’, they are still beautiful animals with their own amazing personalities, likes, dislikes, and the ability to love you back.” At the end of the day, special needs pets only want what we all want – someone to love us, feed us, and make us feel safe. And it’s as they say, our differences are what makes us, us! If we were all the same this would be one pretty boring planet, don’t you think!?

Doesn’t he look like the cartoon version of a very wise, old pussy cat!? And of course, here’s a picture of the very photogenic dynamic duo enjoying their dinner time together. And who doesn’t love a close-up shot of the cat of the hour himself!? What a distinguishably handsome boy indeed! Just two tired boys napping together after a long day of being incredible. I feel you guys! JUST LOOK AT THIS BIG SMUSHY WUSHY BALL OF FUR! I feel like crying he’s so freakin’ adorable! And here he is, of course, just looking like an absolute BOSS rocking out in his very trendy unicorn jammies. And last but by NO means least, no kitty would be complete without his very own Garfield blanket! He wouldn’t be as content as this fabulous feline, that’s for sure!

So remember folks, if you’re ever thinking of making the big, wonderful leap of taking a rescue animal into your home, don’t forget about the older felines, or the ones who may have special needs. They need love just like the rest of us!

Have you ever adopted an animal who has special needs, or know somebody who has? Maybe you’re a regular foster parent for these precious creatures? Either way, let me know in the comments! And don’t forget to spread Toby and Quinton and their amazing story far and wide by sharing this with all your friends and family too!