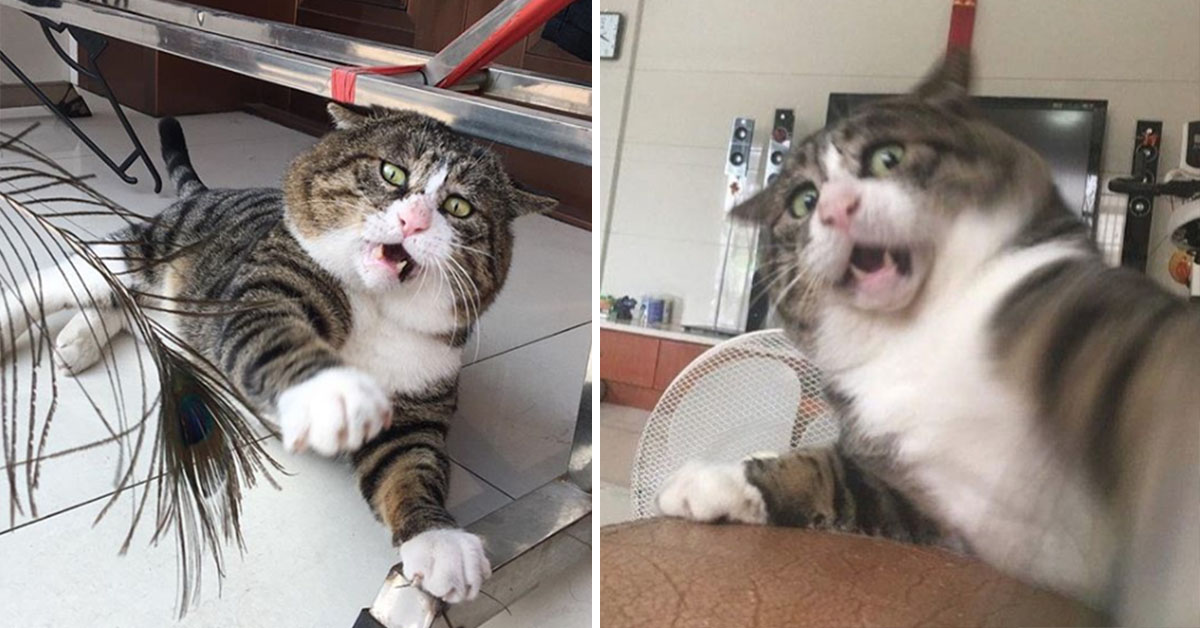 Meet Ah Fei (which means ‘fat’ in Mandarin), the most expressive cat ever who has been going viral for his overly emphatic and dramatic reactions!

Ah Fei was rescued from the streets by his owner Tang Chang in Jiangsu, China, and now the pair enjoy engaging in all sorts of activities, most of which cause a meme-worthy reaction from the adorably chubby Ah Fei! Here are 15 of his most adorable, relatable, and hilarious reactions as posted by his owner!

1.) When You See Someone fiddling With The Thermostat! Clearly Ah Fei is a little scared by plants! Either that or he’s just seen the bathroom sales after the holidays!

2.) The Look Of Quiet Concern This is the sort of expression that screams, ‘are you sure that’s a good idea?’ when you absolutely know that it isn’t a good idea! I get this expression in the middle of the night when I go for a late night glass of water and startle myself with my own reflection in the window above the kitchen sink. You’d think I’d remember but I never do! Do you ever just look at people and think, how do you survive in the world? I get that a lot looking at the younger generation, and it seems that Ah Fei shares my concern. That is one worried looking cat! The way his arm is outstretched towards the camera makes it look like he’s asking for help! I’ve never seen a cat with heavier brows before in my life, that’s where most of the expression comes from! It has the ability to furrow its brow like an elderly human male when there are people playing music too loud next door!

7.) When You Remember It’s Valentine’s Day… A Day Too Late There’s nothing like the crushing feeling of realizing you’ve forgotten something crucially important just a few moments too late. Ah Fei here exhibiting the same level of instantaneous nihilistic dread.

Aside from whatever that pug is trying to do to that pig (which we’re just going to gloss right over!) Ah Fei looking that wildly unimpressed could be my spirit animal! I wish I could ever feel anywhere near as relaxed as this cat does here! There’s always something out to stress me out! This expression has a number of uses, one of them being when you think you’ve aged like a fine wine such as Al Pacino has, but you catch your reflection and see that you look like someones managed to further deflate a raisin. Ah Fei here looking like he’s spent a heavy afternoon questioning the nature of his own existence, or he’s eaten too much and is feeling bloated… they’re basically the same feeling deep down!

12.) That Moment When You Take A Selfie And Think You Look Fly As Hell This is why you always take a selfie from above, looking down. I learned that from Instagram influencers, along with a flagrant disregard for any moral integrity and a disgusting obsession with material wealth! He’s got his mooching game down to a fine art! That’s an expression that is lying about not having been fed. Up until now you would be forgiven for thinking that this cat has a life filled with trepidation and fear, but Ah Fei’s owner does occasionally post photo’s of their cat looking very pleased with their new life! His eyes are so wide and clear you could use them as mirrors! It’s no surprise this cat is as chunky as he is, with a face like that it’s a miracle anyone could resist giving him whatever he wanted!

You keep doing what you’re doing though Ah Fei, if I could get people to give me their snacks as easy as that, then I’d have eaten my way to an early grave a long time ago!

So those were 15 of Ah Fei’s most expressive reactions! He really is one heck of an expressive cat! Let me know which of his expressions you related to the most, and be sure to tag anyone who you think would enjoy seeing Ah Fei!