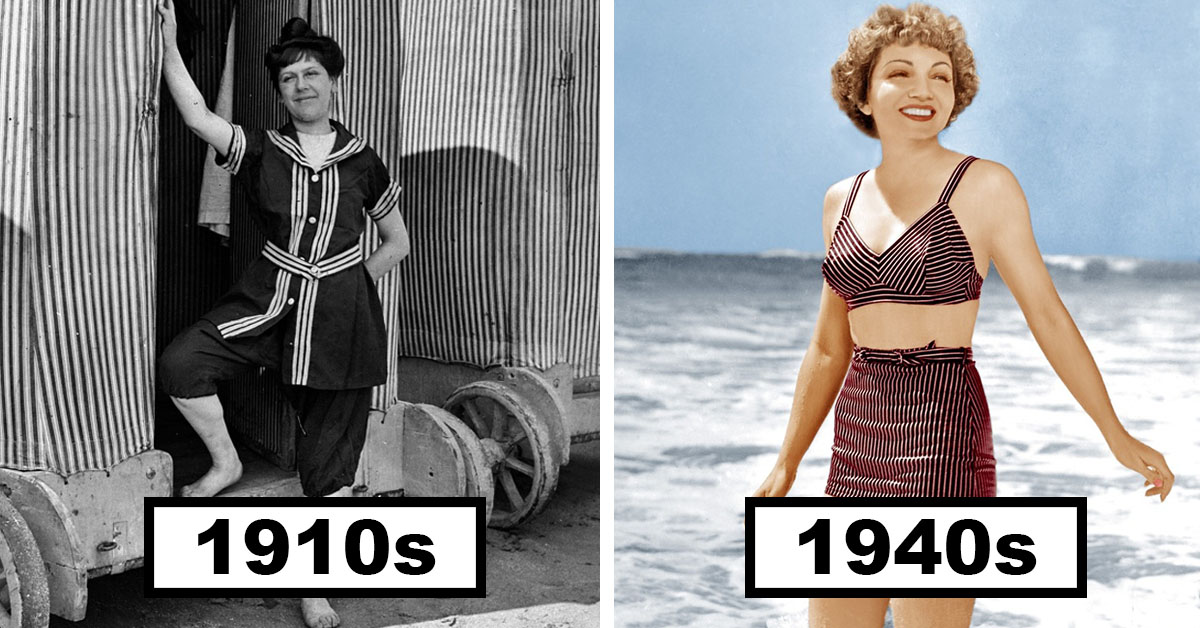 It’s no secret that fashion has changed considerably over the last bazillion decades. In fact, these days it feels as though fashion changes quicker than I change my own freakin’ underwear! But the interesting question is; how exactly has it changed? Well, when it comes to swimwear, up until the end of 18th century, people – believe it or not – bathed either in their underwear or completely naked, and they had absolutely no idea that they even needed a specific item of clothing for it.

Alas, things changed a lot when people began to travel as tourists. Since the moment the first swimsuits appeared, they had to withstand the real test of time, and I’m about to show you the process of exactly how they did that.

So strap yourself in and prepare yourself to take a merry jaunt down memory lane – warning, it’s gonna be one heck of a ride!

Representatives of ‘higher classes’ were most certainly not used to undressing in public. So, there was a need for clothing items that they could spend time on the beach in – thus, the first swimsuit for women consisted of a dress and wide pants, while men bathed in knee-long trunks and a top that covered their hairy chests… ohhhhh, so very sexy!

In later years, the swimwear fashion was clearly influenced by the Olympics. When swimming became an official sport of the games, it was SUPER obvious that big swimsuits prevented athletes from achieving the best results.

So, in 1912, female swimmers surprised the public with their revealing swimsuits showing their arms and legs… so SCANDALOUS!  Of course, after that many women wanted to follow their example, and swimwear became more revealing.

Then in the 1930s, the appearance of swimsuits was pretty darn similar to those from the previous decade apart from the fact that they started to be made in a variety of different colors. Also, thanks to the one and only Coco Chanel, tanned skin became super trendy too and women began to add different accessories to underline their tan. Men were now allowed to show their chest and wear shorts, lucky us eh ladies?

There’s no denying that World War II literally transformed ALL areas of life, including swimwear. For obvious reasons, it became necessary to reduce the quantity of fabric for clothing production, and that my lovelies, is exactly how 2-piece swimsuits came to be.

Louis Réard, who ran an underwear family business, made the observation that women often rolled up their swimsuits for a better tan. This then inspired him to create the bikini (whether that’s a good or bad thing, I’m still undecided!).

Eventually, in 1946, he introduced this new model of a swimsuit for women. The reaction of the public was understandably controversial because people were just NOT ready for such a revealing item of clothing. Which these days is a reaction so crazy to think about, amiright?

Despite the uproar, the movie industry adopted the bikini pretty much immediately because girls in revealing swimsuits attracted audiences (shock horror) and also provided an amazing box office return. In fact, the first woman who actually dared to show up in a revealing swimsuit was the ever so fabulous, ever so charming Brigitte Bardot!

Moving onto the 1960s, which is when fashionistas chose different models of swimsuits, but the main thing was that swimwear was now made of a marvelous new elastic and a fast-drying material called Lycra… maybe you’ve heard of it!?

By the 1970s, women literally just couldn’t resist the bikini any longer and so started buying this teeny tiny swimsuit which was soooo convenient for getting the perfect tan. The manufacturers were so inspired with the sudden demand for this model, that they began to add “kini” to all other swimsuit models. That was how the monokini appeared — which, if you didn’t know, is a sideless one-piece swimsuit.

And here we are in the fabulous 1980s, when one-piece swimsuits were back in fashion and better than ever, all because pool parties became popular. However, those who were trying to get tan still preferred the bikini, which just became smaller and smaller with every passing year.

Of course, who could ever forget the 1990s? The decade when the Baywatch TV show was extremely popular ALL over the world… and it shows.

Many people were – unsurprisingly – fond of the episode where Pamela Anderson and her colleagues were running along the beach in slow motion, which means that it’s absolutely NO wonder that the red one-piece swimsuit of Baywatch became one of the most popular models during that time.

The 2000s is a very strange decade, to say the least. At this point, the mini-bikini was ranked first in popularity and ruled over all once again! But it was now combined with a pareo of different sizes, from a short skirt to a big ole’ cloth which could be transformed into a dress or a long skirt. We were all about the versatility that decade!

It’s hard to forget but just in case you did – 2010 was the year when the single most uncomfortable swimsuit model to date — the monokini — came back in fashion. Yes, okay, they looked glamorous as hell BUT they like, totally, ruined your tan. Another difficult model was the bandeau (most frequently strapless) which only looked good on certain body types (aka… teeny tiny ta-tas!)

And last but by no means least, this year the most fashionable models are high-waisted retro swimsuits (these are 100% my favorite style, by the way), sporty swimwear in neon colors, and, of course, a classic bikini for a perfect tan… which seems more important today than it ever has been before! Go on then – what was YOUR favorite decade for swimwear? Are you more of an eensy weensy teeny weeny yellow polka dot bikini kinda gal, or are you partial to a bit of covering everything but the ankle realness? Let me know in the comments! And don’t forget to share this journey down memory lane with all your fabulous friends and family too! AAx