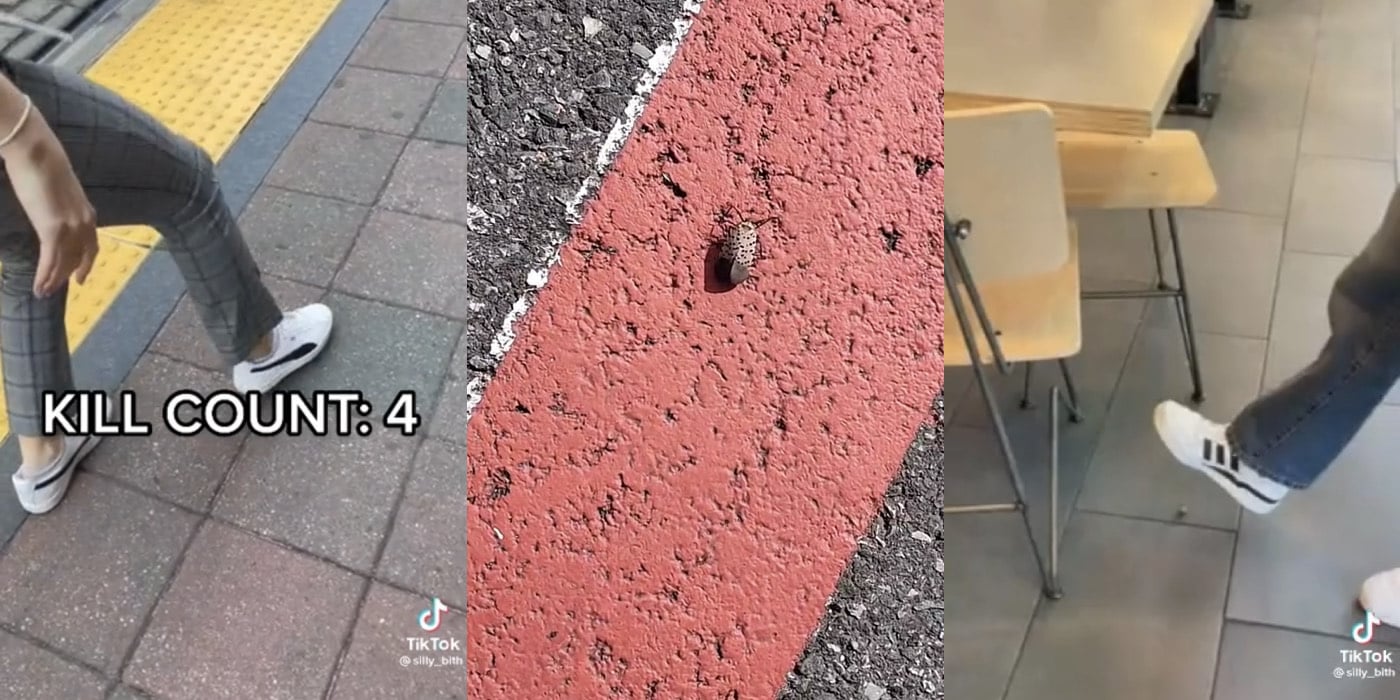 See it, stomp it. That’s the new state-approved slogan of New York. The city is setting aside any efforts to curb homelessness and drug epidemics so that they can recruit the entire population to destroy every lanternfly in sight. Alarmed by the volume of these insects, Senator Chuck Schumer wants to eliminate them with the help of federal funding.

The spotted lanternfly is an invasive pest from Asia that can feed on a variety of plants. Unlike similar pests, they fly slowly and do not bite. Apparently, they don’t move as quickly even if startled, making them easy for New Yorkers to stomp on. They were first discovered in Pennsylvania in 2014. Since then, they’ve been found in New Jersey, Delaware, Maryland, Virginia, and New York.

They are believed to spread through human activities as they lay their eggs on vehicles, outdoor furniture, and even stones. Are they dangerous to humans? No. They do not bite or infect humans in any way. However, their invasion into the US of A is believed to have had a drastic impact on the economy. Lanternflies will reportedly kill crops, including grapes, apples, and blueberries. They also drink sap out of tree trunks, resulting in the weakening of forests.

One study revealed that the insects can cause economic damage up to $324 million and lead to the loss of 2,800 jobs annually in Pennsylvania alone. In 2022, they’ve been spotted near Wall Street, on the Upper East Side, near the UN headquarters, and on trees in Brooklyn and Staten Island among more regions. 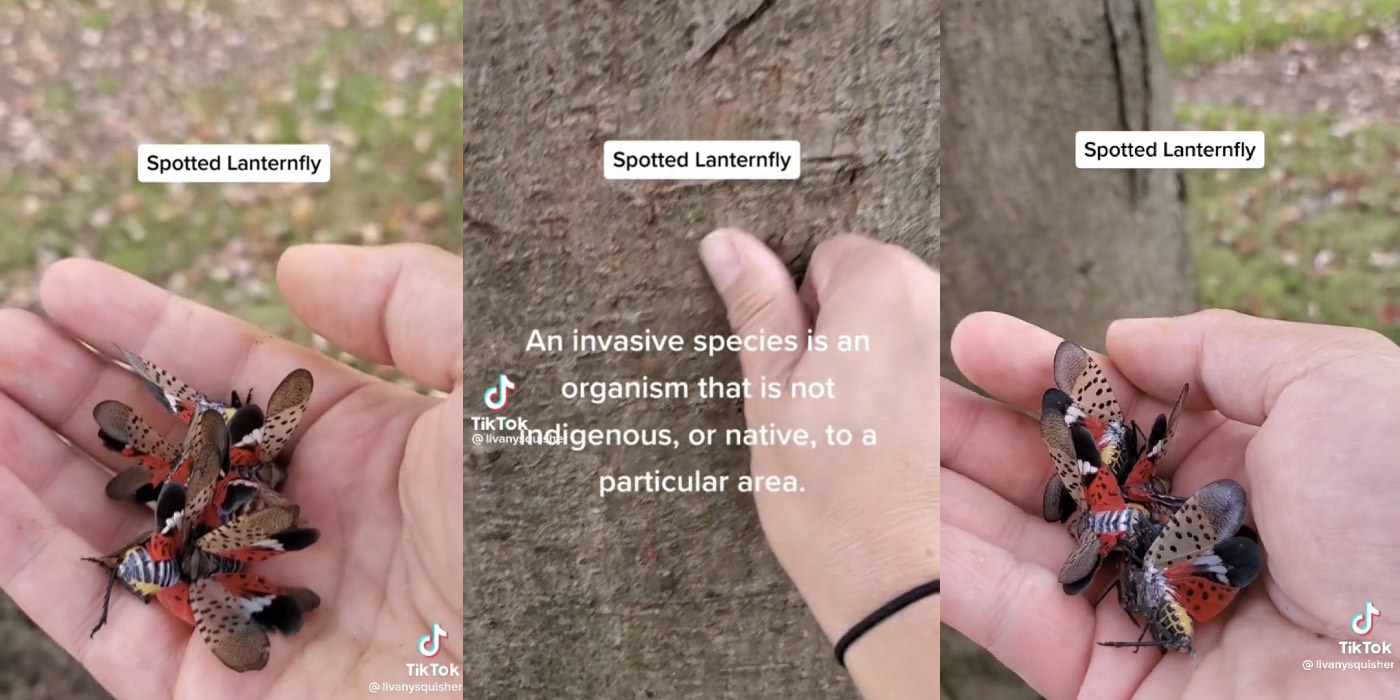 TikTokers, perhaps more than anyone, have stepped up to the plate when it comes to killing lanternflies.

Liv Volker, a 47-year-old Pennsylvania health-care worker, first learned about the lanternfly in 2019 through her husband, who worked at a winery where the grapevines were covered with swarms of them. Volker then started seeing the insects at her job “I was outside screaming and stomping, because they were all over the hospital,” she said. When they turned up at her favourite park, she decided enough was enough.

Volker joined TikTok in September 2021, immediately posting a seven-second clip of her squishing a lanternfly with her bare hand. The video went viral. “There’s clearly a lack of education going on,” she said, “so I was just like, ‘Okay, I will become the person’.” Volker deleted all the videos unrelated to lanternflies from her account and changed her handle to @Livanysquisher. Her dedication have since made her the biggest lanternfly-squishing influencer on TikTok where she has amassed tens of millions of views on her videos.

While intended to inform the public, Volker isn’t naïve to the idea that people may watch her videos solely out of morbid curiosity. “I do know that the ‘squick’ factor helps get viewers. People like gross things. There’s this little pop sound when they go in, and it’s just beautiful,” she says. 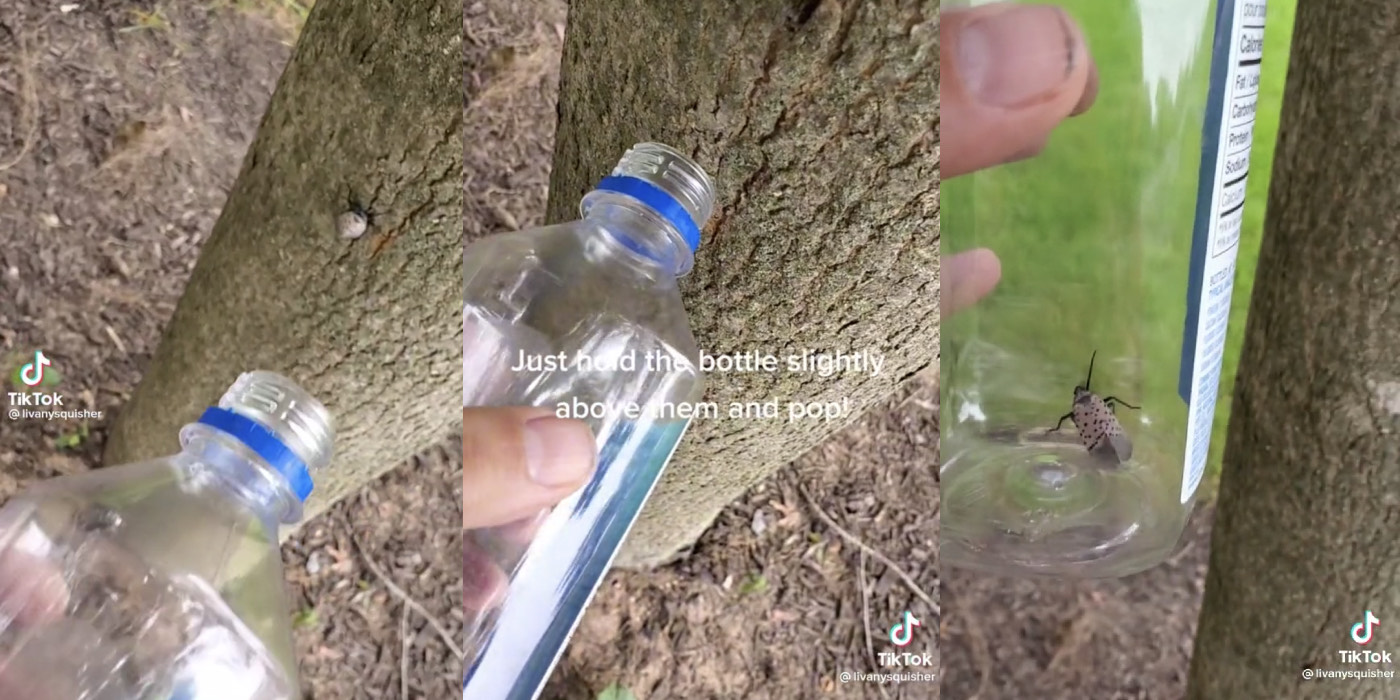 Though the reactions she gets are about “85 percent positive,” the remainder are vocal about the anti-bug violence. Volker said they “just can’t wrap their head around the fact that you have to be actively un-aliving these things left and right.” Over in TikTokLand, using the word un-alive/un-aliving is a way of saying kill/killing without the app’s algorithm penalising you.

Is there any way of handling this crisis without stomping your foot on an innocent, helpless insect? Yes, there is.

Volker has a less-messy, less-brutal, method using a plastic water bottle or cup with a domed lid. To execute it, you place the mouth of the bottle over your targeted lanternfly, sending the insect flying back. “They jump backward when they see the sides of the bottle, not realizing there is a tunnel behind them.”

Through this method, she claims to have caught around 50 lanternflies in 15 minutes. Once your flies are trapped, freeze the container overnight or either add hand sanitizer or rubbing alcohol to the container and seal the lid, which knocks the lanternflies out. Good luck!