TikTok’s most popular couples (and how they met!) 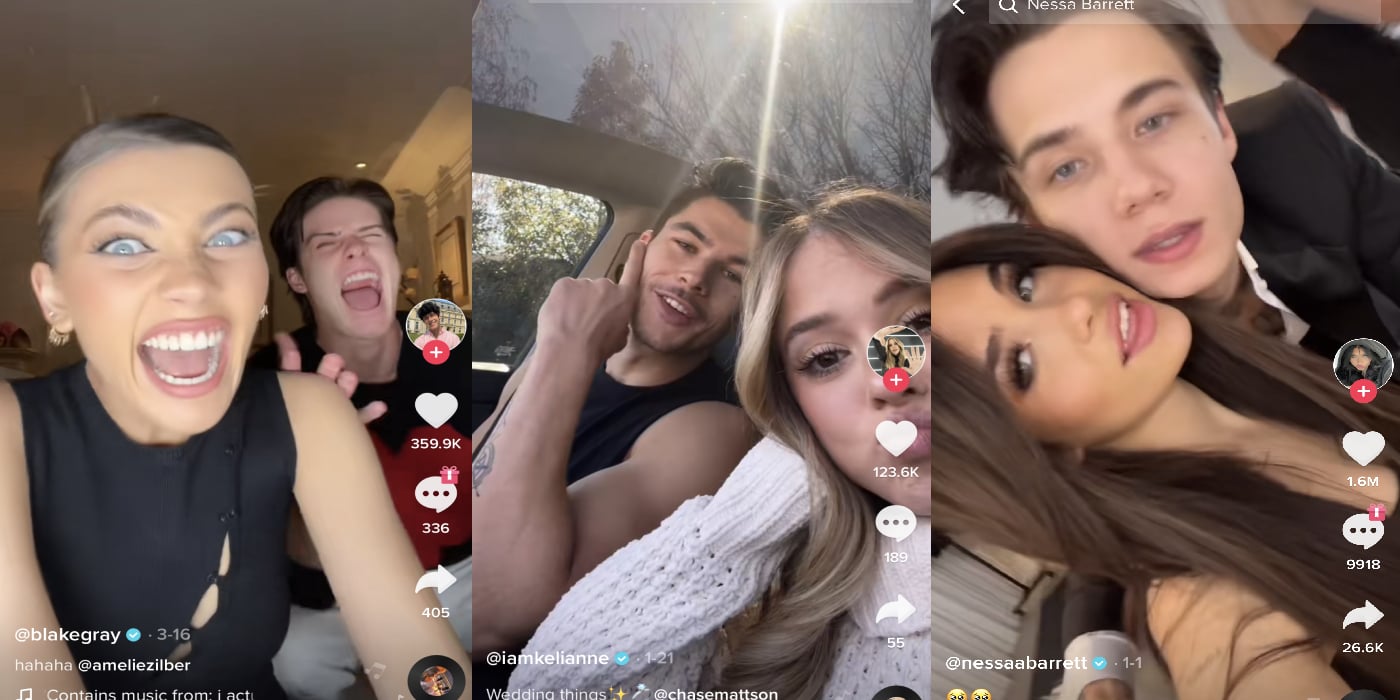 Thought it was all about Beyonce and Jay Z, did you? Kim Kardashian and Pete Davidson? Zendaya and Spider-Man? Why not join the rest of us over here in 2022, dinosaurs.

These days, if you aren’t a TikTok couple, you aren’t all that. Actor or musician relationships are now a relic among the likes of Alex Warren and Kouvr Annon, Josh Richards and Nessa Barrett, Bryce Hall and Addison Rae, Quinton Griggs and Cynthia Parker.

Not all of these love stories have happy endings, but it’s about the journey, not the destination, isn’t it? Two creators hand-in-hand, making content for their legions of fans, proving that love in the digital age can sometimes be a roaring success. Sometimes…

Here are ten TikTok couples that did and didn’t make it. 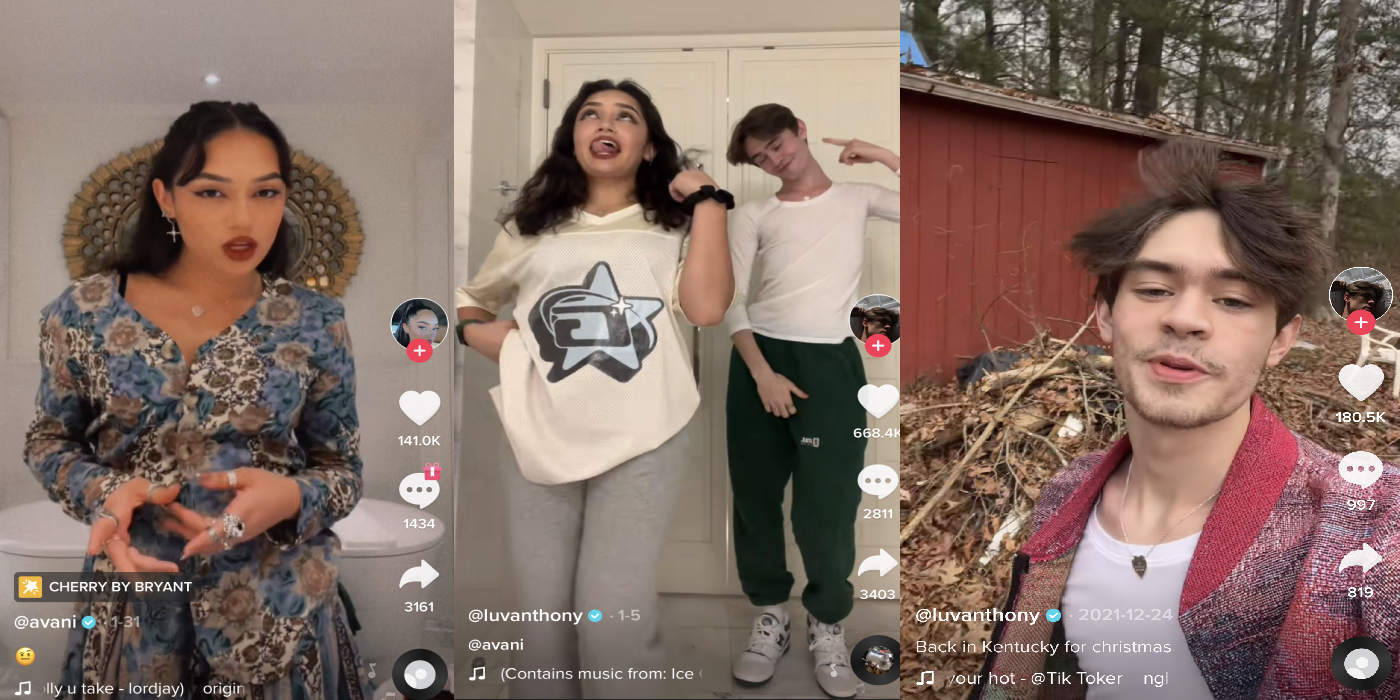 Avani Gregg and Anthony Reeves were already following each other on Instagram before things took a romantic turn. Gregg then went rogue by sliding into his DMs.

In March 2020, the pair met in person at Social Bash. Anthony said on a YouTube Q&A that he tried to introduce himself to Gregg, but said Gregg didn’t “acknowledge him, completely ignores [him], does not say a word, and just walks away.”

Ultimately, things worked out. Although both lead very public lives separately, as a couple they remain pretty private, and that’s the way Gregg likes it.

“When we started talking, we just didn’t feel the need to post,” she told Seventeen. “It’s like, ‘No, we actually like each other, guys.’ We don’t care if you care. We like each other and we’re going to deal with it our way.” The couple is still together.

According to their former friend, Dayna Marie, she introduced the pair. Dayna was already friends with Warren before moving to Hawaii where she met Annon. When Marie posted a Snapchat of Kouvr sleeping, Alex messaged her that she was the most beautiful girl he’d ever seen.

The rest is history. Marie showed Annon Warren’s message, Annon asked for his Snapchat and the two were soon inseparable, FaceTiming whenever they could. Annon allegedly had a boyfriend at the time which made for some drama.

Warren later addressed Marie’s video and the allegations during the livestream. Then he and Annon carried on doing what they do best: doing silly couples dances on TikTok. They too, are still very much an item. 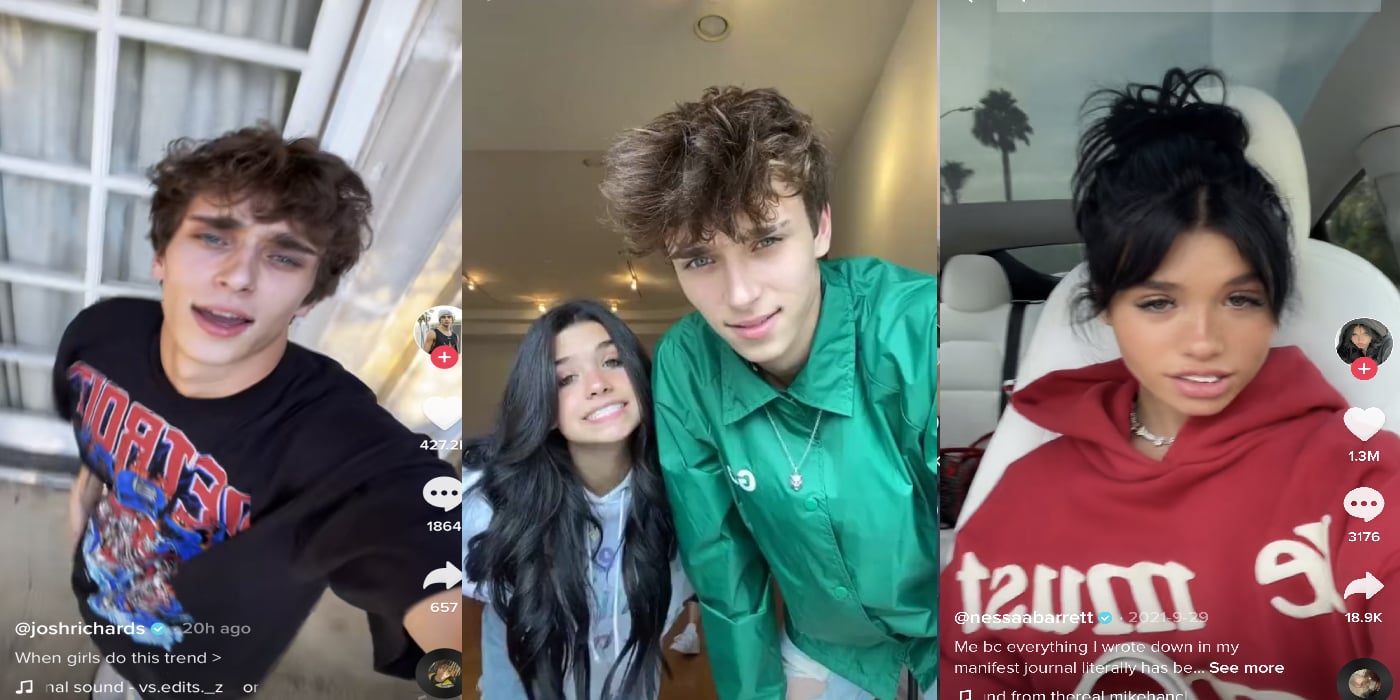 This on-again/off-again couple is one of the more tumultuous relationships on the list. Richard has an eye-watering 1.8 billion likes on TikTok and 25.6 million fans, while Barrett 406 million likes and 10.3 million fans.

In February 2020 a YouTube video revealed that Richards saw Barrett on his For You page on TikTok and decided to slide into her DMs as he “thought she was a hot TikTok girl.” Who’s cutting onions in here? You may laugh, but shooting his shot worked, and the two got together soon after.

Sadly, Richards and Barrett had a very cagey, public breakup in April 2021. And that was that. Right? Not quite.

Alas, there was a reason that breakup was so controversial and that reason is… 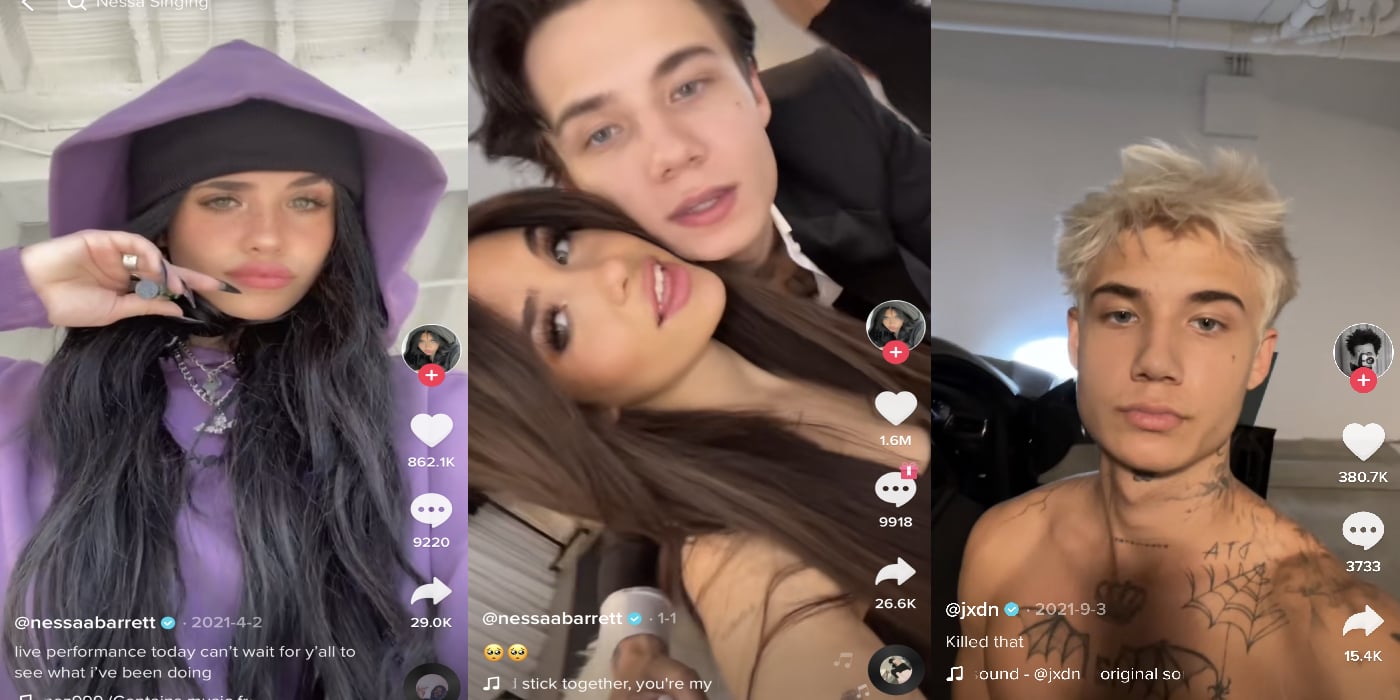 …Barrett hooked up with Richards’ former best friend Jaden Hossler! Yikes. Thought TikTok flings were all dancing and cupcakes? There’s a big deal of beef in and amongst the agreeable content.

Barrett and Hossler met when collaborating on the song “La Di Die” in February 2021. Seconds after wrapping the shoot, romance rumours began to circulate. She was dating Richards at the time while Hossler had just splitten up with Mads Lewis. Sparks clearly few, and the pair got together following her split from Richards.

The two went on to make their red carpet debut at the MTV Video Music Awards in September 2021.

In an Instagram post, Hossler defended the relationship, saying, “I’ve never found joy like I found w Nessa. She deserves the world y’all have no idea. I know this won’t do much bc people online are toxic as f**k, but since everyone was giving their opinion I thought I would too. This girl saved my life.” 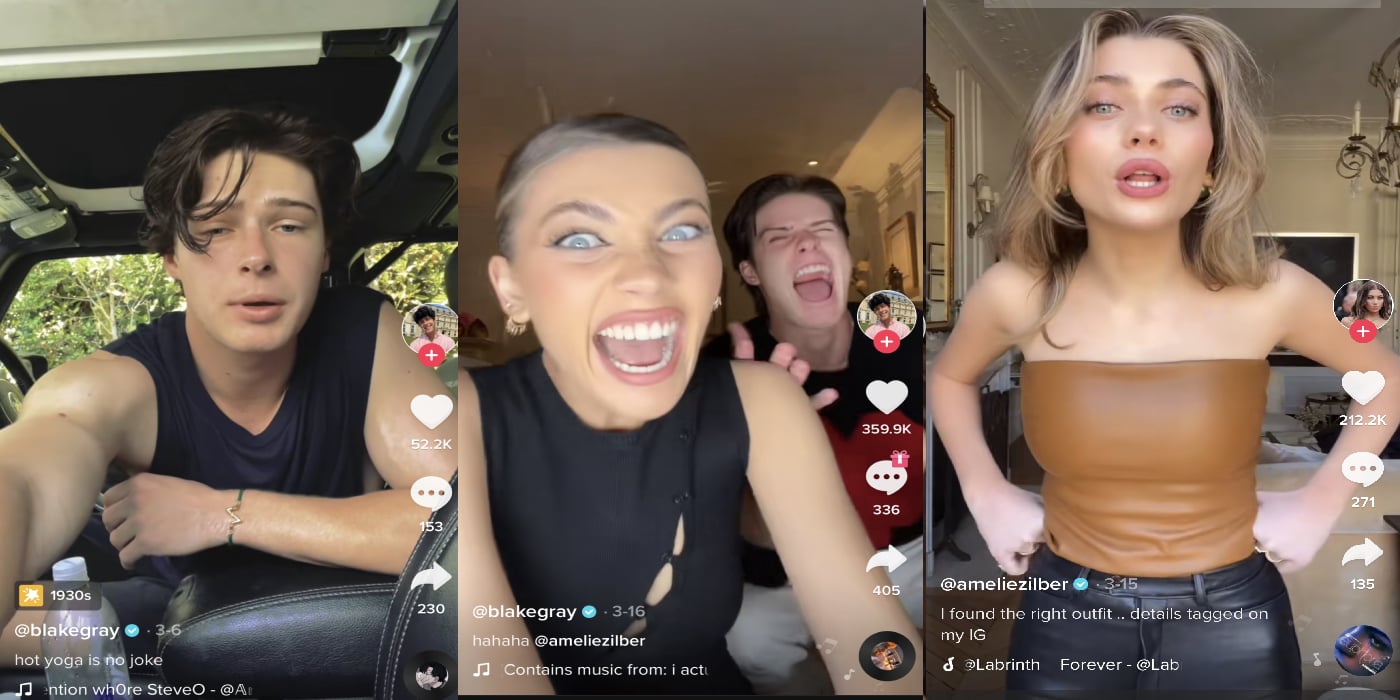 Another entry, another power couple. The combined following of this TikTok pair is 17.3 million

Blake Gray and Amelie Zilber announced their relationship via Instagram in September 2020. Since then, they’ve been sharing multiple romantic posts together and have frequently appeared in each other’s YouTube videos.

“Can’t believe it’s already been a year with you babe, time flies with you and I couldn’t be happier,” Gray wrote on Instagram in September 2021, alongside a photo of himself kissing Zilber. “I love you so much.”

Zilber is no stranger to the bright lights. Her parents are film producers Christina and Laurent Zilber. She herself models for cosmetic brand Jouer Cosmetics and is also a brand ambassador for UNICEF, thanks for her TikTok videos highlighting international problems. Gray is primarily a model and TikTok star. 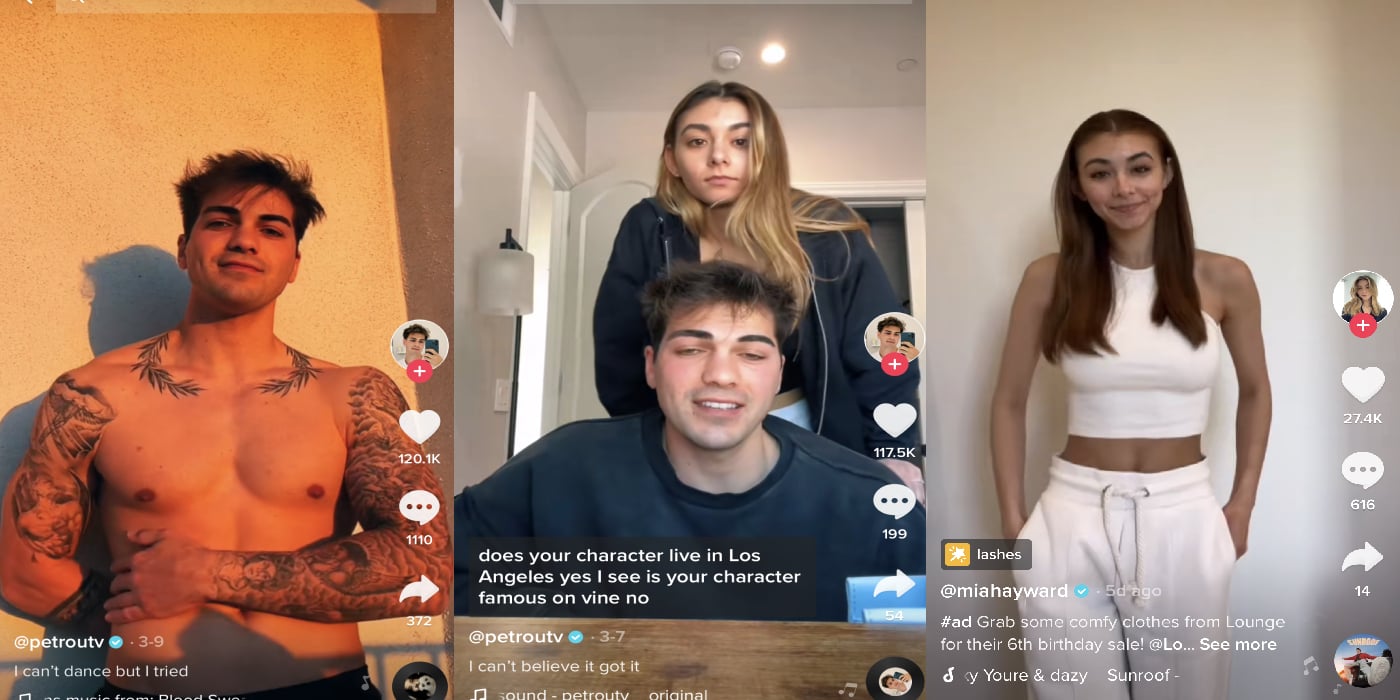 As one of the co-founders of The Hype House — an influencer group that focuses mainly on TikTok and YouTube — social media VIP Thomas Petrou has been in the spotlight for some time now. His girlfriend Mia Hayward hasn’t done so bad for herself, with 133.7 million likes on TikTok.

Petrou and Hayward went public with Hayward in April 2020 via Instagram. She later moved into the Hype House to create content with the rest of them. While they don’t post on social media together too much, the couple keeps fans updated on their relationships with the odd romantic selfie on their Instagram accounts.

“Almost 2 years later,” Hayward captioned two photos of herself and Petrou in December 2021. “Love of my life.”

As you might have noticed, 2 years in TikTokLand is an age. Good on these for keeping the candle burning. 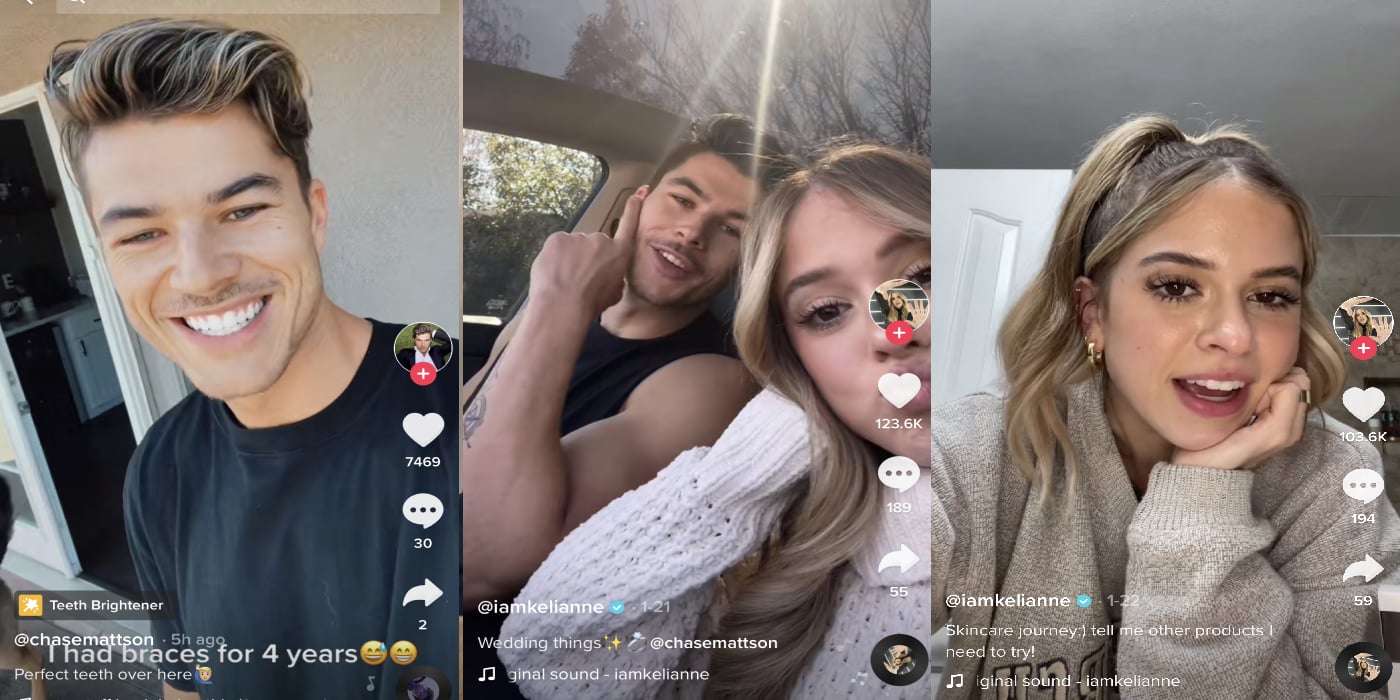 Unlike most couples on this list, and TikTok at large, Kelianne Stankus and Chase Mattson aren’t 8-years-old. They’re full-blown millennials, but their following is just as big as any Zoomer pairing.

Their relationship began when Stankus saw Mattson on Instagram’s explore page in April 2020. They chatted, FaceTimed and eventually met up. By December that year they were engaged.

“Everything with Chase just felt so different than any other past relationship,” Stankus told Brides in November 2021. “It usually takes me a while to figure out if I have feelings for someone, or if I can see something with us, but I knew immediately. We just connected so well.”

On TikTok, Stankus has 10 million followers while Mattson has 2.4 million. Though his likes amount to 107.4 million. 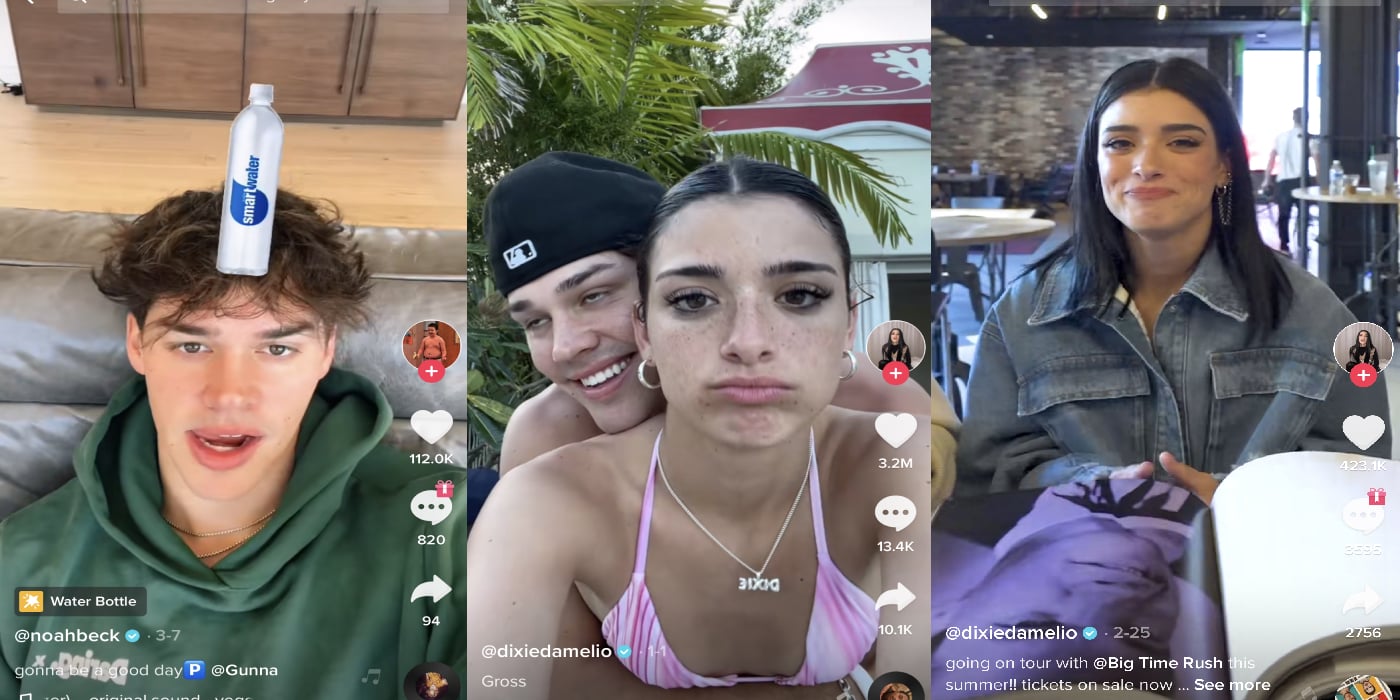 Dixie D’Amelio is a big deal on TikTok. As the younger sister of social media giant Charli D’Amelio, she’s drummed up a following of 57.2 million. It only makes sense that she would find a soul mate to land her place on a list of famous TikTok couples.

Since confirming their relationship in October 2020, Noah Beck (32.8 million followers, 2.2 billion likes) and D’Amelio have shared some of their closest moments on social media, from birthday celebrations and anniversaries to traveling the globe together.

These days, the couple has decided to step back and keep most of their life away from the limelight. While attending New York Fashion Week in February, Noah explained to E! News why he and Dixie are keeping things more private.

“I’ve been telling a lot of people we’re kind of keeping things offline,” he told the outlet. “And since we’ve been doing so, it’s been good. It’s been kind of like a weight off the shoulder in a way. We kind of just enjoy time together rather than seeming like we do it for our fans, in a sense. We’re doing it for each other and that’s what it’s all about.” 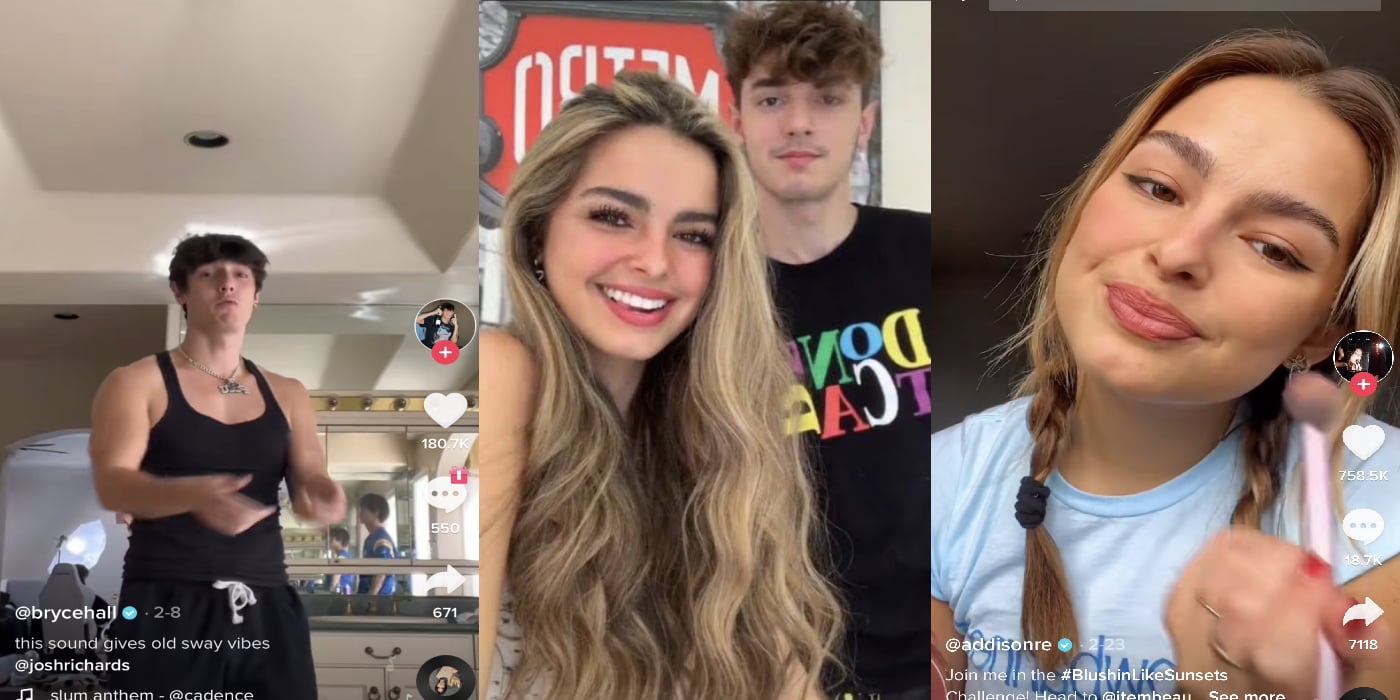 Bryce Hall and Addison Rae were affectionately labelled Braddison during their heyday. TikTok users couldn’t believe their luck that two such creators were shacking up.

Hall and Rae first met online way back in late 2019. Shortly after they began making cutesy videos together for TikTok, though denied a relationship for months. It wasn’t until October 2020 that the couple went official.

What followed was a very topsy-turvy kinship full of false breakups and gossip.

The pair eventually split in April 2021 after allegations were made that Hall cheated on Rae with an adult film star in Las Vegas. Allegations he continues to deny. 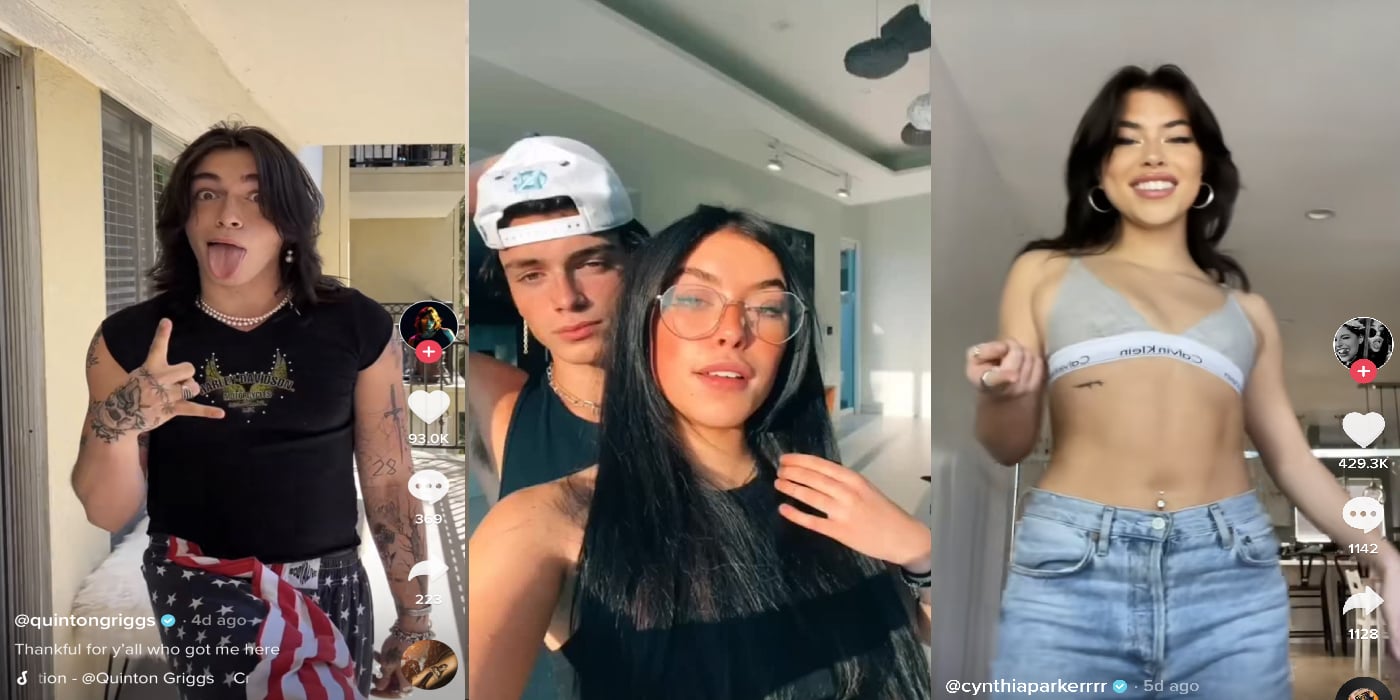 How did they meet? Griggs and Parker officially met at Social Bash 2020. Griggs asked his friend Mattia Polibio, “Damn, who is that?!” Parker first referred to Griggs as “Crutch Guy” because her first thought was, “What happened to this man’s leg?”

Okay, so playful banter, creators in common… what happened? The couple drifted apart, as if often the case with young love. There was no beef to be reported.

In March 2021, Parker tweeted that while they were no longer dating, Griggs would be her “forever best friend.”