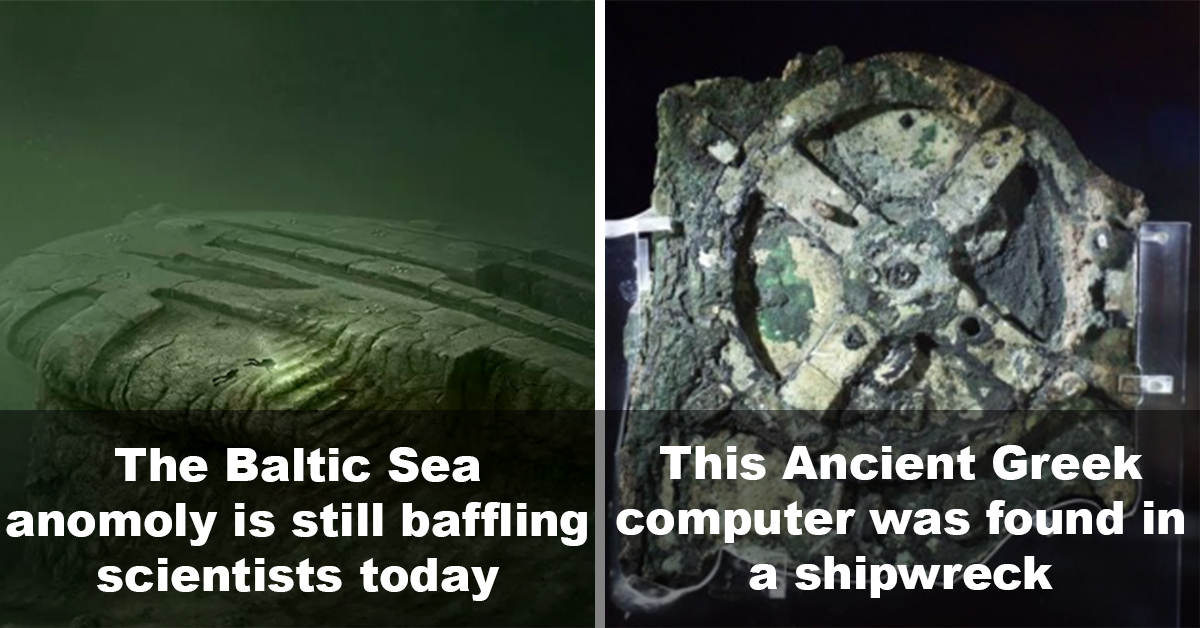 Let’s face it – the ocean is a pretty big place. In fact, it’s so big that even today there are large parts of the sea that we know very little about and have never managed to fully explore. When divers and treasure hunters do actually manage to reach the sea floor, they’ve often uncovered some bizarre discoveries, from huge stores of precious metals to what could be part of a UFO aircraft! In the list below we take a look at some of the strangest things ever to be found in the ocean. Conspiracy theorists will be particularly interested in the fossil remains of ‘sea monsters’ and history buffs will be fascinated to learn more about the remains of not one but two ancient cities found beneath the waves. Any landlubbers out there, abandon ship now! This list contains 10 of the weirdest things found in the sea to date… Forget your Macbook Pro, what about this ancient Greek computer instead? Sailors discovered the ‘Antikythera mechanism’ sometime between 1900-1901 in a shipwreck off the island of the same name. Experts now believe that it’s the earliest form of a computer known to man! The analog computer was designed to serve several purposes, including predicting the astronomical positions and eclipses of calendars. It’s still really well-preserved and is now on display at the National Archaeological Museum of Athens. During the late 60s and early 70s, multiple Apollo rockets were sent to orbit the Earth and moon. In the process, the engines that powered these rockets dropped to the ocean floor and for a long time were believed to have been lost forever. However, in 2012 Amazon CEO and founder Jeff Bezos funded a private projects to recover the rockets and they have now been discovered. After a two year renovation project the Apollo rockets are now on display at Seattle’s Museum of Flight. The remains of a lost city were discovered in the Gulf of Cambay (off the coast of India) in 2001, and some archaeologists believe that it may be the oldest city in history. Many artifacts have been recovered from the site including sculpture, human remains, art work and even wooden furniture – one piece of wood dated back at least 9500 years. The lost city is still shrouded in mystery and archaeologists are working hard to decipher which period of time the city hails from. In 1985, divers uncovered a locomotive graveyard off the coast of New Jersey, USA. It dated back to the 1850s and it’s still unclear as to why there are so many trains there. Historians believe that the trains either fell off a barge by accident or were deliberately thrown off a ship to reduce the risk of sinking during rough seas. The trains are still in very good condition and the site has now become a popular spot for wreck diving. Lake Michigan isn’t a sea, but it’s still rather large all the same! In fact, in 2007 a series of stones arranged in a circle were discovered 40 ft below the surface of the water. Researchers have no idea why they’re there, how old they are and what exactly their purpose it, but they do resemble other weird stone arrangements from prehistoric times – most notably Stonehenge. Amateur treasure hunter Jay Miscovich discovered more than 10,000 emeralds off the coast of Key West, Florida, USA in 2010! He couldn’t believe his luck when experts valued the haul at half a billion dollars, and the discovery earned him mass media attention. However, the Federal Government soon caught wind of Miscovich’s underwater find and granted him only temporary ownership or the emeralds – meaning that legally he would be unable to sell them. At the time of his discovery, Miscovich had been in millions of dollars of debt and after realising he would be unable to profit from the jewels he tragically killed himself in 2013. The true ownership of the treasure is still being settled in court. This eerie-looking rock formation is called the Baltic Sea anomaly and was discovered by Ocean X (a private treasure hunter team) in 2011. Located on the floor of the northern Baltic Sea, the bizarre rock structure resembles an alien saucer – or the Millennium Falcon, if you’re a Star Wars fan! Some theories claim that it’s the remains of a WWII anti-submarine device or even an underwater Nazi base. However, scientists believe that its mysterious appearance is simply down to nature and probably wasn’t made by men…or aliens, for that matter. 3. The Ancient City of Alexandria The Ancient City of Alexandria – ruled by Egypt’s last Pharaoh Cleopatra – is another hidden city that has remained perfectly preserved for thousands of years. Historians believes that the city disappeared underwater due to a series of natural disasters, including tidal waves and earthquakes. The ancient site was actually hidden for almost 1600 years, before being rediscovered in 1998. Egyptian authorities are planning to build underwater tunnels throughout the complex, which would make it the world’s first underwater museum! Who knows – maybe explorers will uncover the final resting place of Alexander the Great whilst they’re at it – the ancient king’s tomb has never been discovered and still remains one of the greatest mysteries in the history of civilisation. The ocean depths have uncovered some of the strangest-looking creatures that humans have ever seen – no wonder the very bottom of the sea is so dark, when things like blobfish (see above) are swimming around! The blobfish was recently voted the ugliest creature in the world and it’s not hard to see why. This deep sea creature and many others like it are usually only seen by humans diving deep into the ocean – they’re also occasionally caught in deep sea fishnets. The RMS Republic was the sister ship to the Titanic, and it ended up meeting a very similar fate to its famous sibling. The Republic was lost at sea after a collision with the RMS Florida on 24th January 1909 and sunk to the ocean floor just off the island of Nantucket, Massachusetts. It wasn’t seen again until 1981, when divers located and explored the ruins. It’s rumoured that the treasure onboard could be worth millions of dollars – the ship may have been carrying American gold coins worth $250,000, and a $3,000,000 loan to the Imperial Russian government. The History channel now hosts a series called Billion Dollar Wreck, following the adventures of Martin Bayerle and his attempts to find the buried treasure.