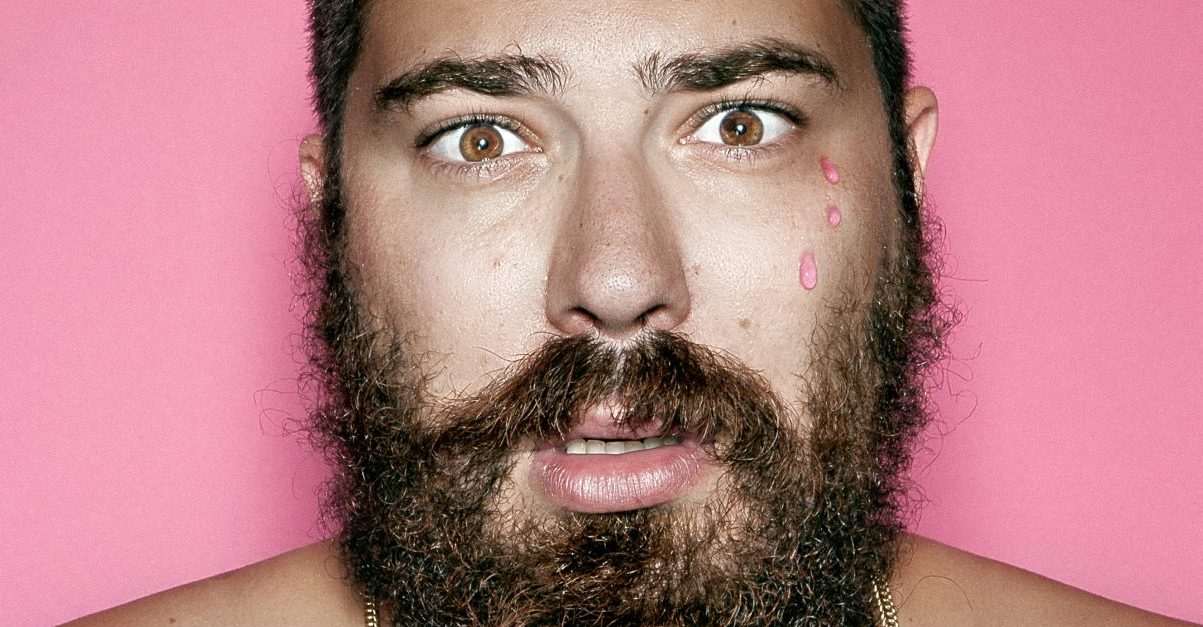 What does it mean to be a man? A question with a million different answers, none of which are likely right. Masculinity might mean chopping down trees and eating raw meat to one person, and raising awareness for mental health and eating a plant-based diet to another.

Without getting all “gender studies” on you, mankind is something that changes year-to-year. It evolves and gets new interests. The 2022 man is no different. Though, most of his interests exist on Instagram. Which raises the question: “What accounts are men following on Instagram?” Better yet, what ones should they follow?

There are many accounts that men should follow, covering a range of topics and interests like food, fitness, comedy and sport. Some of these include Joe Wicks, Mariano Di Vaio and Ryan Reynolds.

Below is a handful of people/accounts that you should at least have a look at on Instagram, to see if it tickles your fancy. Who knows, it might alter your life for the better. It might make you a new man… 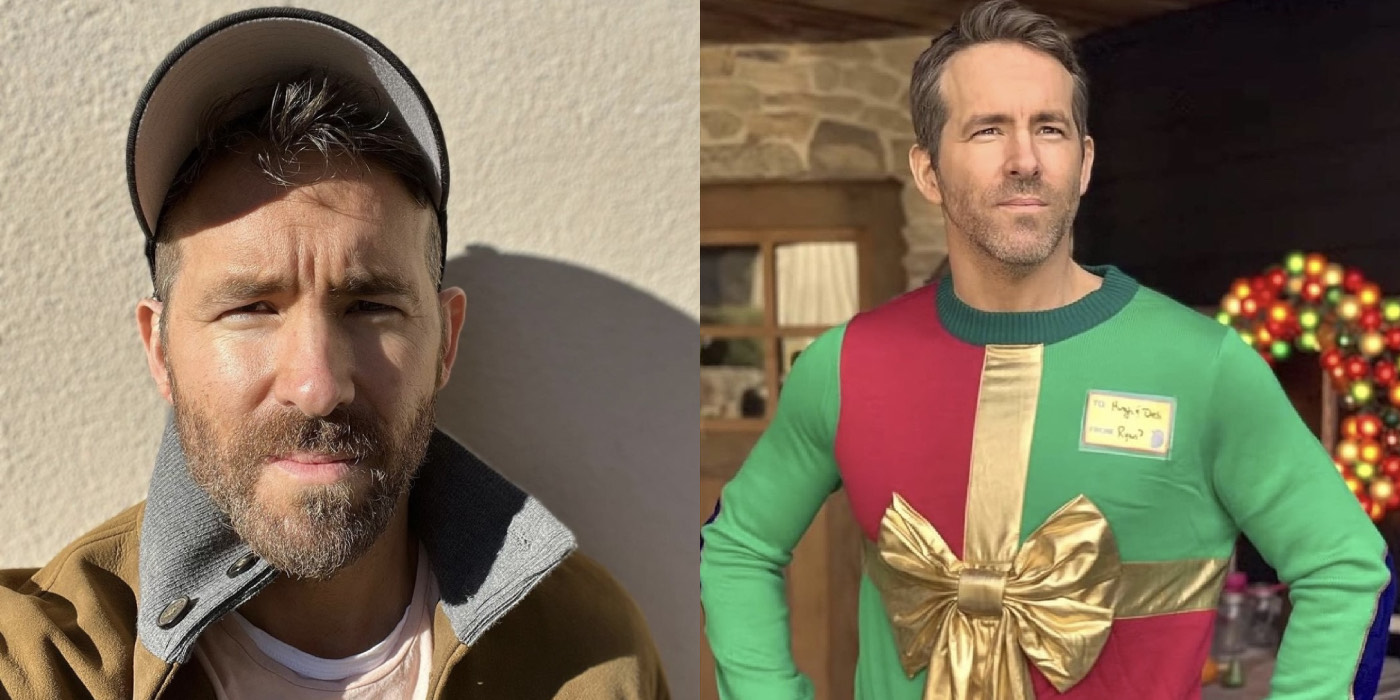 Prior to becoming a Funny Guy on Social Media™, Ryan Reynolds made his name in a string a turkeys. He played a vampire hunter in Blade: Trinity (2004) opposite Wesley Snipes and Jessica Biel and starred in the 2005 remake of The Amityville Horror. Despite the lacklustre movies, Reynolds garnered attention as a sex symbol, featuring in People Magazine’s “Sexiest People” issue in 2007, earning the title “Sexiest Renaissance Man”.

Over the last decade, he gained a huge following across all social media thanks to his faux-feuds with Hugh Jackman, and his jokes at the expense of his wife Blake Lively. Sometimes, all men want is to have a laugh and see some funny, light-hearted stuff on the gram. Reynold’s presence (which is big on all social media platforms, it should be stated) meets that criteria to a T. 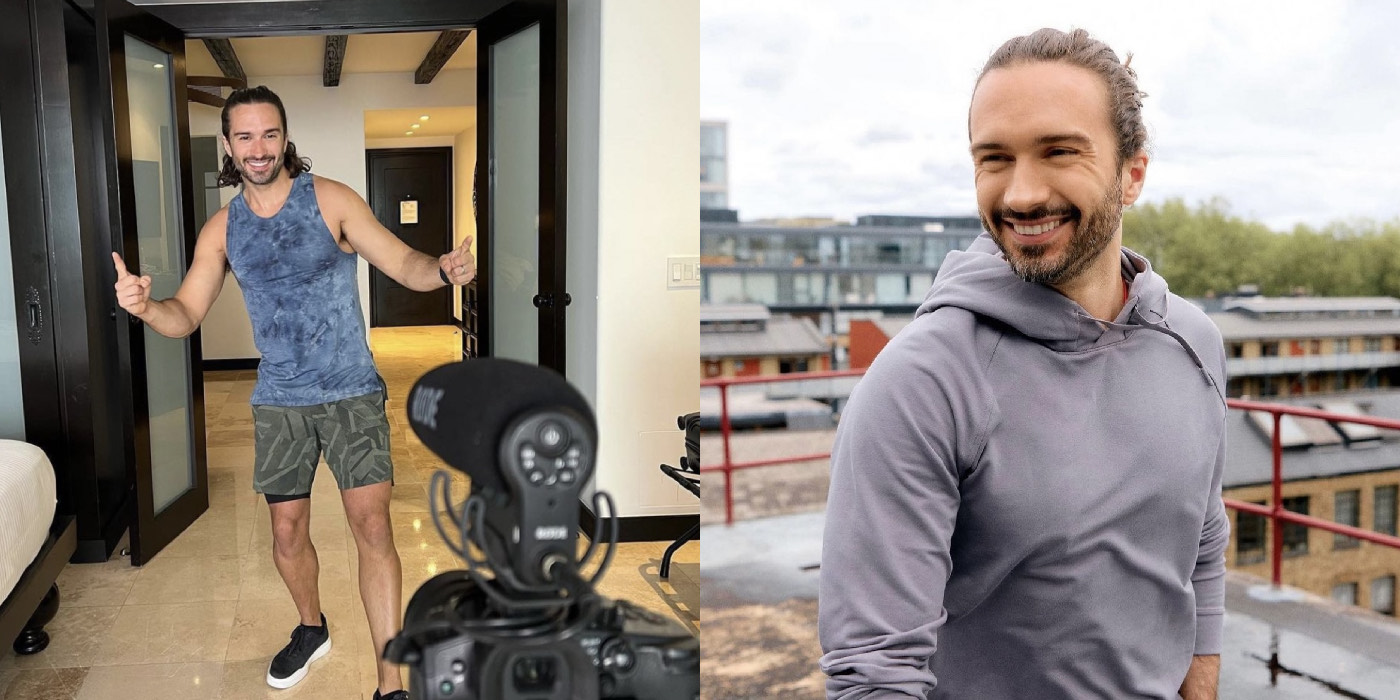 It’s hard not to think about Joe Wicks when you imagine a health and fitness influencer. During the early months of the pandemic, Wick made a killing doing his fast and simple home workouts to keep the world fit when exercise was extremely limited. Wicks began his career as a teaching assistant before becoming a personal trainer. Posting his journey on social media, he attracted millions of followers charmed by his chirpy, playful approach to something a lot of us dread to even think about it let alone do.

In 2014, he created a YouTube channel named The Body Coach TV. His first video, a 20-minute introduction to High-Intensity Interval Training (HIIT), reached over six million views. Wicks went mainstream shortly after, appearing as a guest on several UK daytime talk shows, including Good Morning Britain, This Morning, Loose Women and Lorraine. He later became the presenter of reality TV show “Joe Wicks: The Body Coach” which aired on Channel 4 in 2016. If you’re looking to get into shape without a drill sergeant screaming in your ear, give Joe a follow. 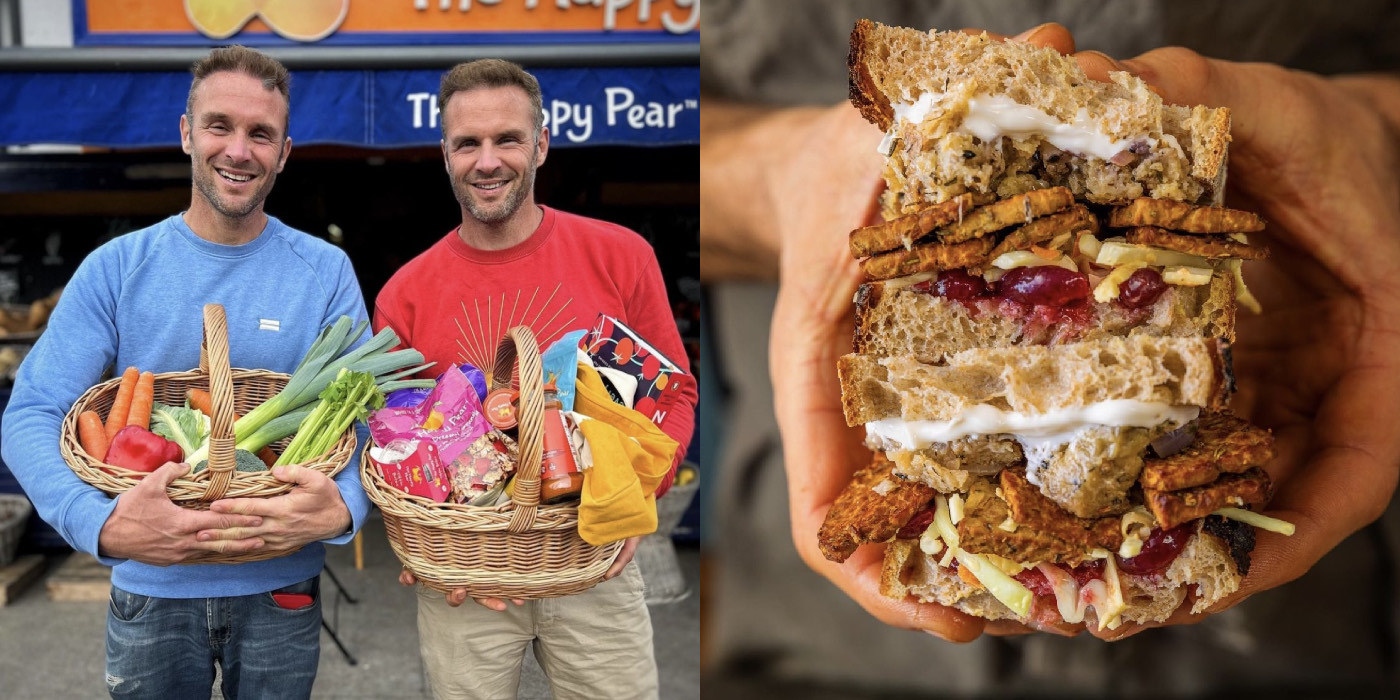 Although the vegetarian and vegan industry is mainstream these days, with some high street restaurants exclusively devoted to meat-free menus, it remains a punchline among a lot of men. As a remedy, we’re going to include two Irish vegan vloggers and cooks because, as it stands, women are twice as likely to be vegetarian/vegan than men. And we’re not saying you should eat exclusively vegetarian/vegan meals, but considering it every other day would be a good thing for the planet, regardless of our personal preferences.

The Happy Pear’s goal, in their words, “is to create a community built around health and happiness, in an environment people find enjoyable and where they feel supported in their efforts to make change.” While predominately YouTube-focused, these lads also have a special following on Instagram (491k followers) where they demonstrate how to make quick, easy and TASTY meat-free meals. We know that’s a cliché, but it really is true with them. The ingredients are basic and accessible to any person. The results are excellent. What’s not to like? 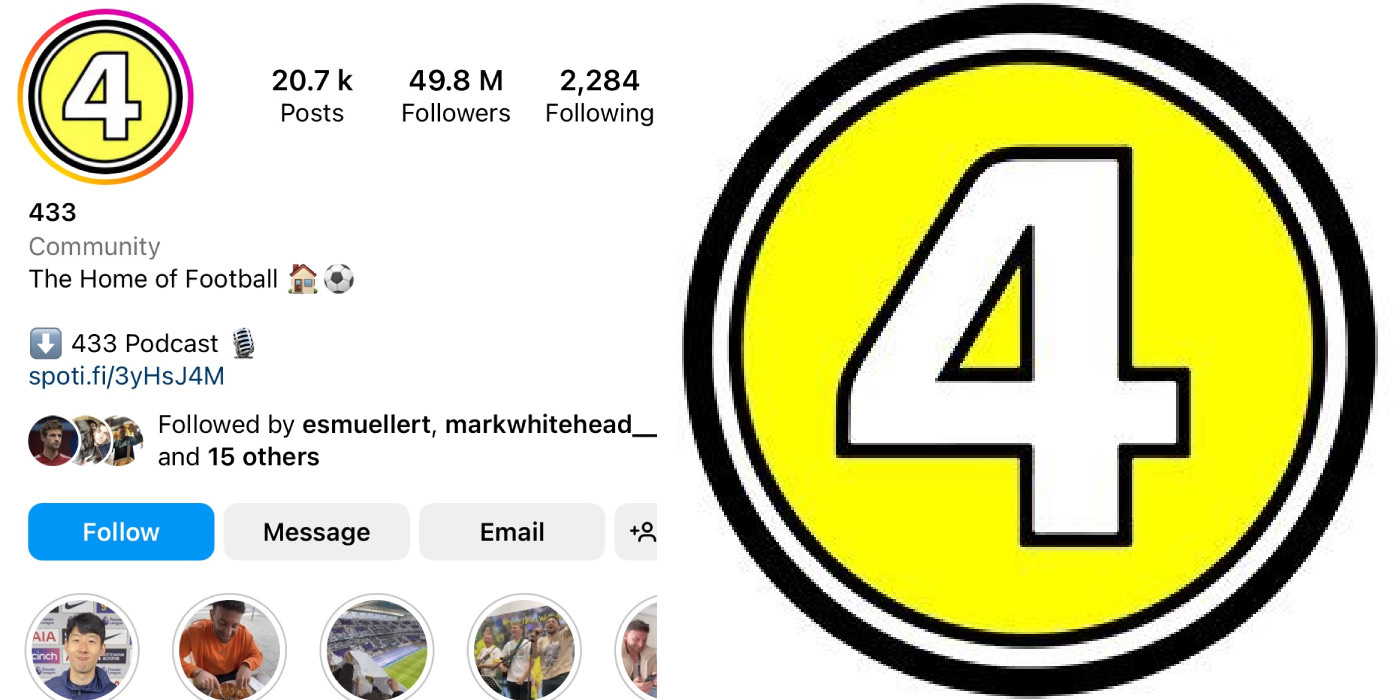 We could list several sports Instagram pages here but for the sake of this list not breaking 80 entries, we’re gonna whittle it down to 433, as football remains the most popular sport across the world. It also has 49.8 million followers. A big, big amount. Labelling itself as “the embodiment of football culture”, 433 is one of the largest social sports communities in the world, bringing you everything you want to know in footballing news, as well as the funniest clips and jaw-dropping background stories. 433, in their humble opinion, is not your average sports news site. What distinguishes it is a “high dose of humour and tongue-in-cheek style”.

“By positioning ourselves inside the locker room, we’ve become part of the team and equal to the players,” 433 writes on their stie. “This gives us access to the best moments football has to offer, moments that - before 433 - have never been available to the fans. Mixing Ronaldo’s agility with Messi’s creativity and Lewandowski’s precision. That’s what our content creators are: skilled professionals who know how to impact the game. All content created by 433 Studios is made for social media and designed to engage.”

Josh Ostrovsky – known as The Fat Jewish, among many other puns – is one of the biggest social media personalities, in both reach and size. That’s why he’s a unique influence and somebody men would be foolish not to follow. Sure, Ostrovsky has gotten into a bit of bother over the years thanks to meme theft and what have you, but the whole image must be considered, and his is refreshing in the age of the gym rat. Ostrovsky hasn’t so much embraced his curves as turned them into money-making machines. Born and raised in New York City’s Upper West Side before studying journalism at SUNY Albany, Ostrovsky entered the entertainment industry as a correspondent on the E! channel. But it was on Instagram where he made a true name for himself by posting content and memes about being fat and naked, essentially.

Today, he has 10.1 million followers, which makes perfect sense for a man who once claimed: “I love the Internet more than I love any member of my actual biological family.” In 2015, Ostrovsky released his first book, “Money Pizza Respect,” and hosted a podcast with the same name for Apple Music’s Beats 1 radio station. He teamed up with another influencer the same year, Twitter’s David Oliver Cohen of @WhiteGrlProblem fame, to release his own wine, White Girl Rosé. On the side, he’s also a plus-sized model with One Management Agency, and in 2016, appeared in Zoolander 2. 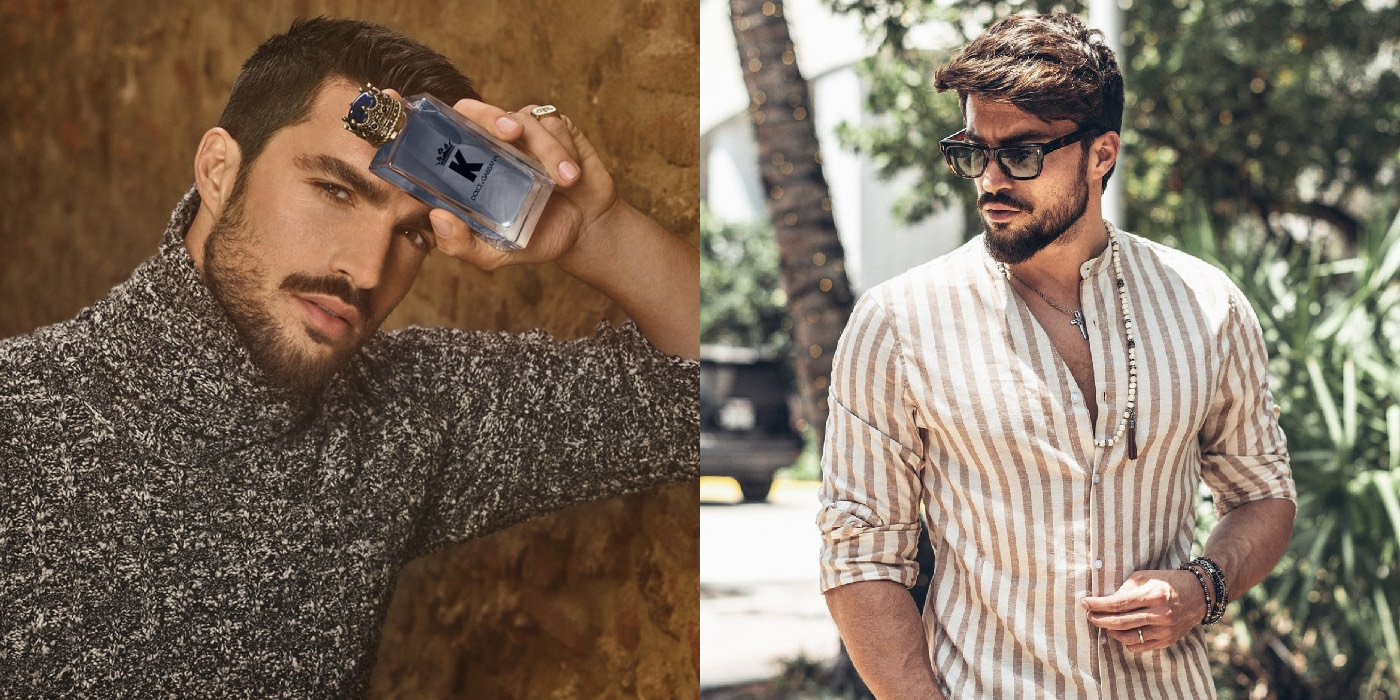 Let’s imagine you’re not on the heavier side. Maybe you don’t eat whatever you like. Maybe you’re an old school guy who thinks men should be preen and proper, their best selves, Golden Gods among civilians. That’s fine. It takes all sorts to make up the world. Some men wanna be The Fat Jewish, others wanna be Mariano Di Vaio.

Mariano Di Vaio is a professionally handsome man from Italy who has made a bit of a splash as an Instagram personality. Don’t worry, he does all the sultry runway and advert stuff, but he also offers advice on grooming and fashion for everyday men like yourselves. With 6.7 million followers to his name, Di Vaio is one of the big hitters in the male self-care game. A veritable man’s man without all the red flags and unbridled, psychologically-troubling, aggression. 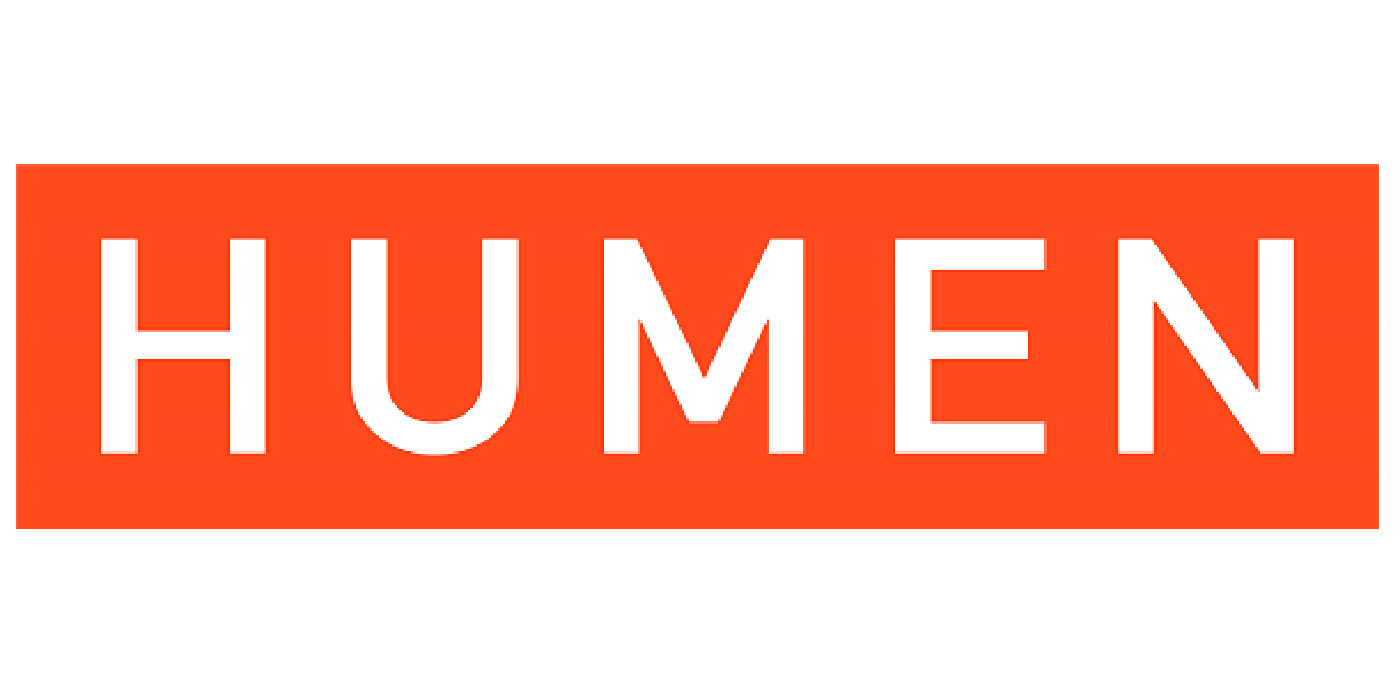 75% of all UK suicides are male. In the wake of these brutal statistics many movements relating to the improvement of male mental health have arose. HUMEN is one of them. A movement to improve and maintain men’s mental health through campaigning providing anonymous, preventative and “non-clinical spaces” for men to talk, listen and connect on a regularly. On Instagram, they have over 37k followers. It was founded by River Hawkins whose own story of struggle is heavily layered. Growing up, Hawkins said anger was the only answer to his problems. During one fit of rage, he destroyed his entire surroundings with a hammer, the only tool available to him. He found himself in a mental state where he simultaneously didn’t want to live or die.

“I tried everything to shake the emptiness,” he said. “I found destructive ways to cope because I didn’t know any other way. Most days felt like an exercise in survival. I took the anger out on myself, and did a pretty good job of beating myself up but also did a great job of pretending life was fine. After resisting for so long when I eventually asked for help I was told I could only continue to receive it if I was suicidal. We shouldn’t be waiting for people to reach breaking point before something is done. In a weird way it gave me a determination to get better and create what I wished was available. That’s when the idea for HUMEN came.”