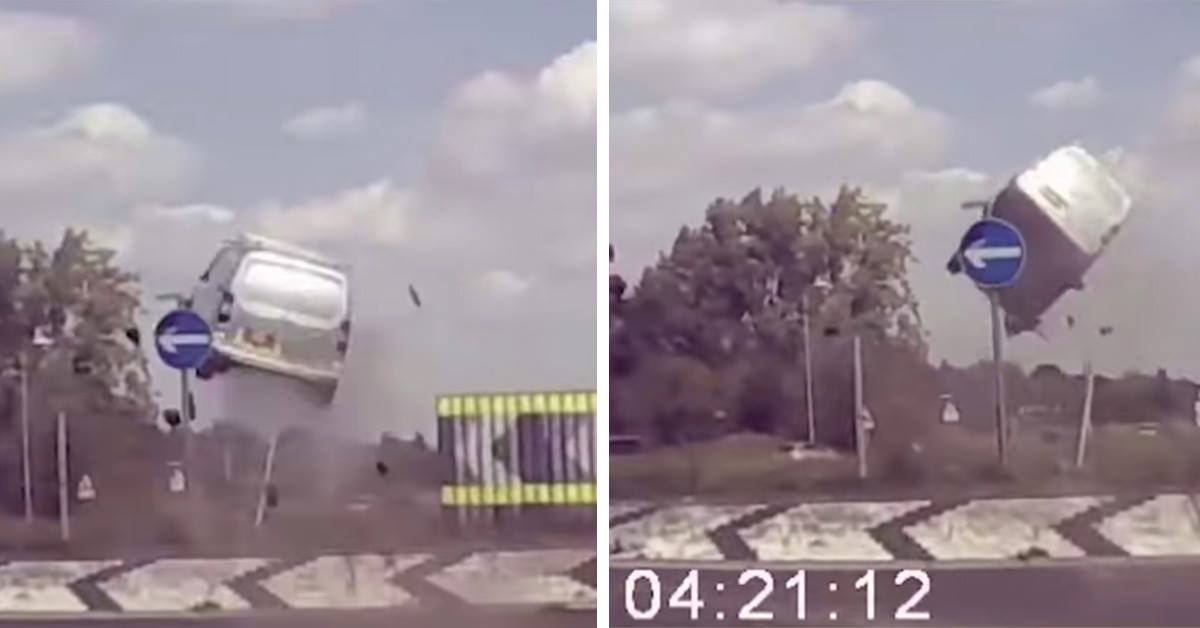 Footage has emerged of a Citroen van speeding past another car on a dual carriageway before crashing straight into and over a roundabout in Norfolk, UK.

The silver vehicle appears to be moving at well-above the speed limit and fails to turn nor stop whilst approaching the oncoming obstacle, becoming airborne as a result! Emergency service workers were rushed to the scene only to find that un-freakin’-believably, despite the fact he had to be forcefully freed from the vehicle due to the damage trapping him, the man (who was alone) escaped with his life. What’s more is he collected just a few bumps and scratches as collateral.

The same couldn’t be said for the van though, which as you can probably imagine, wasn’t in the best shape after it came into contact with the tarmac having been launched an incredible 12 feet into the air. The footage itself was captured on Andy Dayne’s (a 35-year-old motorcyclist) helmet cam, and since the video doesn’t carry on after the crash, I can assure you that he along with a number of other drivers stopped to make sure the man was ok!

The incident happened earlier on in the year (2018), and having been alerted to the video, police are now searching to see if they possess any records of the crash.

Andy, originally from Hingham in Norwich had this to say about the shocking accident:

“I was actually on my motorbike behind him so I saw it all. I pulled over along with some other drivers to see if he was OK.”

“He had to be cut out of the van – but he seemed to be alright, he wasn’t badly injured. It is quite a bad roundabout, he just didn’t see what was coming because he was going so fast.”

“He was on his own, he had a few cuts and bruises but the ambulance came straight away and took him to hospital. He just didn’t see the roundabout coming.”

“Norfolk police are now working to establish whether they have records of the accident, which reportedly happened in January.”

“Those who have seen the footage cannot believe their eyes; amazed and scared at how such a large van could get so high up in the air.”

This particular roundabout in England has built up a notorious reputation over recent years following a number of separate incidents.

The video, which was only uploaded a few days ago, has become a bit of viral sensation with most people reacting either in shock or admiration when first witnessing the height the van achieved when ascending to the skies. Many people have taken to social media sites such as Twitter to make comparisons between the clip and similar scenes from The Dukes of Hazard film. All jokes aside… It goes to show that speed limits are there for a reason. If they weren’t, things like this are very likely to happen more frequently and the chances are, there’d be a few people not so lucky as to walk away with only minor injuries. This footage of a car clearing 14 feet over a roundabout near Peterborough in the UK serves as another example as to how quickly things can go wrong. So, stay safe on the roads!

What do you make of the footage Acidheads?

You can view the full video of the crash here:

This is how NOT to approach a roundabout??

This is how NOT to approach a roundabout??