Watch Bob Ross As He Paints Only In Grey For A Colorblind Fan. It was incredible.

Watch Bob Ross As He Paints Only In Grey For A Colorblind Fan. It was incredible. 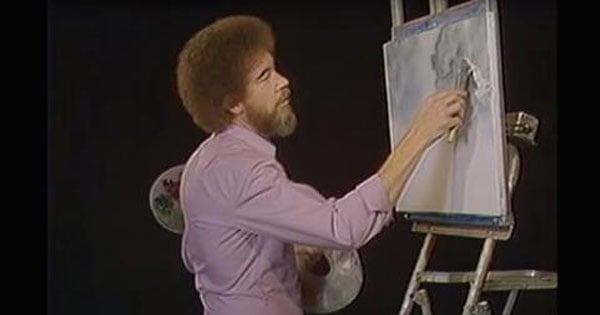 Hearing the sound of water as it runs down the humble creek. The aroma of fresh brewed coffee in the morning.

Watching the snow fall outside while resting a thick comfy blanket across your lap.

All of these sound extremely soothing. But they will not even come close to watching Bob Ross paint.

If you have never experienced Bob Ross, he’s a “soft-spoken guy painting happy clouds, mountains, and trees in about 26 television minutes,” as his website explains. If you think that this would put you to sleep you are mistaken. It’s best described as a magical half-hour of pure euphoria. ‘Nuff said!

Bob Ross passed away in 1995, but that doesn’t stop us from still watching his show, The Joy of Painting,” on TV when you can catch it. You can find some of his shows on YouTube as well if you are interested at this point. According to his website, it’s the “most recognized, most watched TV art show in history.” And we won’t argue with that at all.

Since Bob passed away it has been a long 2 decades and one of his shows recently surfaced. It was from the second season of his series and it made its way to the front page of Reddit on September 1st this year. You have to check this out.

Ross explains that this episode won’t be a normal one.

“Just recently I was doing a demonstration in a mall, and I had a man come to me and he said, ‘Bob, I could never paint because I’m colorblind. All I can see is gray tones.’ So I thought today we’d do a picture in gray just to show you that anyone can paint.”

Ross never made anyone feel bad about their “lack” of talent and always encouraged people to explore their creativity. Even I for a while thought I could paint a masterpiece!

There was a colorblind fan of his and Ross wanted to do something quite special for them. Ross saying, “Any color will work, as long as you use the basic method.”

So in this episode Ross paints his entire painting in grays and paints masterfully the rocky mountains.

“Isn’t that fantastic? That you can make whole mountains in minutes? And you can do it. There’s no big secret to it. All you need is a dream in your heart.”

Watch this as he literally makes magic on this canvas: