Why do people dance on TikTok?  –  How it started 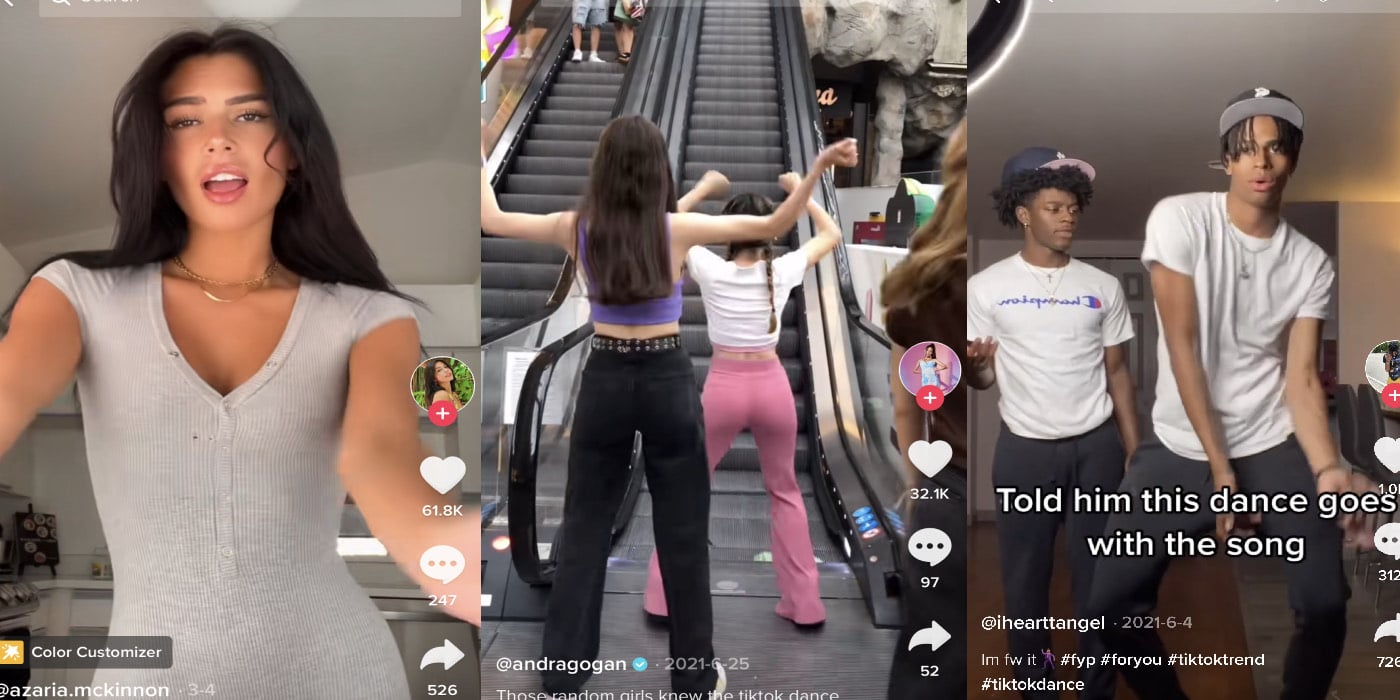 Around 1 billion people across the world are TikTok users. In 2021, the app generated an estimated $4.6 billion revenue, a 142% increase year-on-year. In Q4 2021, it had 1.2 billion monthly active users and is expected to reach 1.5 billion by the end of the year. In any given internet minute, 167 million TikTok videos are watched.

These figures are indicative of a true revolution never seen by its predecessors or imitators. TikTok managed to supersede our already-high expectations of how well a social media space should perform, with users spending more than 850 minutes per month on the app. And they did it all through dancing.

Think about other apps: Facebook, Twitter, Snapchat. Are any of them linked with a topic or trend as hard as TikTok is with dancing? It’s not as if it never existed in video-form on the internet prior. So what makes TikTok so special? How did it manage to take the reigns of viral dances and then some?

It might be down to the fact TikTok doesn’t market itself as much of a traditional social network as much it does a creative area where playfulness and performance can roam free. Unlike a lot of social media, which seem hellbent on sowing hate and division, TikTok encourages users to collaborate and let their hair down.

How did dancing on TikTok start? 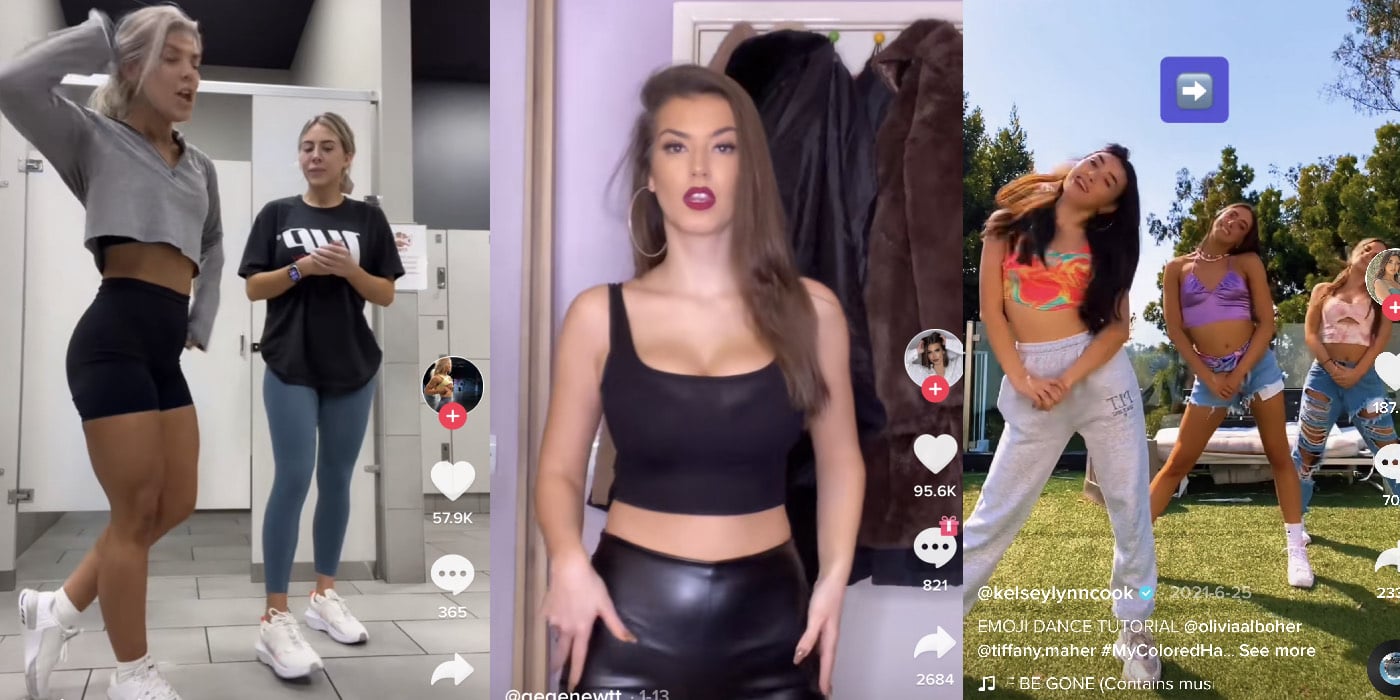 Though the precise origin of TikTok dances, and what separates a “TikTok Dance” from “someone dancing on TikTok”, is always going to be disputed, you could argue the whole thing began thanks to Lil Nas X. In 2018, he released country-rap sensation Old Town Road. At the time, not many cared for it. But when it was used for a viral dance routine, it became the song of the decade, going on to sell 10 million copies and spending a record-breaking 19 weeks at number one on the Billboard charts.

TikTok now oils the wheels of pop culture: it’s the go-to place for anything new, anything trending. In 2020, the wildly successful video game Fortnite ran a competition to create a new dance routine for player avatars. Over in Vietnam, dancing was used as a tool to encourage proper hygiene during the height of the pandemic by showing users how to wash their hands while bopping to the Ministry of Health’s pop song regarding COVID precautions.

Having your song go viral on TikTok is the modern equivalent of having it played on the radio. Doja Cat’s Say So was helped to no end by TikTok user @yodelinghayley dancing to it. Doja Cat subsequently released the song as a single complete with a video clip including the dance and its creator.

So if you’re a budding pop star, rock star, jazz pianist, whatever: get your music into the hands of a nimble and sprightly TikToker, and they’ll do the heavy lifting. They get engagement, you get exposure. If only diplomatic relations were this easy.

Is TikTok dancing good for you? 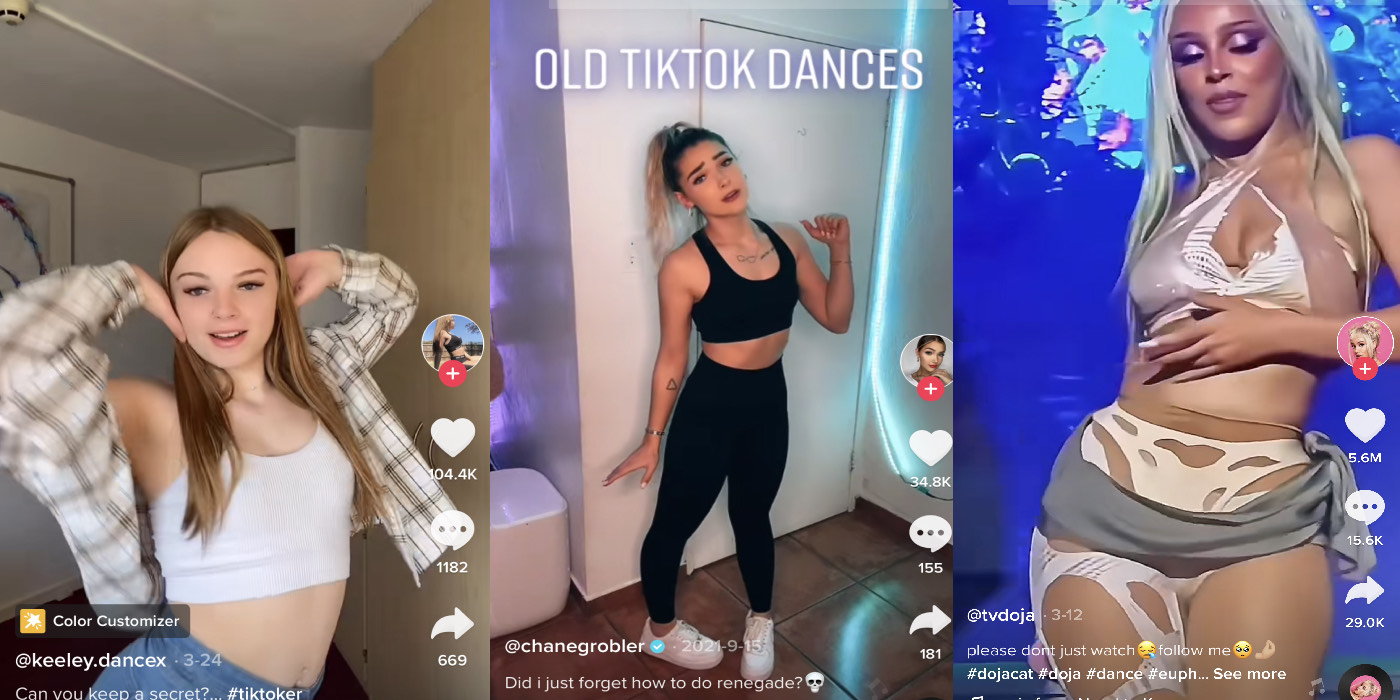 Dancing has always been a great and enjoyable way to stay fit no matter your age, shape or size. The physical and mental benefits are plain to see. Dancing improves the condition of you hear and lungs, it increases muscular strength and motor fitness, it increases aerobic fitness. It improves muscle tone, weight management and psychological wellbeing. Dancing can even help you out with self-esteem, spatial awareness and social skills.

But how about dancing as imitation? The kind you see on TikTok? Scientists believe that when we watch another person perform an action - be it acrobatics, yoga or dancing - mirror neurons spread throughout our motor cortex. Essentially, we feel inspired.

Researchers have found that strangers who subconsciously mirror other people’s body posture and movement experience a “likability boost”. They will remember more about each other and trust each other better as a result.

Synchronised movement can create overwhelming feelings of unity. Think the New Zealand haka, marching bands and line dancing. While people on TikTok are kept apart physically through phones, they create a sense of solidarity and positive feeling by moving in tandem. It taps into who we are as humans and our history of connection. Remember that the next time you hear a snide remark made about TikTok dancing.

Are TikTok dances all the same? 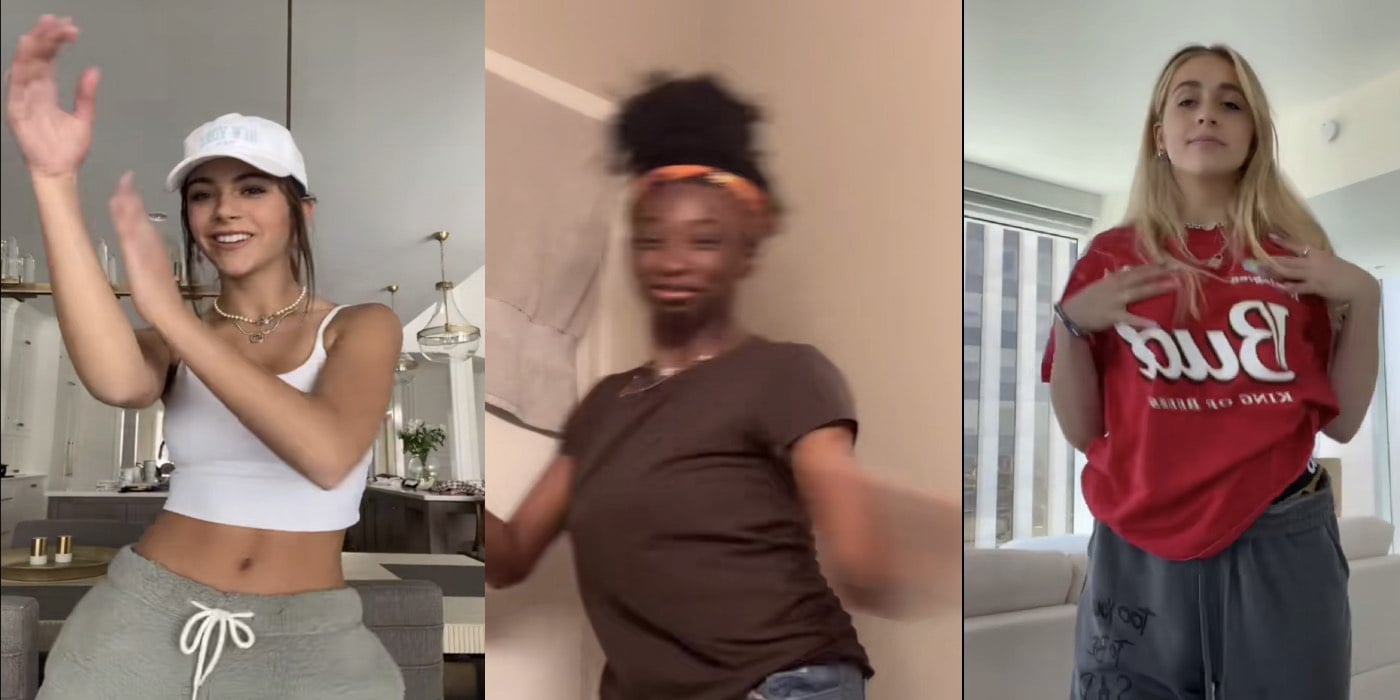 Sure, TikTok dances are popular on the app, but from a dancer’s standpoint are they anything to write home about? Are people doing them in clubs they same way people did the robot or moonwalk?

You may have noticed how TikTok dances tend to be confined to upper body movement. Now, that upper body may be doing some overcompensating. Gun fingers, hip shakes, Macarena-esque degrees of hand movements. It doesn’t hide the fact people aren’t doing all that much with their legs. There’s a simple reason for this.

Thanks to the frame of the video, creators have to limit their movement in order to stay in shot. This means less frantic movement and more tight, mobilised dancing. The “Renegade”, one of the app’s biggest dancing viral hits, is a prime example of this, with mostly upper body action.

With the nature of TikTok, the quality of dancing isn’t too important. It’s the quality of the TikTok. What is the person wearing; what do the surroundings look like; what’s their personality like? Are you warming to this person? This is the stuff that engages people and encourages emulation. Being great is besides the point. Are you having fun?

Is TikTok moving away from dancing? 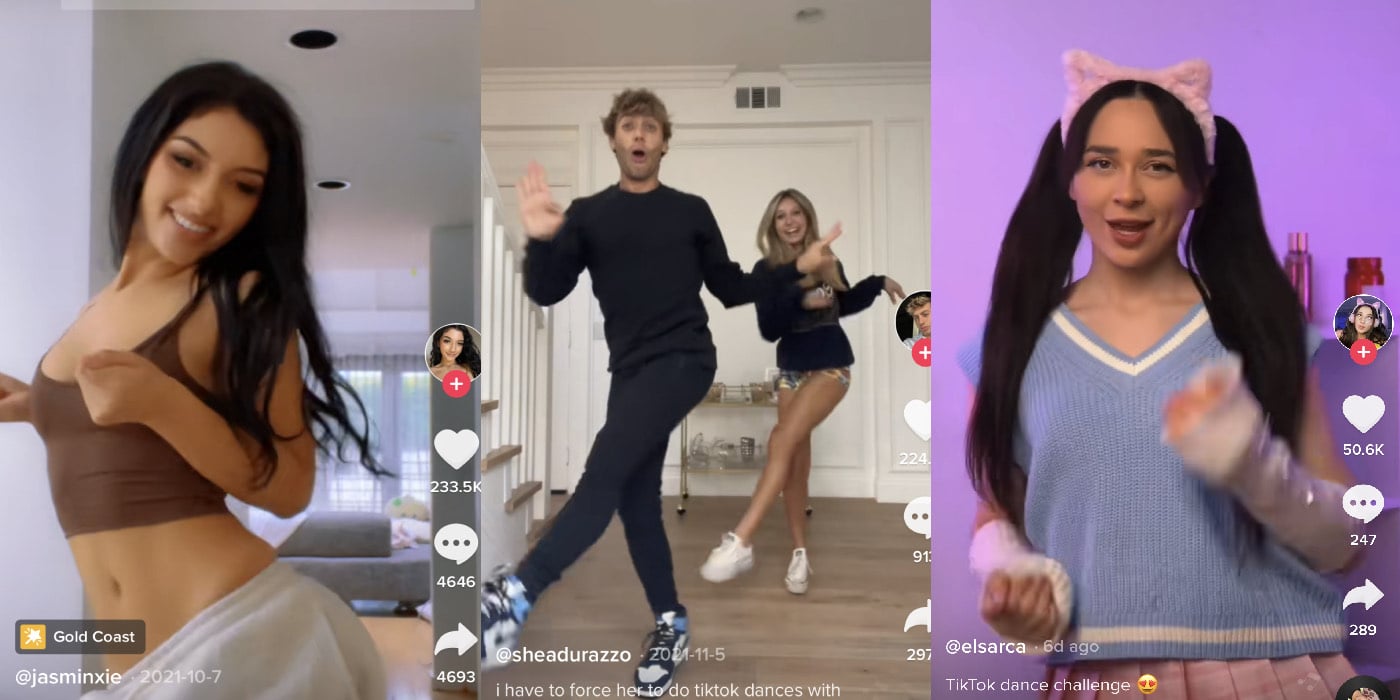 All crazes end, whether it be Von Dutch caps, low-rise jeans, Angry Birds, MSN Messenger, fidget spinners, politically-charged Silly Bandz or Pokémon Go. Interests dip; people move on. But is TikTok willing to move on from dancing? Something so fundamental to human nature? Some fear it already has.

What you have to realise is that viral dance challenges were timed to perfection. They only really came of age during a time where the public were hibernating for weeks, often months on end, and dancing proved the only proper exercise they could get when gyms and parks were closed off.

Thanks to a strike from black creators on the app (more on that in a second) dance trends on TikTok began to decline. Many of the trends associated with top audios have not included dances. For instance, the trend most popularly associated with Megan Thee Stallion’s Thot Shit is not dance-related.

After the loosening of lockdown measures, creators such as Charli D’Amelio and Michael Le have moved away from dancing to focus more on traditional vlogger-style content. Swathes of people have embraced the outdoors again and all it offers. They no longer feel the need to limit their creative output to staircase shuffles when there’s a range of options beyond the front door. 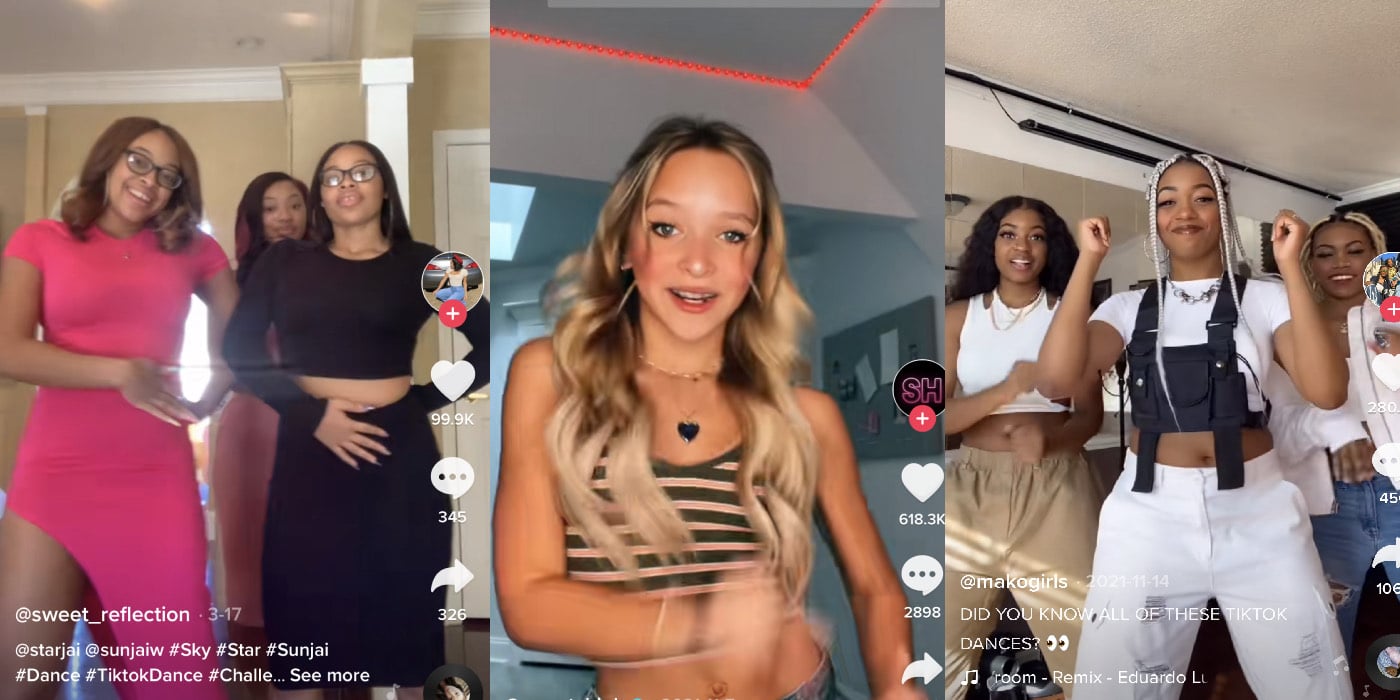 As briefly mentioned above, TikTok dances have come under scrutiny from the platform’s black community. In one video from June 2021, creator Erick Louis vibes along to Megan Thee Stallion’s Thot Shit with the caption: “If y’all do the dance pls tag me. It’s my first dance on TikTok and I don’t need nobody stealing/not crediting.” Moments later, Louis flips the bird at the camera and walks off. “SIKE. THIS APP WOULD BE NOTHIN WITHOUT BLK PEOPLE,” the caption reads.

Some have suggested that TikTok depends on Black creators, specifically for dance videos. This has led to some TikTok users ‘striking’ and not creating choreography on TikTok – all to show how viral dances created by Black people have been monetised by white music industry elites.

“Black people carry the app,” Louis said. “Similar to the ways off the app Black folks have always had to galvanize and riot and protest to get their voices heard, that same dynamic is displayed on TikTok. We’re being forced to collectively protest.”

A spokesperson from TikTok said in a statement: “We care deeply about the experience of Black creators on our platform and we continue to work every day to create a supportive environment for our community while also instilling a culture where honouring and crediting creators for their creative contributions is the norm.”

What are some recent TikTok dances? 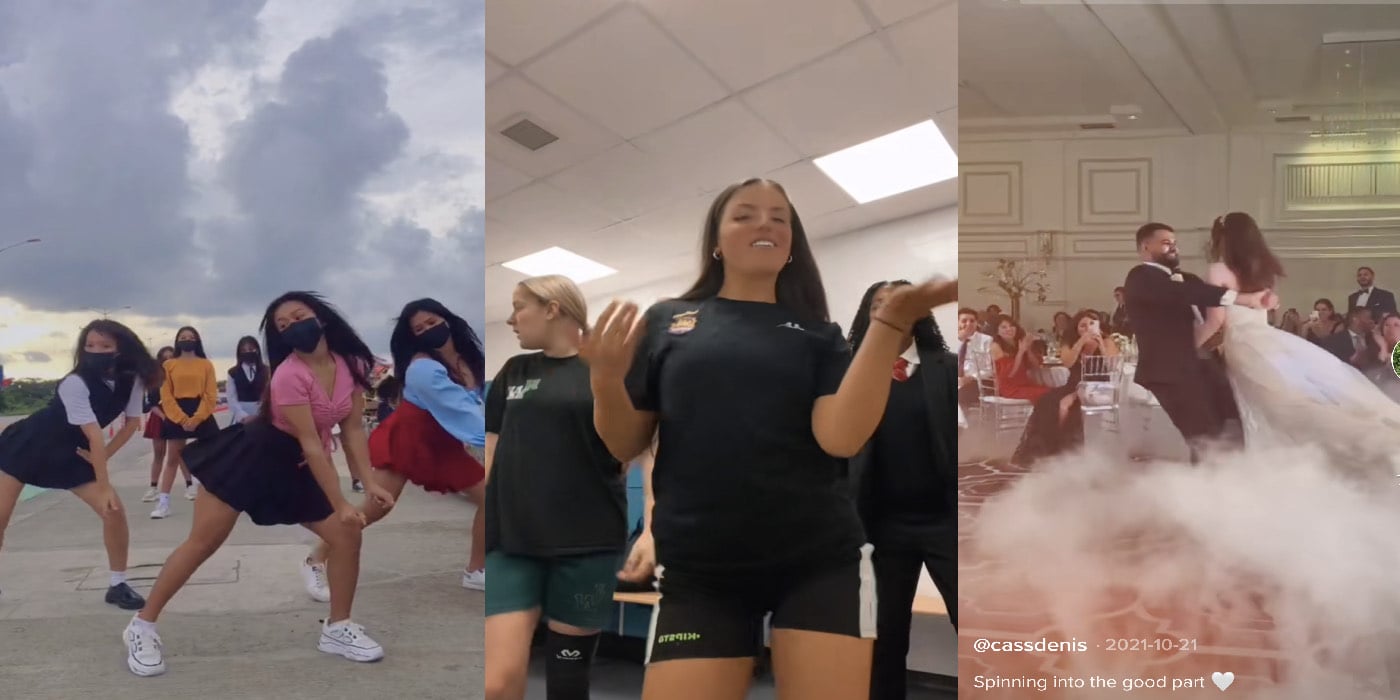 Want us to list every single TikTok dance? Are you insane? Do you think we have the ability to stop time and space? Sadly, you’ll have to spend the next decade trawling through TikTok to find every single dance routine on there. What we can do is offer you a starter – a taster of what to expect.

Recently, the Whole Shack Shimmy is a dance set to a mashup of Britney Spears’s “Toxic” and The B-52s’ “Love Shack.” The choreography is exactly what you’d expect from a song with such a combination. Fast, chaotic. It’s a fun dance that requires an hell of a lot of coordination.

Another dance trend was set to a unique mashup of 50 Cent’s “In Da Club” and The BeeGees’ “Staying Alive.” Two absolute slappers that need no introduction. The choreography though? A league of its own. Less tricky, more vibey.

Then there was a challenge set to Cardi B’s “Up”. Less vibey, more high-octane. Remember when we croaked on about how TikTok dances don’t utilise the lower half of the body? This one completely breaks that rule. Expect to see (and feel, if you’re participating) a smorgasbord of jumping and twerking.