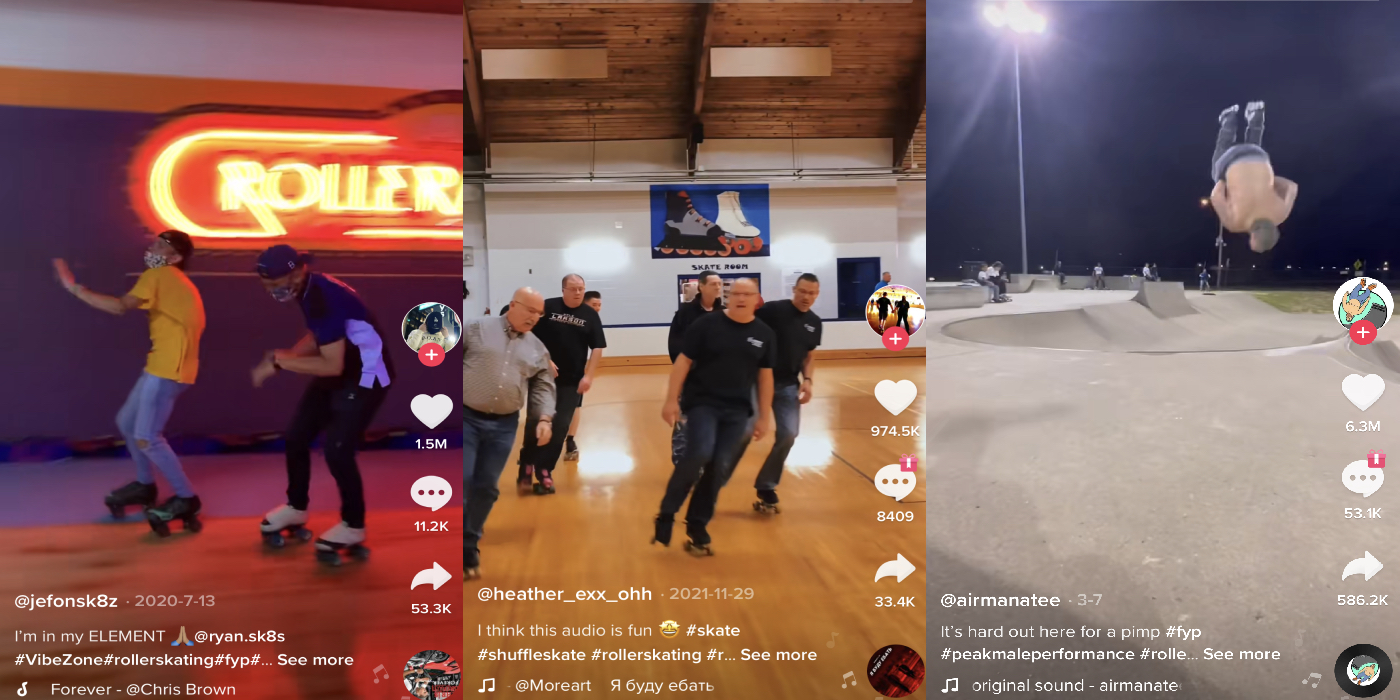 During the pandemic, millions found themselves looking back to simpler times: personal photos, old TV shows, anything to get their heads away from current, troubling developments. They baked bread; they hosted virtual pub quizzes. Over on TikTok, they got really into roller skating.

The roller skating resurgence of 2020 can now safely be described as a phenomenon. On paper, it all makes sense. Catchy, remixed music. Colourful vintage aesthetic. “So-Cal”. An element of challenge to it. It was like catnip to plucky TikTok users looking for the newest trend.

Between March and May 2020, Google searches for the sport more than doubled while Moxi Skates and Impala, two roller skate giants, reported an upsurge in sales. “Demand has definitely been off the charts,” an Imapala spokesperson said. “And we have been hustling to keep all sizes and colors in stock.”

How did this happen? Who are the stars of modern roller skating? Should you buy a pair? Worry not. We have you covered.

Is roller skating coming back? 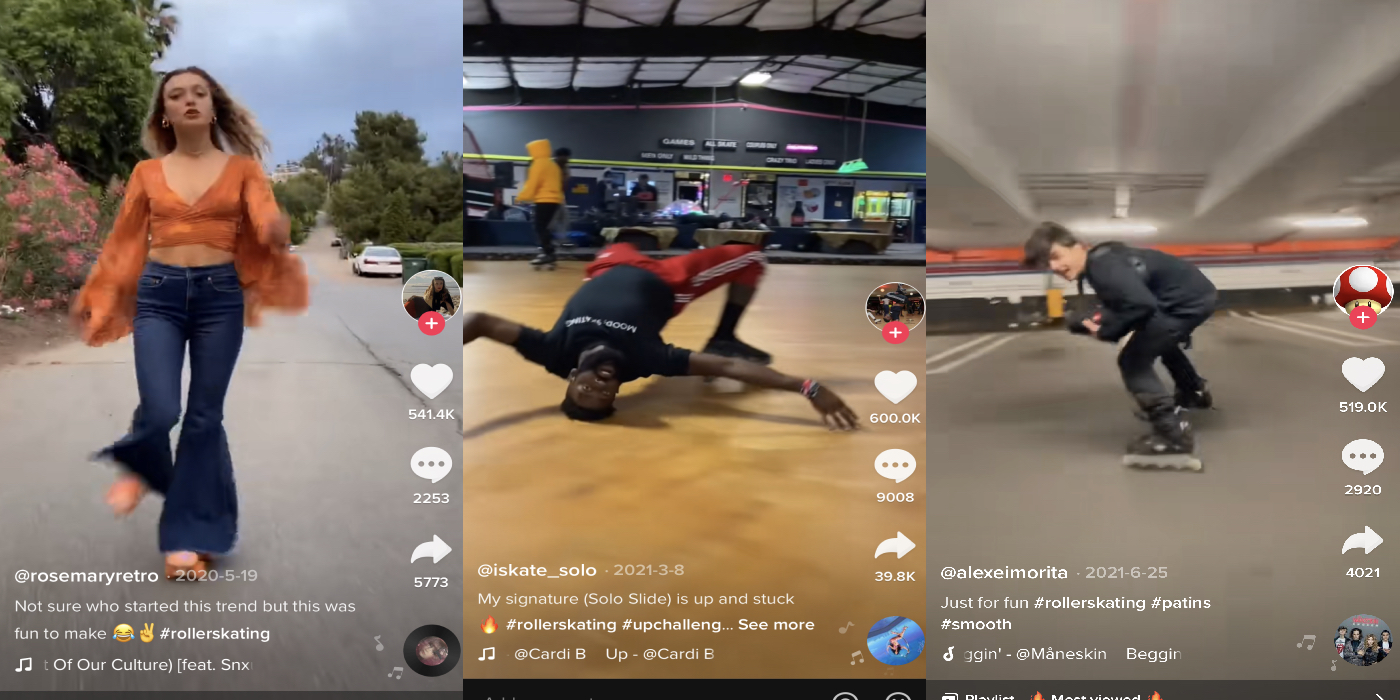 Isn’t everyone getting a little bit overexcited at a new TikTok trend bound to suffer the same fate as the ones before it? Do we have reason to believe that roller skating is coming back and will see us out in style for the remainder of the so-far bizarre 2020s?

Yes. Absolutely. 100%. There isn’t anything in the world that is coming back more than roller skating. The TikTok hashtag boasts 7.2 billion views, which is nearly enough for each of the planet’s 7.7 billion people to have participated. Its contributors are eclectic and diverse, making it one of the most inclusive communities on TikTok.

In January, Roller Planet, a new multi-platform, digital streaming service targeted at roller skating consumers, was launched to capitalise on this resurgence. Roller Planet’s initial offering provides the 12 million roller skating participants across the United States with exclusive access to original content. It will live stream national and regional roller sports. “Roller skating has seen a resurgence both in rinks and outside in the bowls, parks, and beach boardwalks. It’s a dynamic part of pop culture and we’ll provide the sights and sounds consumers covet,” said Robert James, Roller Planet President and CEO.

There are two membership price options for punters: $3.99 per month or $2.99 per month (25% discount) when committing to a 12-month recurring purchase. Content on Roller Planet is divided into six categories. “Groove” displays the moves and routines of skating’s top dogs. “Parties” shows viewers Roller Skating Jams from Atlanta, Cleveland, the West and East Coast. “Instruction” lets the country’s top skating intructors to share their tips of the trade. “Profiles” offer an insight into the lives of skaters, dancers and the industry at large. “Sport” covers Inline Hockey, Speed Skating, Ball Hockey, Artistic Skating and good old Roller Derby.

How did the TikTok roller skating trend begin? 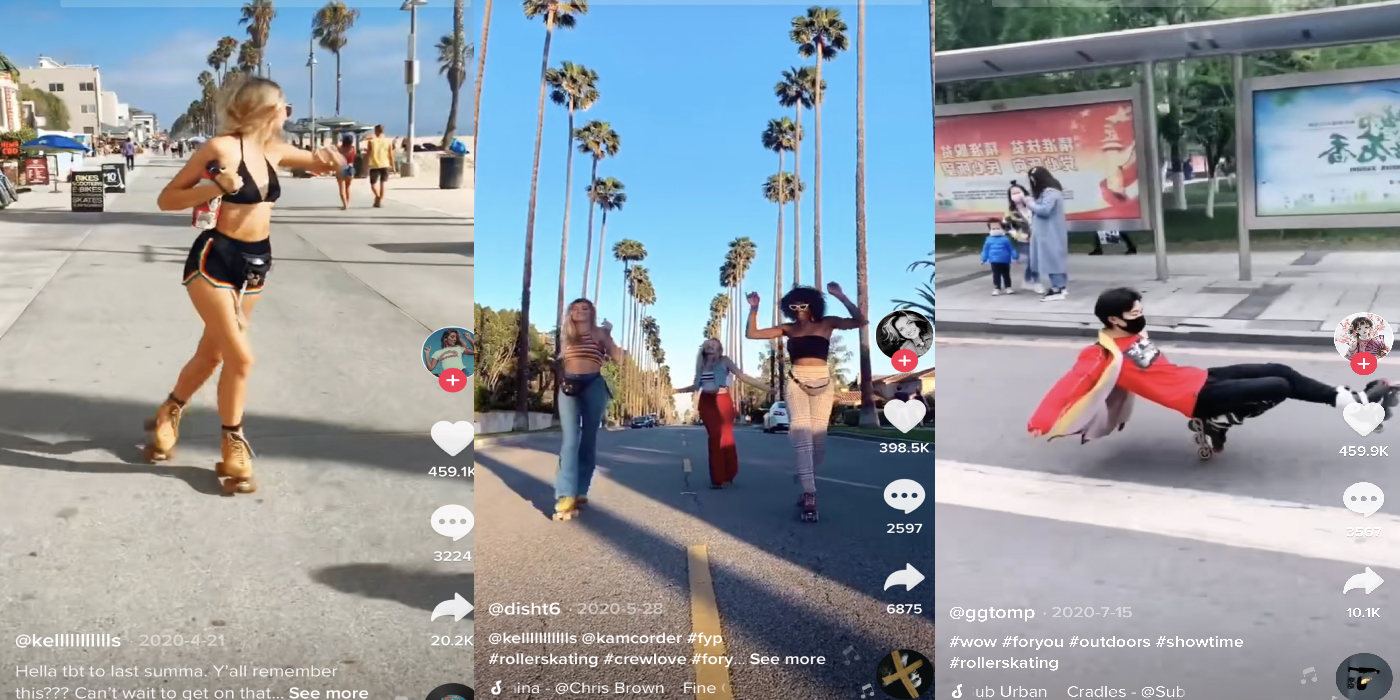 Technically, the roller skating trend began in the 1760s when Belgian inventor John Joseph Merlin attached two wheels to each of his shoes and slid into a dinner party only to smash into a full-length mirror. A hundred or so years later, James Leonard Plimpton patented the four-wheeled skate. By the turn of the century, roller rinks were a booming business. But what about TikTok?

While it’s practically impossible to locate the first-ever roller skating video on the app, it’s understood Ana Coto’s video of herself skating down a residential street to Jennifer Lopez’s ‘Jenny From the Block’ served as a catalyst for the movement. It’s the video subsequent roller skaters have thanked for inspiring them to get out and have a go.

Coto’s video is short and sweet. The wavy hair, transparent sunglasses and high-waisted pants simultaneously serve as a nod to the past and vision of the future.

There is no text involved, and no political point to be made through the enticement of visuals. It’s just Coto skating down a street in the late afternoon soon to an early noughties banger. That’s a tune we can all skate to. At the time of writing, her video has 2.5 million likes.

Who are the major players? 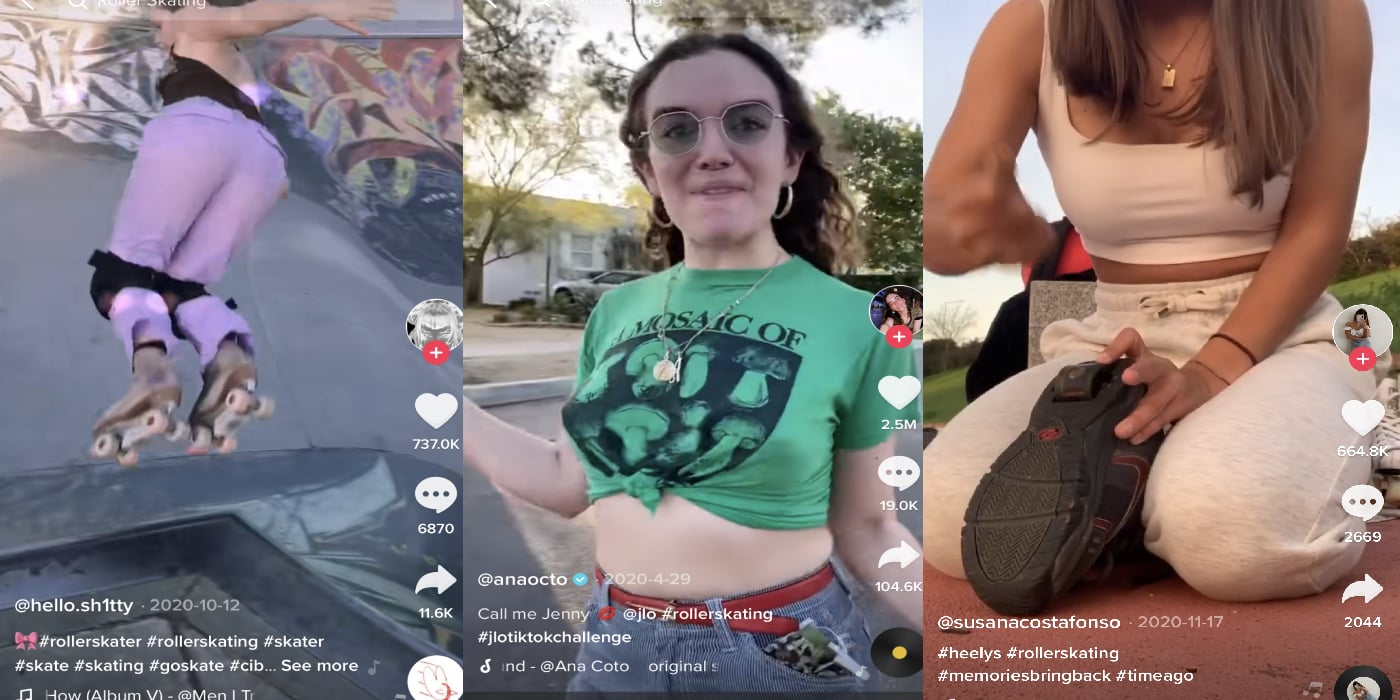 Who is the roller skating girl on TikTok? Who are the VIPs? Well, Ana Coto for starters. But we’ve already told you how much of an OG she is to the return of roller skating. How about those she’s influenced?

Marician Dedeaux Brown, who serves in the Marine Corps and lives in California like Coto, starting skating three months ago after seeing it on social media. “I was scrolling through TikTok and saw these great women skating, and it just inspired me to buy a pair of skates and I just fell in love with it,” she told BuzzFeed News.

Another, less risk-averse skater, is @hello.sh1tty, who instead of just vibing along Venice Beach, puts her limbs on the line at skate parks. In her videos, you’ll see her come off ramps doing flips so complex we’re not even sure what they’re called. One TikTok, of her doing said flip with a cutesy backpack, has 4.5 million views.

A different kind of account is the @pfskatingcenter which serves as a great tool for budding skaters looking to get into the sport, especially in a rink environment. The guys over at @pfskatingcenter have done tutorials on what not to do at a rink, how to skate if you’re a complete novice and - if you’ve got mad skills - how to skate backwards.

What songs are used? 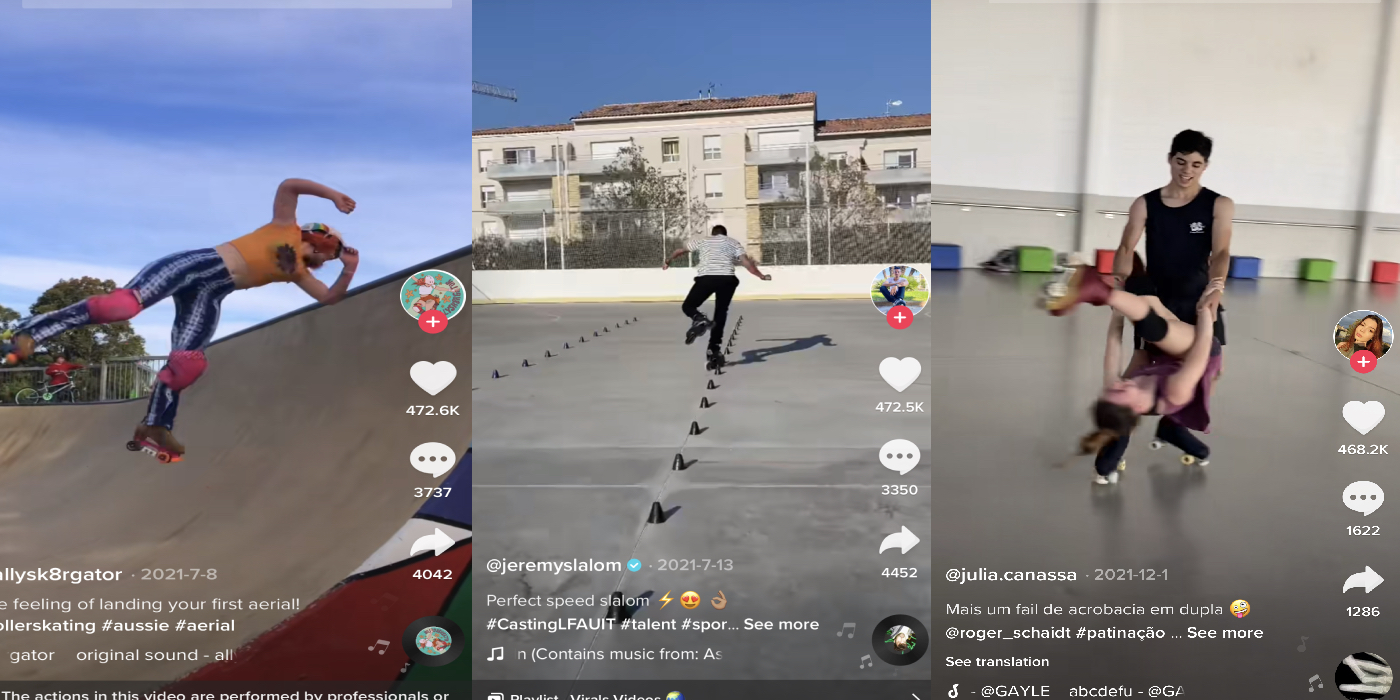 Though older examples of roller skating footage tends to follow a disco-y soundtrack, in 2022 you get a more mixbag of music accompanying roller skating videos, from metal to drill, proving just how diverse and far-reaching this sport is at the moment

And then you have songs that are designed to be played alongside roller skating. The music video for Victoria Monet’s ‘Experience’ centres around a group of happy-go-lucky throwback skater types having the time of their lives at a rink. The tune itself isn’t all that bad – definitely something you could pace in a circle to for a few minutes.

There are no rules. If you think a certain song works, give it a go. This is one of the more versatile communities you’re likely to find on TikTok.

What are some of the best roller skating TikToks? 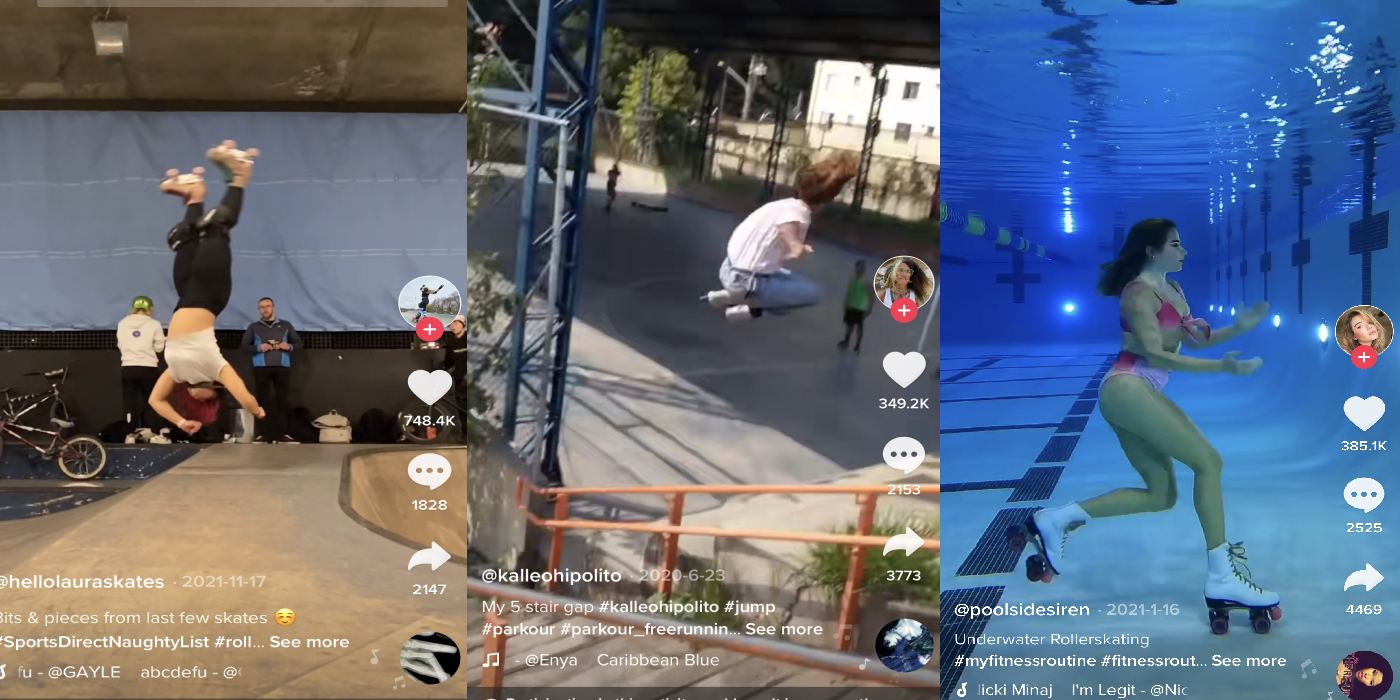 In need of some inspiration? Maybe you’re not bothered to participate. Maybe you just wanna watch other people do their thing, be that doing crazy gymnastics, decorating skates, or merely taking in that summer breeze along the beachfront. That’s cool.

This video might be a good starting point, showing a genius placing two chalks in her toe stops and scribbling some graffiti onto the floor by way of skating. If you are wanting to participate, probably don’t try this one until you’ve got the chops and/or a permit.

This TikTok of middle-aged dads collective skating in sync at a Pennsylvania rink shows that the sport isn’t exclusive to young women. The video, posted by @heather_exx_ohh currently has just short of 1 million likes. Do look at the other content on this account – the same dads, sometimes together, sometimes rolling hand-in-hand with their partners. Very wholesome stuff.

“You might not like it but this is what the peak male athletic form looks like, and there ain’t a f***in’ thing you can do about it.” Words that are now etched into rollerblading and TikTok folklore. @Airmanatee stunned the online world when he uploaded a video of him landing a backflip off a ramp (with his hands in his pockets). If this doesn’t whet your appetite, you’re a lost cause.

What are the best skates? 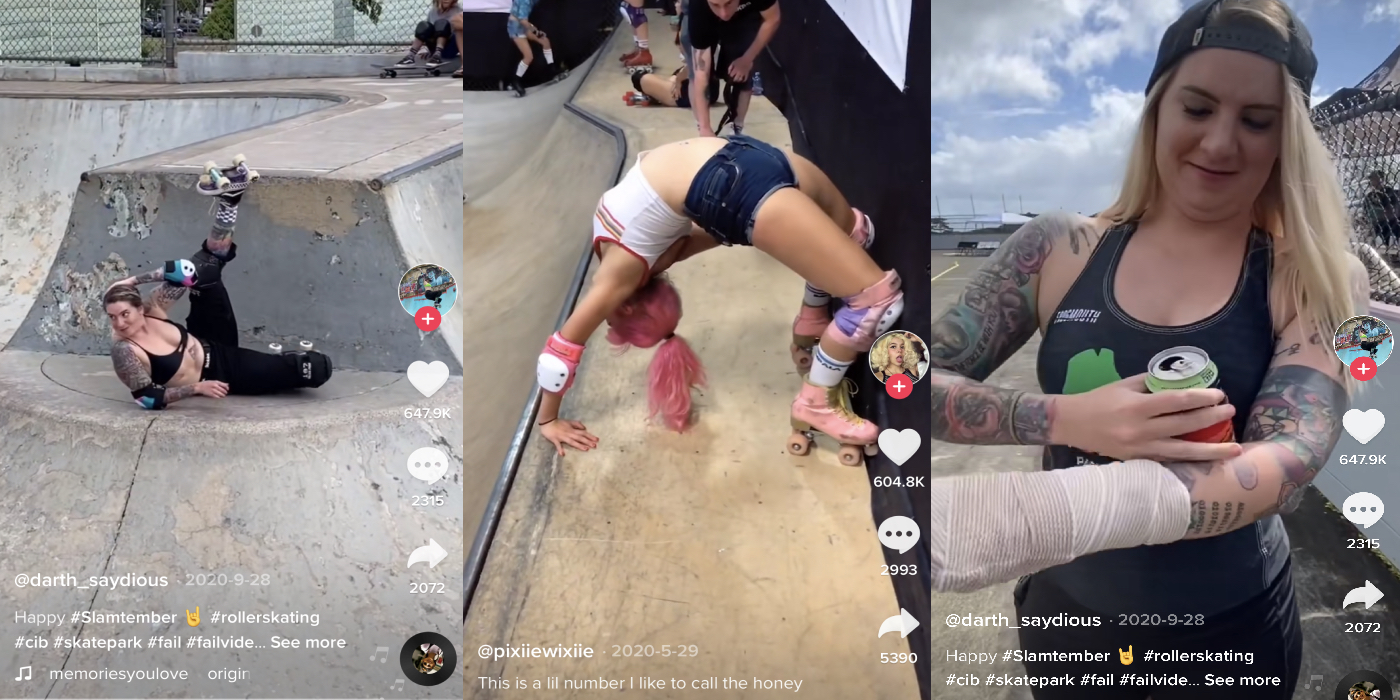 Fancy getting out there yourself? You’ll need some skates. There are two main types: quad stakes and inline skates. Both are good but they cater to different aspects of the activity.

Quad roller skates are the ones you’ll see 99.9% of the time on #rollerskating. They’re the ones with four wheels and a toe stop. The ones you’d get a roller rink or wore as a kid. These are the perfect option for beginners as they provide better balance and grip.

Inline skates AKA rollerblades have a greater resemblance to ice skates. While also four-wheeled, the wheels are lined up in a row and not side to side. These are more of an X-Games, serious alternative of the roller skate. Something you’d get if you wanted to grind down metal bannisters and have a plate put in your head.

Not to sound lame but if this is your first time, whichever skates you get, you’ll maybe want to think about buying some protective gear. Falling over hurts. Falling over on wheels? Not worth the gamble. Hit up Moxi Skates and Impala for all your skating needs and good luck!