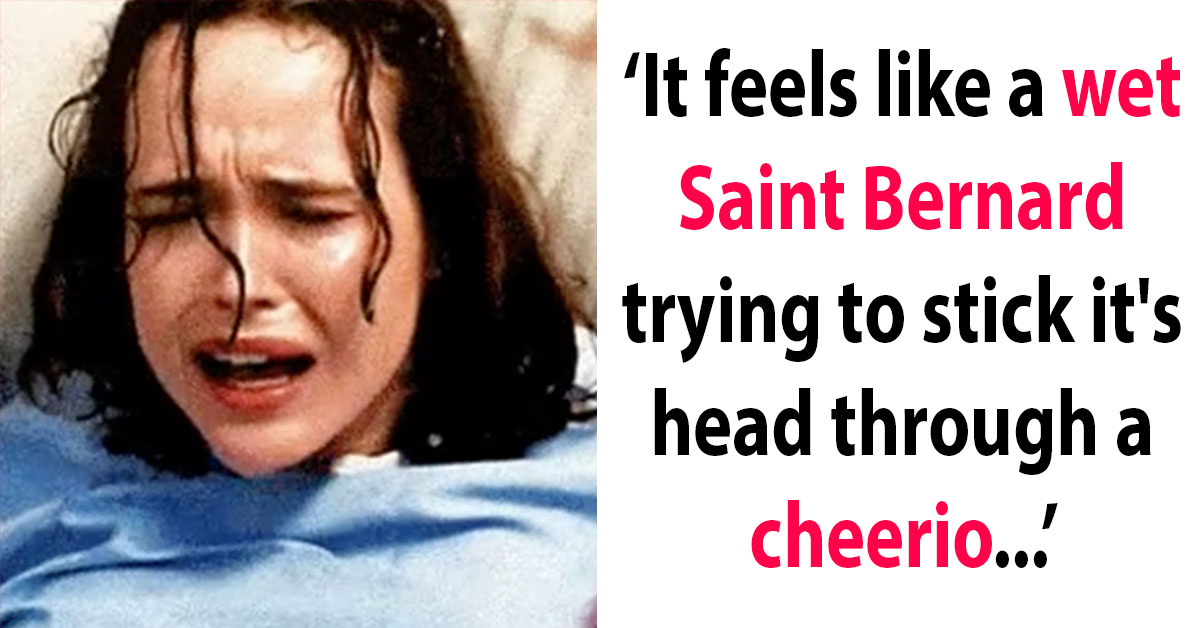 For moms, it goes without saying that childbirth is a uniquely horrifying pain that the rest of the world just doesn’t seem to understand the extent of, and yet frequently claims to.

This has prompted some moms to take to the internet in order to set the record straight for those who may be curious as to how childbirth actually feels… and boy, some of these descriptions are doozys! So strap in, and brace yourself, for 15 of the most horrifying and occasionally hilarious descriptions of childbirth!

1.) ‘It’s like a watermelon going through a lemon on fire’ 2.) ‘Childbirth felt like a nine-pound soccer ball with razor-sharp scissors sliding up and down my uterus and lower stomach’ I feel like I’m going to pass out just reading and imagining that! Anything that includes the phrase ‘nine-pound soccer ball with razor sharp scissors’ is bad enough on its own.

3.) ‘I remember learning about medieval torture/execution methods, in particular the one where they tie each of your limbs to a different horse and the horses trot off in opposite directions until they literally rip you apart. That’s what childbirth felt like for me’ Medieval times were savage! This is the kind of thing that you read and instantly wish you hadn’t read it, just begging for the words to retreat back from your brain, turning your thoughts back to simpler times.

4.) ‘Being smashed with a sledge hammer This description of back labour came from Leigh Anne O’Connor, an International Board Certified Lactation Consultant (IBCLC), so she knows what she’s talking about… which is comforting!

5.) ‘My C-Section felt like a 300-pound man was sitting on me while someone else gutted me and ripped out all my organs’

Take note fellas! Next time you’re whining about a cold, just take a moment to think of this image and be thankful you’ll never have to suffer this!

6.) ‘I had a natural water birth and it felt like I was dry heaving out of my vagina’ Hopefully you aren’t reading these while having your lunch! And if you are… you’ve got a much stronger stomach than me!

7.) ‘There is simply no comparison to describe the pain’ I think this one is possibly the most actually disconcerting as it leaves the imagination to run rampant with thoughts of the horrors that childbirth holds… it’s all worth it in the end though, just keep thinking that!

8.) ‘Like trying to put my lower lip over my entire head’ This is perhaps the most famous (or infamous) description of childbirth, courtesy of Carol Burnett… thanks Carol, I’ll never be able to get that out of my head for as long as I live.

9.) ‘You get stretched and torn and squeezed like a human tube of toothpaste. 0/10. Do not recommend as an experience’ If I’m honest, the image of someone squeezing that tube of toothpaste like that distressed me almost as much as the quote! Squeeze from the bottom not the middle you psychopath!

10.) ‘It feels like a wet saint bernard trying to stick it’s head through a cheerio’ I mean, top marks for creativity here! Probably the funniest and most bizarrely effective description on this list! I’ll never eat cheerios the same again!

11.) ‘Giving birth to all four of my kids was different, but the same in the fact that it felt like my insides were stretched to their breaking point and then dragged raw on flaming sandpaper’ Congrats for going through that four times! That description would be enough to put most people off even having one kid, but to go through it four times… well, I’m lost for words!

12.) ‘Childbirth felt like my baby was coming out of the wrong hole’ That’s not how it works thank goodness; although, poop does happen every now and then for some mothers so you should be prepared for that possibility!

13.) ‘It felt like the chest-bursting scene in Alien, but coming through my back (yay back labor)’

Babies can seem like aliens when you first get them, you don’t know what they’re saying, they’re struggling to understand how human society works, and they drive those little flying saucers around… oh what? You never let your kid drive around in a flying saucer? Health and safety has gone mad nowadays! Yep, get that out of your head when you’re buying your new child their first build-a-bear, the whir of the stuffing machine and the lifeless, dejected face of the empty bear will haunt your dreams forever.

15.) ‘Feels like having a pregnant chicken explode in your intestines’

I mean, chickens lay eggs for one thing so… Also, why is the chicken in your intestines, not your uterus, just say uterus? I can’t believe I’m actually going over the logistics of having a pregnant chicken exploding in the intestinal tract… my life took an unexpected turn at some point for me to end up discussing this…

Let me know in the comments which description will stick with you for the rest of your life, and be sure to tag any other moms to see if they agree with these analyses!