What is WitchTok and why is it trending? – TikTok Explained 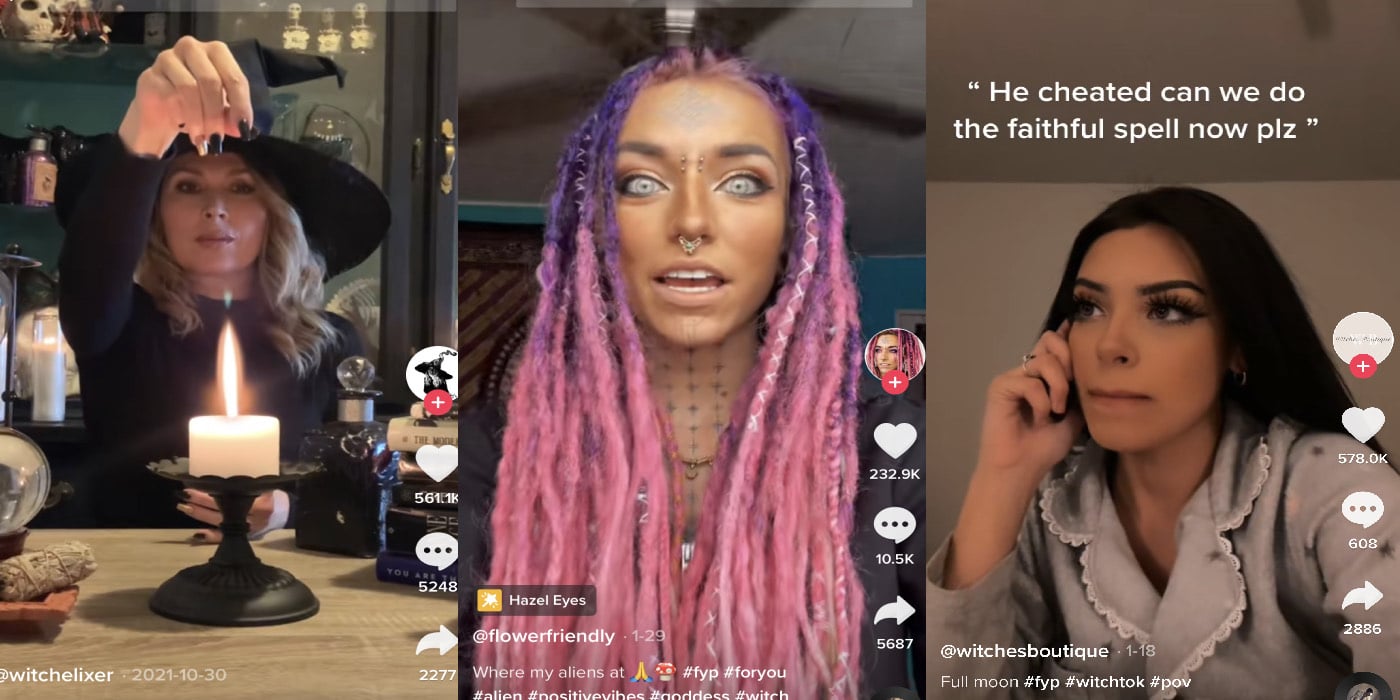 We need to talk about witches. Not the ones from yesteryear, who were chastised and ceremoniously drowned. Today’s witches get off a lot easier than their forebears. Why? Because they’re on TikTok. Instead of skulking around medieval towns causing panic and hysteria, they’re posting curated content for all to see – and at 25.2 billion views and counting, it’s not anything to laugh at.

Originating in 2019, WitchTok follows in the cultural footsteps of Cottagecore, Fairycore and Goblincore in that it isn’t merely an aesthetic but a way of life for those involved – something more traditional and historical in a digital world.

While many are turning to religion or plain old spirituality in light of pandemics and WW3 rumours, others are turning to witchcraft. Choosing a belief system that values nature is very fitting with the younger generation’s concerns surrounding ecological crises.

Okay, you might say, being one with nature and everything… what’s that got to do with witches? Don’t they just make potions and fly on broomsticks? Aren’t witches something I should worry about and not follow on TikTok? All will be revealed. 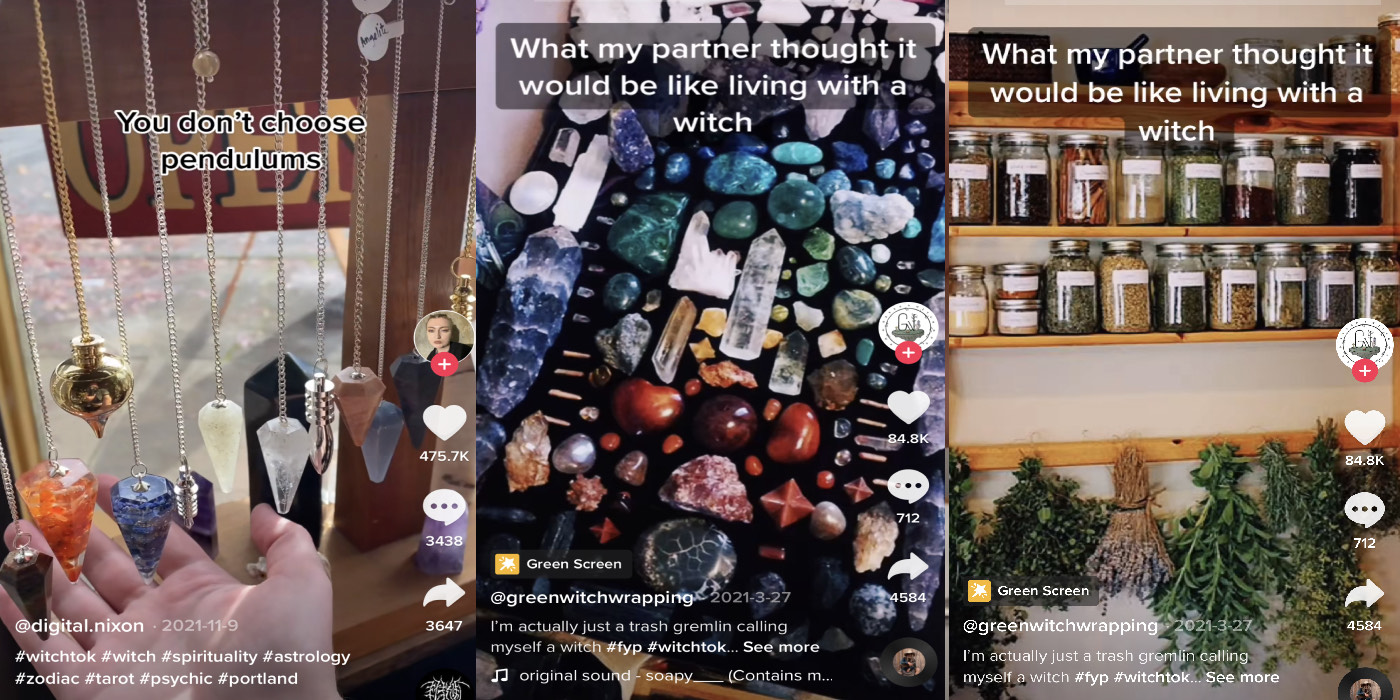 Tired of inane, modern content where everyone’s referencing things and people you don’t know or care about? Fancying something a bit more inclusive and friendly, not to mention timeless? WitchTok might be your true calling.

WitchTok is an online community of creators that practise all things witchcraft from tarot card readings to astrology and traditional spells. The TikTok hashtag boasts a massive 25.2 billion views as of April 2022.

Although in the same vein as Cottagecore, WitchTok doesn’t restrict itself to idealised, twee fluff. Here you’ll find witches putting curses on cheating boyfriends, explaining how to spot a fake crystal from a real one, and tutorials for protection spells that’ll oversee the well-being of your friends and family.

Sorry to disappoint, but there aren’t any pointy hats, broomsticks, or dangling, spotty noses to be seen here. This is modern witchcraft. They’ve moved with the times just like everyone else, letting go of some negative stereotypes and fashion choices. 2022 witches are a pleasant bunch… unless you cheat on them.

When did the WitchTok trend start? 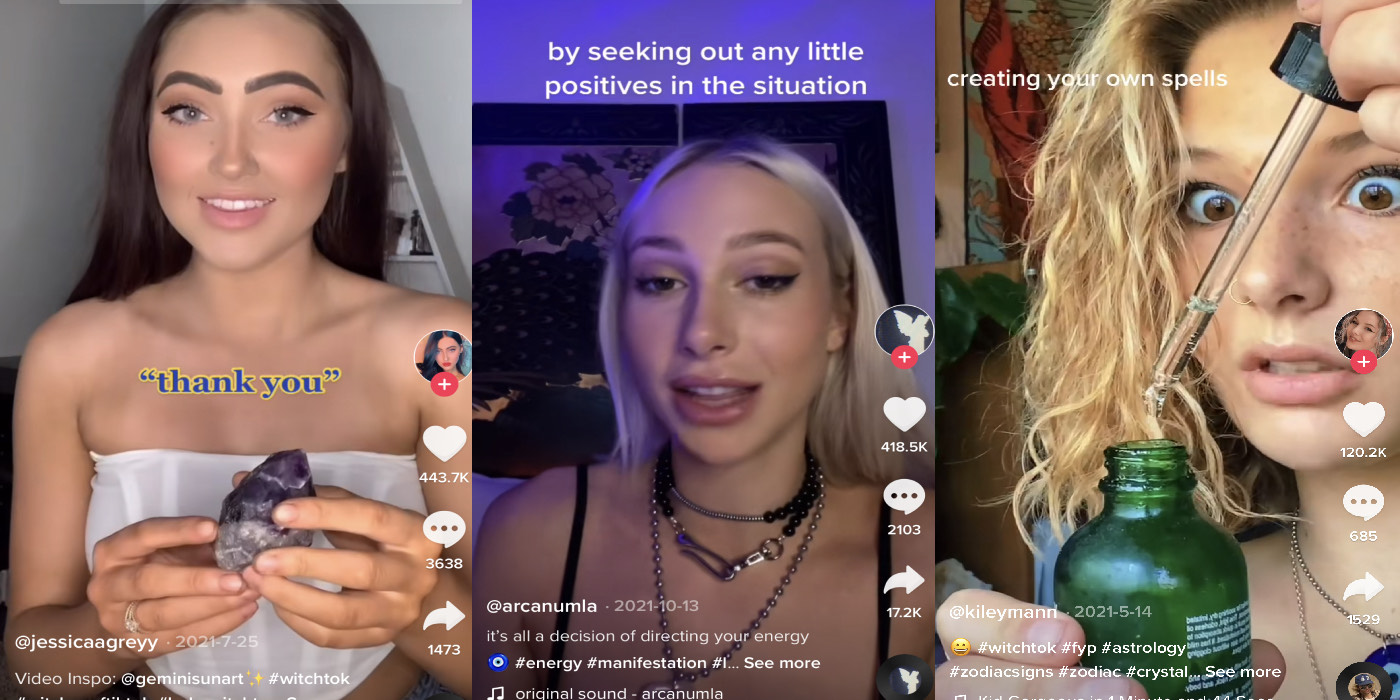 When did this all begin? Did one witch download TikTok and formally announce WitchTok and spark a billion-strong community that has likely given more global exposure to witches than anyone or thing before them? Not really.

There is no singular source for WitchTok. Like a lot of TikTok trends, most notably Cottagecore, it’s been around as long as the app itself. TikTok isn’t the first place 21st century witches have congregated online but there’s no doubting how perfect a platform it has proved for them.

Chelsea Shelby is a practising witch and founder of occult beauty brand Witch Baby Soap. She has 661.6k followers on TikTok and 15 million views. In other words, a modern day witching success. She credits the app with helping her open up to people.

“On TikTok it’s quick tips and things that anyone can do,” she told Wired. “It also humanises witches. There’s a lot of negative stigma surrounding witchcraft and witches but with TikTok, I can show the more personal side of myself, like being a mother.” 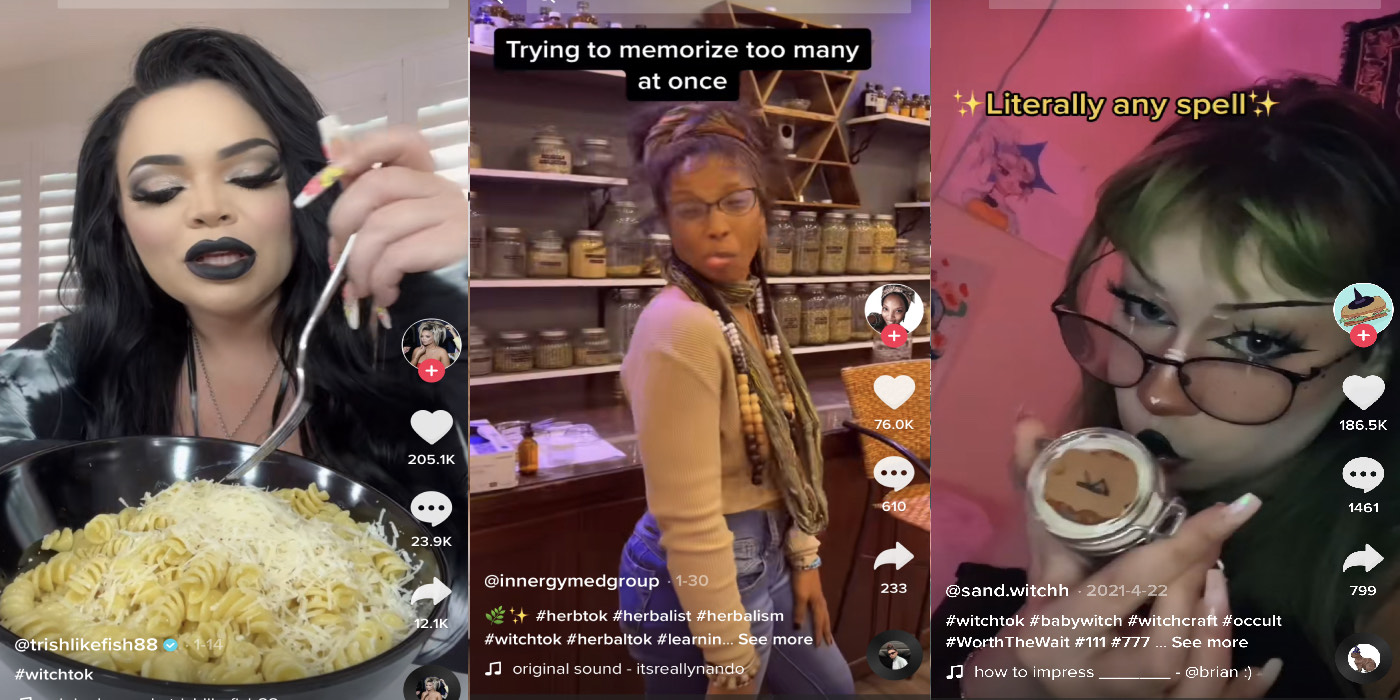 While the community itself is paramount to the WitchTok cause, getting the fashion aesthetic bang-on can be what separates you from all the other million witches out there. Though the movement does borrow from Dark Academia, goth and Steampunk, there are definitely a set of items that couldn’t be pinned down as anything else.

To dress convincingly on WitchTok you should look into purchasing astrology pendants, crystal amulets, generous amounts of silver jewellery and absolutely anything black. You’ll be amazed how far a stellar outfit can get you in this community.

Its influence has spread beyond TikTok in recent years. Fashion brand Rohk included huge amounts of WitchTok-inspired clothing into its spring 2021 collection, with long black gowns and thick black dresses with heavy white collars at the forefront. 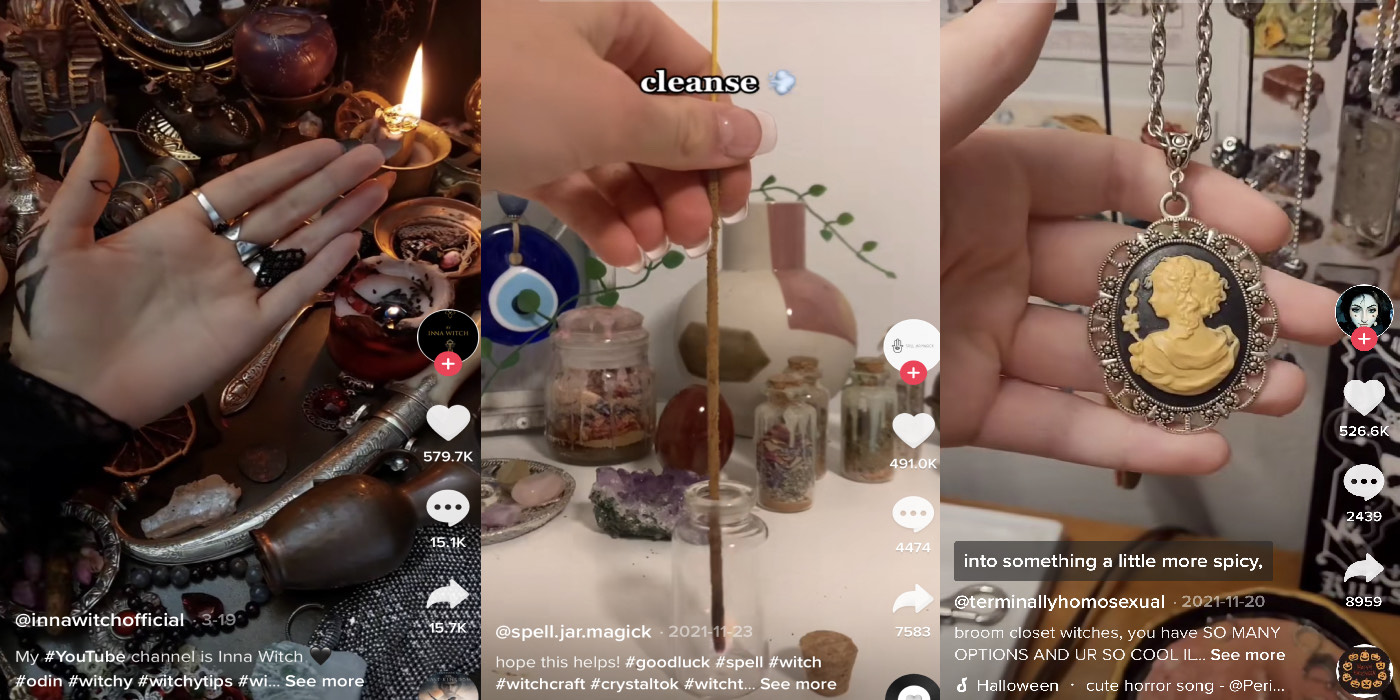 Remember that part where we said modern witches were a pleasant bunch? Yeah, scrap that. Some of them can be savage, as Blacklistgate proved. A blacklist? For witches? If you’ve got an image in your head a witch turning up to a nightclub only for a cynical bouncer to promptly turn them away, you’re on the wrong track. This blacklist hasn’t really got anything to do with society but rather TikTok.

Many and various are the things wrong with a social media blacklist of any community. As a base level, it’s spiteful. Spreading message of contempt for someone and calling for them to be exonerated from TikTok fame over their opinions, looks and beliefs is Not A Very Nice Thing™. It’s childish, it’s bullyish. Everything WitchTok really doesn’t want to be. Why trample on someone’s content who’s done you no wrong? Scribbling their name down in a burn book… what is this, Mean Girls?

Worst case scenario, this is a dangerous thing to do. Doxxing is a very real and very common practice these days. There are some oddballs out there. If those oddballs have access to your home address or where you work, things could get very messy. So if you’re thinking about throwing some WitchTokkers under the bus simply because you don’t like their stuff, think twice!

What does it cost to be a WitchTokker? 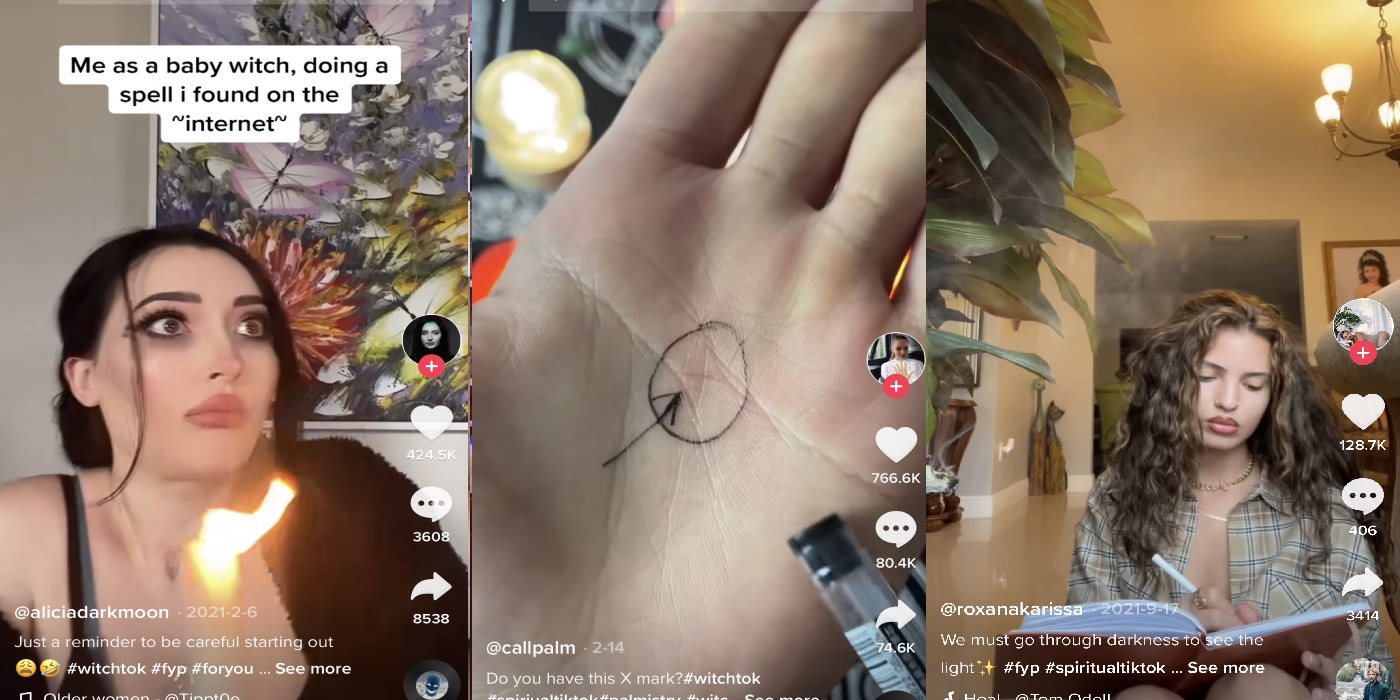 This might seem a strange question given that TikTok itself is free. What about the accessories? The items? The spell jars? This isn’t like rollerskating TikTok where you buy one pair and that’s it. WitchTok is a community that requires members to regularly cough up a bit of green so they can improve the authenticity of their content. Here’s why.

Say a witch grows their own herbs. They’re still going to need a nice glass vial to show them off. Other products include incense for cleansing needs and candles for sealing. These things are usually promoted across WitchTok so fear not if you’re striking out on Google. Among the businesses promoted on the hashtag, the most popular are small-scale independent retailers who sell crystals and tools. They’re even known to sell starter kits with everything a budding witch needs to perform magic. A kit like this can go for around £16. 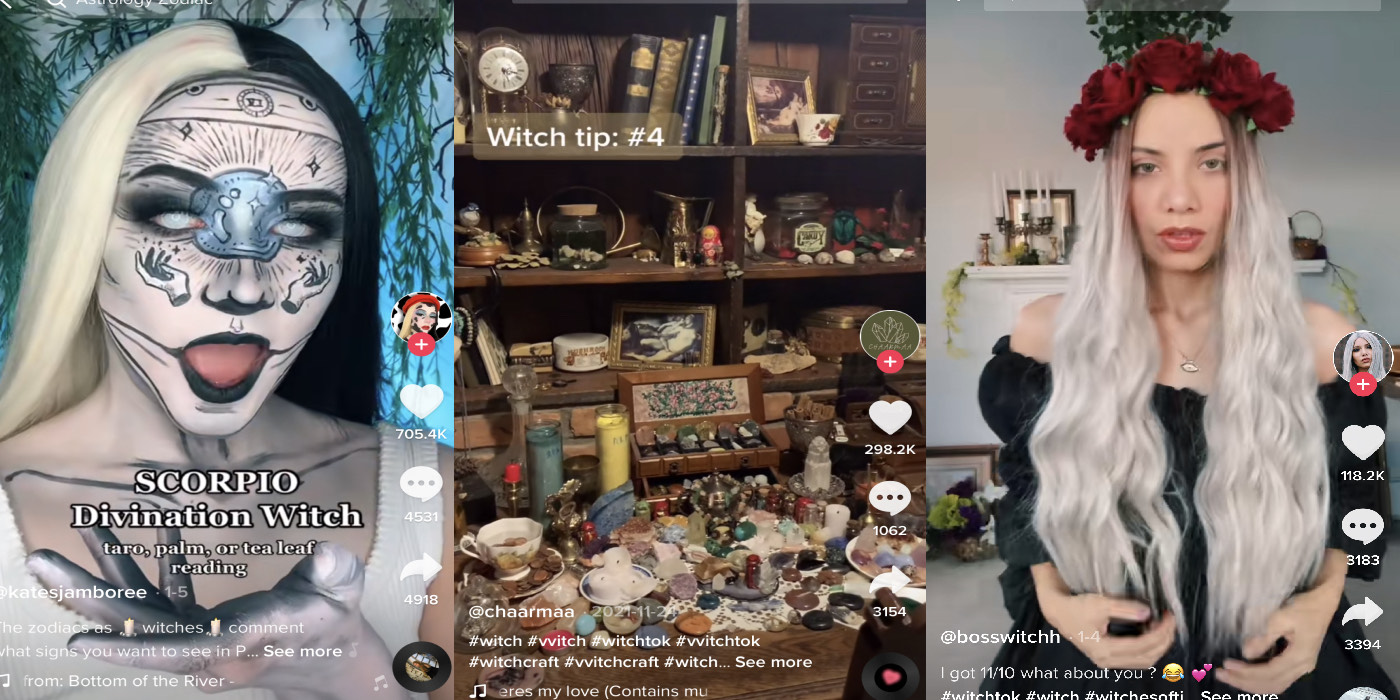 The moon: discuss. It’s got a nice shape, a decent shiny colour. It sometimes appears to us in 50% or 25% form, which can be interesting. Truthfully, though, unless you work at NASA or SpaceX, it’s probably not too big a deal. But over on WitchTok? Big deal. Very big deal. Some witches are out for its head.

WitchTok has caused a lot of drama since its humble beginnings. In 2020, there was a huge buzz surrounding younger members of the community, or ‘baby witches,’ placing curses on the moon, much to the annoyance of the witch elders.

Cursing or “hexing” is to cause harm or ill will to a thing or person. Now while this might be justified with a cheating ex, putting one on the moon - which by all accounts is fairly important to our survival - triggered some bitter words between the generational gap. Over on r/Witchcraft, it was revealed a group of witches had previously said they were going hex the fae; in other words, earthly spirits with magical or supernatural powers that will “most likely hex you back, and are probably more powerful than you,” explained Jaya Saxena, author of the book Basic Witches.

Saxena went on: “Within people who consider themselves witches, the moon is generally considered super powerful. The symbol of the Triple Goddess in Wicca is the moon! So if you’re on TikTok bragging about how you’re about to essentially attack the moon, people are going to get either mad at you, or laugh at you.”

What’s the difference between witchcraft and paganism? 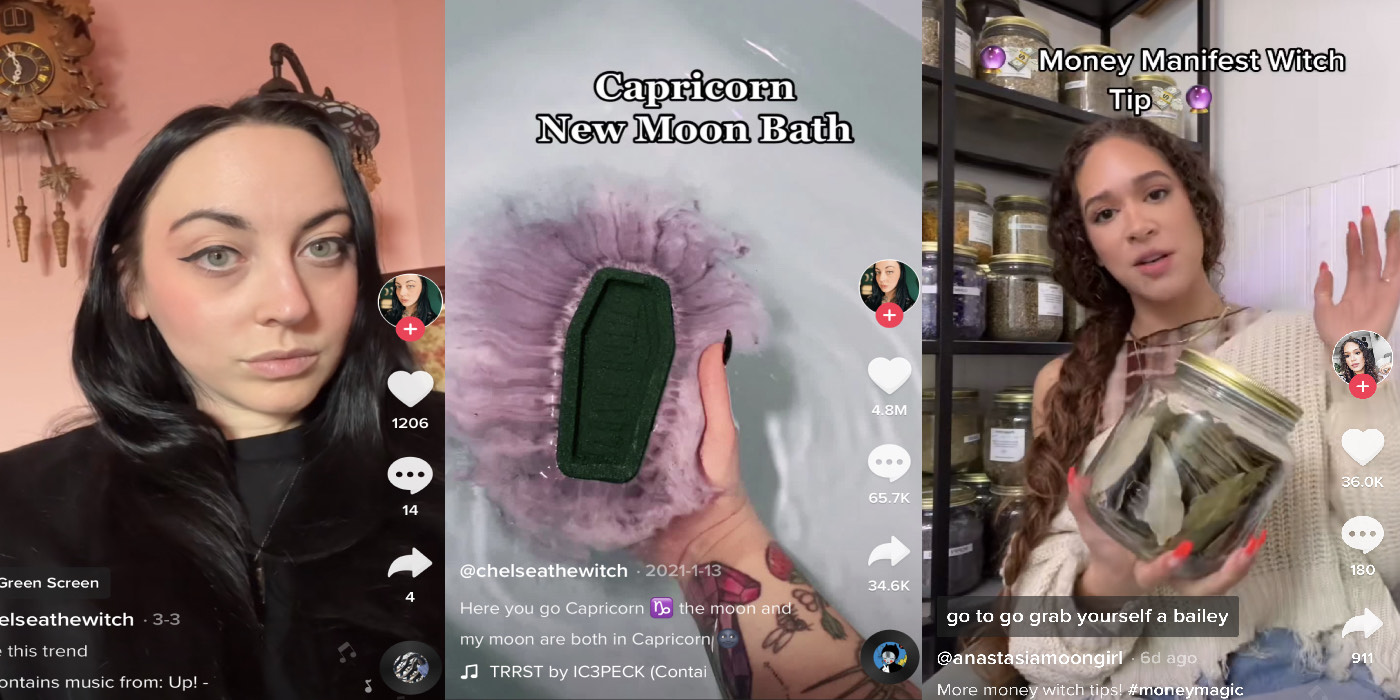 This might mean nothing to a neutral bystander but in WitchTok circles it’s very important. Witches and pagans are often wrongly bandied together. While there are certain similarities, they are subtly different.

Paganism is one of the oldest religions on Earth for a start, the elements of which are still observed today. A host of ancient civilisations followed some type of it, most notably the Celts across the UK.

Paganism is a polytheist religion, as opposed to a deity-free way of life like witchcraft, which means its adherents believe in more than one god or goddess. Lots of strands worship goddesses and the divine feminine, while others worship gods instead.

Pagans believe nature is divine as a result of a diverse nature. That’s where the similarities come in, as it’s through this devotion to nature that linked it with the occult. Pagans, like witches, believe they can work in harmony with nature to trigger physical and mental changes.